When Steam Crave design and create a device or an atomizer, they clearly design them on 85″ Screens, and then forget to down-scale the images when sent into production. That’s the only conclusion I can come to with Steam Crave, because the Hadron 220 is probably the largest device I’ve ever got my hands on, even compared to some triple 18650 devices, it still dwarfs them.

I’ve always been fascinated with Steam Crave, and I recently tried out the Steam Crave Ragnar RDTA and was fortunate enough to pair it up with this exact device. I’ve really put it through its paces, I’ve been asking a few main questions:

Big questions to ask from a big device but what is it like really?

Lets crack on and try out the Steam Crave Hadron 220w Mod.

What Can We Expect From The Steam Crave Hadron 220w Mod?

Ooh whats this? An attachment, that’s similar in size to a dual 18650 device, which attaches to the Hadron and turns it into a squonk mod?

Something not seen before, a bottle attachment that can hold 16ml of e-liquid and converts the Hadron from a dual battery mod, into a dual battery SQUONK Mod.. Very clever, but is it a bit like sticking a cheap extension with the wrong bricks on the side of your house?

The Hadron includes a respectable and accurate YiHI SX480 chipset, can hold up to a 35mm atomizer before overhang and takes a variety of batteries. Just to put it into perspective, I’ve compared the size of the Hadron against another Dual 21700 device – The Augvape VX217…

As you can see, the comparison is ridiculous. I received the Gun Metal variant of the Hadron, its a very dark grey with a slight grainy effect to it.

I’m sure it’ll chip off if you happen to drop the device, but it feels like very good quality paint. The zinc alloy construction is strong and solid from top to bottom, the design itself is a little boxy with curved off edges on each corner.

Up top is a nicely sized fire button which has a real nice clicky click, below that is a bright clear colour screen and at the bottom are 3 additional buttons along with your Micro USB port for firmware upgrades. Being a YiHi Chip, you can assume there may be updates that are worthwhile in future.

Yes its heavy, yes its bulky but its actually not bad once you get used to it. I’m pretty sure my forearms have grown an inch, and that from holding this mod, not anything else…honestly…

But the Hadron grows on you, starting off as an over-the-top device and ending up as an attachment to your arm…weird..!

It’s a large weighty device with plenty of girth but it does feel like its worth a few quid too. Which is a good thing considering the Hadron is priced around the £100 mark.

The colour screen on the Hadron is excellent.

Its nice, bright and extremely clear and to be honest I wouldn’t expect anything less from a YiHi device, even in direct sunlight I can see the screen. However in the menu options screen, the text does turn a little fuzzy.

There are 3 buttons to worry about along with the fire button.

Within the main menu is a small number of additional options. How Does The Steam Crave Hadron 220 Perform?

I’ve pretty much used the Steam Crave Ragnar RDTA on the Hadron during my testing. Mainly because its perfectly suited to the Hadron.

My main aim was to really see if the Hadron can be practical for daily life, so lets answer some questions…

Can the Hadron be practical?

Kind of – it’s practical enough if you’re driving as long as you have a large cup holder to place it in, it’s not the most ideal device you can hold comfortably whilst driving unless you’re on a motorway or somewhere when you’re not making regular turns.

Also if you happen to be walking down the street with the Hadron in your pocket, I hope you have a tight belt on because I’ve nearly been caught with my shorts round my ankles thanks to carrying the Hadron in my back pocket. Not the best when putting the bins out 🙂

Can the Hadron be used at work?

Being an electrician, I’ve usually got somewhere I can place the Hadron whilst I work.

If you happen to be on your feet all day, with the Hadron likely to be in your pocket, you should end the idea of using this as your daily mod right now because its just too big and heavy. However if you’re always likely to have a home for the Hadron on your desk, or in your car, then I don’t see why you cant enjoy the power and battery capacity of the Hadron day to day.

Can the Hadron be carried comfortably?

As long as the Hadron isn’t in your pocket! You’ll soon become very comfortable handling the Hadron each day.

Will its size be more of a hindrance than a benefit?

At times, the Hadron has been a hindrance.

In some cases I’ve had to hold it and carry less other things rather than just sticking it in my pocket and carrying everything I need to as I go about my job.

But the benefits are clear – Its a large dual 21700 device with very good battery life, an excellent chip and great performance.

But it certainly makes the Hadron more versatile and I have no doubt we’ll see more of this in future. You may notice on the back of the Hadron there is a weird shaped rubber bung in place. Its there where the squonk bottle attaches and can pump e-liquid through to the 510 pin.

Its fairly simple to put together, although there are a handful of screws that were rolling around in the backpack box which I almost lost and there didn’t appear to be any spares just in case. I remember seeing a prototype of the backpack squonk attachment at Vaper Expo in Birmingham in October 2019.

At the time, it really was a prototype, a large silver block with a squeeze bottle on the side. Its clear Steam Crave has refined the design and made it miles better than the monstrosity I saw at Expo.

Featuring a 16ml e-liquid capacity and a ‘Revolutionary Pump System‘, the squonk backpack has the same build quality of the Hadron itself, and the same gun metal finish.

Its beautifully shaped to match the Hadron, however when installed, and once you remove the bungs and fit the screws, it doesn’t really do any favours for the general look of the device, it looks extremely bulky. The backpack is filled simply by removing the large silver cap at the top, and the plastic viewing section is clear enough to see your e-liquid level, but its not perfectly clear.

The little black button on top is your pump, and using the mesh deck, the pump system works very very well. However it does take some getting used to as its very easy to over-squonk – very easy. 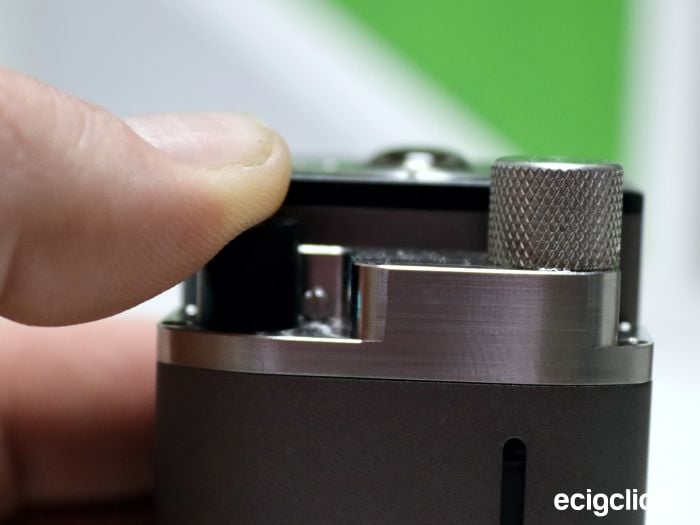 I’ve actually lost count how many times I flooded the deck by over squonking…that’s probably due to being in such a habit with the Dovpo Topside Dual – but in the end I got there.

The pump button does work really well, however I haven’t noticed any suction back down into the backpack which I think is a bit of a shame, especially as it squonks quite a fair amount of e-liquid. I feel like I’m being pretty critical on the backpack. But in essence, the backpack is an excellent idea and it has been implemented really well.

I think its just the fact it adds so much more size to the Hadron. But if you like to squonk, the backpack works effortlessly once you get the hang of it.

I really do feel like I’ve been super critical on a device which I actually really enjoy using.

That’s probably because I generally focus on ‘Ease Of Use’ with most reviews. Its all about practicality and the less time you have to faff around with it, the more you can enjoy it. With the Hadron, and even with the backpack there isn’t really much faffing around involved, so it must be its size that’s bothering me.

This is a HUGE device which nearly doubles in depth once you add the backpack.

But I love it! Yes its massive, yes its heavy but it has a great power output, awesome battery life and with the right atomizer on top its an absolute joy to use once you get the hang on it.

It’s become my desktop vape and I’ve emptied the 18ml tank TWICE on the Ragnar RDTA whilst typing this review!

Have any questions about the device?