The Steam Crave Ragnar RDTA review and to call this tank a monster is an understatement!

In fact, just how many synonym’s can I find for the word ‘massive‘? Lets find out! If you know Steam Crave, you know what they’re known for…big tanks! The Aromarizer Titan was a mighty 41mm in diameter and held up to 28ml of e-liquid. Massive.

SteamCrave hasn’t really done anything on the smaller scale apart from their Glaz MTL RTA tanks for a more discrete vape. So I’m not surprised they’ve gone back to the larger scale and have come up with the Ragnar.

This is the first time I’ve got my hands on something from Steam Crave other than the Glaz MTL tank, and I’ve been fascinated to see what all the fuss is about with these huge tanks.

What Can We Expect From the Steam Crave Ragnar RDTA?

With a 35mm diameter and an 18ml tank capacity the Ragnar clearly stands between the Titan and the fairly recently released Aromarizer Plus V2.

The Ragnar isn’t like most RDTA’s which generally have the deck on top, with the e-liquid section usually positioned below the deck.

The Ragnar is still classed as an RDTA however, as the cotton saturates from below with a bit of help from the juice flow control system and the e-liquid section placed on top like a traditional RTA.

Additionally, the Ragnar can fairly easily be converted into an RDA! More on that later. The Ragnar also has the ability of making use of a chamber reducer so you can use the large array of decks that were released for the Aromarizer including the mesh deck kit, the series deck, post-less deck, velocity deck and the single coil deck – nicely done.

Along with all these very fancy things, the airflow control system is also very clever which allows side, and bottom airflow with a plethora of options.

So let’s crack on and see how this performs!

This was sent to me free of charge for the purpose of this review, as always my views are my own. Did I say this is a massive tank? I did? I received the gunmetal version of the Steam Crave Ragnar RDTA and the moment you pull it out of the box, you feel the weight, and you appreciate the quality. One of the first things I do with a tank review is take it fully apart and try to understand exactly how it works and how it all goes back together.

I took extra time with this one, and I’ll be honest, at first I was a little baffled as there are a lot of moving parts, and like I said, this isn’t your traditional RDTA. With the Ragnar, taking it all apart was a joy.

Yes there are a lot of moving parts, but every part is very nicely threaded and the machining and quality is very good.

Additionally the seals and o-rings aren’t too tight but seal everything up nicely.

At the top is a 22mm wide bore drip tip.

The sightly marble blue drip tip on this one is very nice, and it also has an inner stainless steel section. It is however, positioned quite stiffly but it can be removed eventually and you can use your own 810 drip tips if you so wish. Once you’re down to the inner chamber, you start to understand the inner workings of this tremendous RDTA. The Ragnar comes with the post-less deck as standard, along with multiple deck options available as separate purchases (more on those soon). The included deck is large enough to fit 2 large coils, or one single coil if you prefer however as these decks are replaceable, its easily removed from the Ragnar base itself and can be fitted to any device you like via the 510 threaded base for building on.

I’m a huge fan of juice flow control in RTA’s.

It’s very simple, it allows the user to restrict firstly how much e-liquid is fed into the base of the tank, and also is very handy for when you’re filling the tank. The additional feature of juice-flow control is if you’re using a thinner e-liquid, you can limit how much e-liquid is being fed into the base – very clever and very handy…trust me.

Featuring 80% side and 20% bottom airflow, the Ragnar has a Vast amount of airflow options and is adjustable via the AFC ring which is situated below the juice flow control.

There is a lovely restriction to it and because of its position in relation to the deck, its less likely to leak.

The base itself can separate from the rest of the Ragnar and can easily be removed, of course at the base is all your usual inscribing along with ‘Designed by BJ Shi’  – I had no idea who he was to be honest but basically he is the mind behind Steam Crave, and the Vice President. So a clever guy with some epic ideas.

How Does The Steam Crave Ragnar RDTA Perform?

Once you’ve got your head around the size of this thing and how every part works and goes together, its time to stick a build in there. First off, being a post-less deck, its extremely simple to fit your coils.

I would recommend using a pair of decent large coils as there is a lot of room to fill – this one’s built for big coils. You can be as exotic as you like but I went for a pair of Alien Coils, trimmed them down to 4.5mm and got to work on positioning the coils.

Because of the mass of honeycomb airflow slots, you can play around with how close together or far apart you decide to place your coils. I found they work best for me like the picture below.. Once your coils are in position, its time to get to work glowing the coils to get that lovely centred glow. Be sure to keep your wattage low so that the coils can bed in nicely, it also makes it less stressful trying to strum out the hot spots. Because of the way the e-liquid is fed to the cotton, you don’t have to worry too much about the amount of cotton you use.

However its still possible to leak so like most RTA and RDTA’s you may find it’ll take a few re-wicks to get it right, luckily, it’s fairly forgiving. I found a gentle rake of the cotton at each end was enough, but just make sure you don’t force the cotton too tightly in towards the juice hole.

If that’s the case, you’ll find the e-liquid will have a tough time making its way to the coil. For me, I found that even though it looks like there is a lot of cotton packed in, its actually very well separated so it wicks beautifully.

The Aliens I’ve been enjoying in the Steam Crave Ragnar RDTA came out at 0.12 ohms and I’ve gone for some Raspberry Sherbet 0mg 70VG-30PG. At 120w, with the airflow set to one honeycomb open and larger punched hole open I’m getting a very decent vape. Very good flavour, slightly warm and a big cloud.

But…if you fancy being fruity, you can take that wattage up to 160w+ and still enjoy a vape that’s not too hot, but nicely warm and extremely cloudy. This tank will drain in no time if you want to!

I’ve also not experienced any lack in saturation of the cotton, even at those higher wattage. I wont lie I’ve had the odd leak on my first few builds. But as I say, once you get the hang of it, its very forgiving.

Generally speaking, this big tank is a colossal cloud chucker, but doesn’t really sacrifice flavour too much.

It really does come down to the airflow control however.

So there is a balancing act to play between coil size, airflow control and also the style of coils you install.

Steam Crave Ragnar RDTA – Not a One Trick Pony

The Steam Crave Ragnar RDTA has more than one trick up its sleeve, and I’ll be releasing another review looking at the mesh deck.

In simple terms, the Ragnar can be converted into a 35mm RDA, which works best in squonk mode with the mesh deck. And to get that, the first option is always Steam Crave. They just know what it takes to make a big tank work and they’ve been honing their skills for a few years now. What always held me back was the practicality problems. Is the Ragnar a legitimate tank you could use every day?

Personally, thanks to my work life, its easily possible to enjoy the Steam Crave Ragnar RDTA during the day.

For some, carrying this tank around would be far too much hard work and in the end, the performance wouldn’t outweigh the effort required.

The Ragnar is now in my regular daily rotation, yes its big, yes it can drain 18ml of e-liquid in no time and yes to enjoy this tank, you need a minimum of 120 watts. So its not the best for a crowded area.

The Ragnar is by no means a practical tank, but its a lot of fun, and a stellar vape at that.

Did you, or will you buy the Steam Crave Ragnar RDTA?

We’d love to hear your thoughts in the comments below! Steam Crave Pumper Preview – Turn Any Mod Into A Squonker! 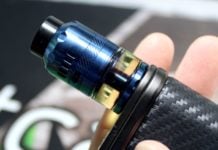