There have been plenty of small vape kits hit the market but the Sourin Air is the smallest I have personally seen (not including some cig-a-likes) by far. The Suorin Air: It Will Fit In Your Wallet but Does The Size Effect Performance?

However you say it I was surprised when I took this out of the box. It has to be said I also thought it might be a bit on the rubbish side. Lets find out after weeks of use how I got on with this e cig.


Save World Wide Shipping – Save 15% With Code AECIGCLICK

Did I mention this thing was small? Just in case you missed it the Suorin Air is tiny, the slimmest vape device I’ve tried. Not surprisingly it’s also feather light but with it has a decent solid feel that is nice in the hand. I personally thing the design is superb. The Suorin is simple. A micro USB port on the base and an on/off switch on the side making for a ‘pick up and vape’ device.

Mine was delivered in the off position so if you think it doesn’t work make sure it’s turned on.. Yep.. Speaking from experience here! The simple things hey..

The battery comes with a 400mAh capacity, which is surprising considering the overall size.

The tank is made from plastic and slots in the top of the battery. Not the smoothest of actions but once in the added magnet connectors keep it in place firmly. The coil is built into the tank itself so replacing the whole tank is needed when the time comes. Not a huge deal as the tanks are reasonably priced and the life of the tank, for me, was good. Suorin recommend changing after 5 refills but I’m into around 10+ refills and still good. 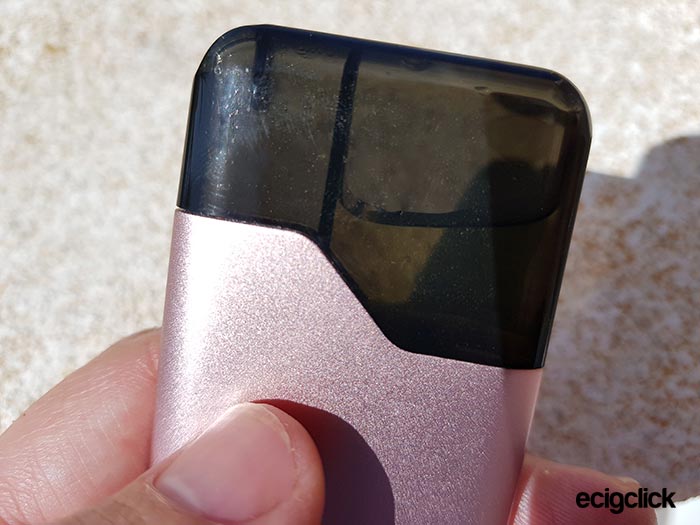 How To Fill The Suorin Air Pod

Filling is simple with the following steps:

How Does The Suorin Air Perform?

It goes without saying the Suorin Air isn’t built for clouds. It’s aimed at both new vapers or simply experienced vapers that want a true stealthy device.

Despite the size it’s very good indeed. For a mouth to lung device I personally found it to offer good flavour and vapour production. I’ll say again though don’t expect big clouds! It’s a little strange getting used to the corner positioning of the vapour outlet where you take a draw. I also found sometimes having to take a couple of primer puffs to get things going was needed as well.

This is an automatic device so no button pressing. Auto devices do, I find, sometimes need a little primer puff now and then. I have used this when out and about, especially when watching football in bars where I can get away with a cheeky stealth vape now and then using the trusty old inhale and hold method.

I’ve found myself throwing the Air in my shirt or jean pocket when I’m running out the house as a back up/alternative to the box mod I’m using at the time.

If you wanted it would easily slip into a wallet in place of a credit card. It’s that slim.

The battery life has been good for the size, not yet been caught short and from a full charge have managed most of a day moderately vaping.

Coil life is also good along with e-liquid consumption, it’s definitely NOT a thirsty tank. Although capacity is just 2ml it lasted me a couple of days before a refill was needed.

I used a 70VG/30PG e liquid, Bango by Froot. The Suorin handled this higher VG juice just fine. In fact, Suorin actually recommend this ratio as the optimal juice to use. They also recommend not going below 60VG/40PG as they say leaking may occur.

If your not too sure about the differences in these ratios check out our guide to PG and VG in e liquid.

The design is simple yet effective. It slips in and out of your pocket or even wallet easily. It’s super simple to use even for those new to vaping while providing pretty good performance all things considered.

Being picky, the tank removal and replacement could have been a little smoother. Not a big problem though.

I’ve got to say the Suorin Air e cig not only surprised me but has become a go to secondary device when I’m out and about.

If you are looking for a true stealth vape device then this should be one to keep an eye on.

Would I buy The Suorin Air if I lost or broke that device? In a heartbeat.