In for review today is the Suorin Drop 2 pod kit. 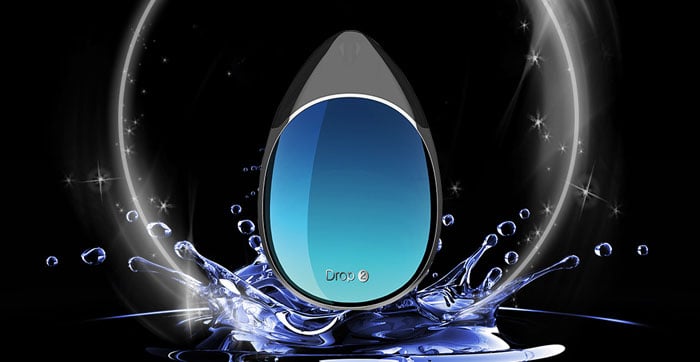 Suorin may not be a manufacturer you’ve heard of, but they’re certainly worth taking note of, specifically if you’re interested in small pod systems that perform well.

One thing I like about Suorin is that they take risks. Their packaging may not be the most fancy and the names of their devices may be a little obvious but their styling is unusual and certainly eye catching.

Known mainly for smaller systems with internal batteries, but have also produced a few single 18650 devices. They were making pod kits before they even became a “thing”!

The Suorin Ace has by far been my favourite pod system by Suorin. Kind of Uwell Koko styled with an excellent battery capacity and a wonderful flavourful vape. I was very impressed with the Ace. So let’s hope this water drip shaped Drop 2 Pod System performs up to my expectations.

What Can We Expect From the Drop 2 by Suorin?

A little comparison first. The original Drop had a 300mAh internal battery, came with a 2ml 1.3Ω pod and was 73mm x 49mm x 12mm in dimensions. So it’s fair to say everything has been put on steroids a little bit!

The device itself can also fire up to 14 watts, has a small on/off button on the side and also a 4-cell LED indicator.

There are 6 colour options to choose from: Sky Blue, The Scream, Black, Yellow Amber, Red Amber and Peacock Plume.

So let’s crack on with the review and see what the Suorin Drop 2 is all about. Let’s get the obvious out the way. Yes – it looks like a rain drop, especially in this Sky-Blue colour. Which is very unusual but certainly eye catching.

Generally speaking, the faded blue finish is super reflective and a hell of a finger print magnet. Suorin claim “The In-Mould Labelling (IML) protects the device from scratches and keeps the colours vibrant.” I have to say, although I haven’t thrown this around the floor, it’s certainly still looking vibrant and scratch free after a fair few days of use. 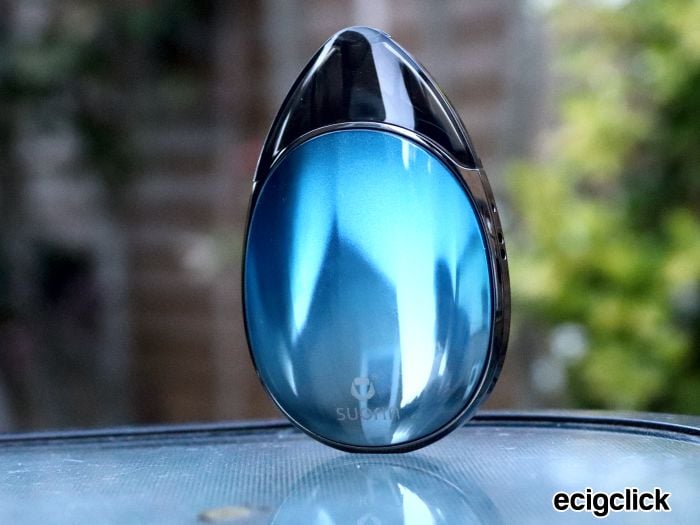 Circling the main body of the Suorin Drop 2 is a polished chrome finish where you find a number of small airflow holes, a lanyard position along with 4 small LED indicators and an on/off button. Also at the base of the device is the USB-C port for charging and the Drop 2 can charge at a maximum of 1A from my testing.

When it comes to construction, the Drop 2 feels solidly built with no creaks when gripping and no wobble from internal parts. The frame is made from Zinc-Alloy and it feels like the 2 rounded panels are plastic to me. 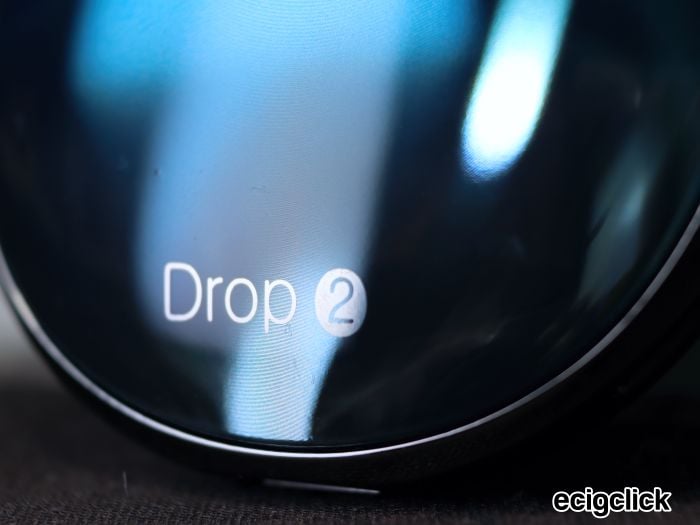 The Suorin Drop 2 Kit comes with just one pod, but it’s a 1.0Ω mesh coil which is non-replaceable within the pod.

It can hold 3.7ml of e-liquid in the Non-TPD version.

The pod itself is of PCTG construction and it’s a little on the tinted side, but not too dark so you can quite easily see your e-liquid level. At the base of the pod are a number of contacts and magnets along with a tiny square bung which has to be lifted up to fill the pod with e-liquid, it’s a little on the small side but fits nice and tightly into the pod.

The pod is connected to the device via magnets and clicks nicely into the device. Removing the pod is another story as the curved to a point mouthpiece shape means it can be a little slippy to grip and remove.

Suorin Drop 2 In the Hand

The Drop 2 is so small and oddly shaped that it can be held however you see fit. I tend to hold it in the same way I would hold a business card before I pass it to a customer, with all my fingers on the underside and my thumb on top. With no firing button to worry about, there is no ‘correct way’ to hold this device. The auto-fire function is all you have and it works responsively and trustworthy.

The Drop 2 feels solid in the hand and very well made, maybe a little on the slippy side thanks to the glossy panels and polished frame. There is a nice weight to it thanks to the 1000mAh battery which really makes this feel fairly substantial for such a small system.

The finger print-ness of this device kind of bugs me though. Looking beautiful out of the box but after a minute, it’s blemished and I’m constantly having to wipe this device over. How To Fill the Suorin Drop 2 Pod. 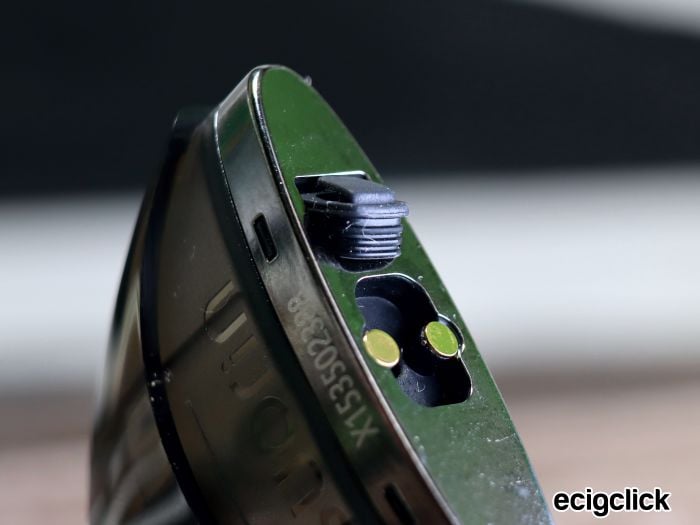 The Suorin Drop 2 has very little to worry about when it comes to functions. The small button on the side of the device will allow you to turn it on and off with 5 clicks and you get a nice little dance from the 4 LED indicators when you do so.

The power button does not act as a fire button so this is purely an Auto-Draw system. When charging the LED indicators will glow white and when fully charged all 4 LED’s will glow solid white.

How Does the Suorin Drop 2 Perform?

For the Suorin Drop 2 system, I went with a 20mg Nic Salt by IVG called Vanilla Biscuit. And it’s pretty much what it says on the tin. It’s also a 50VG 50PG mix.

The device offers up to 14 watts worth of power, but with no option to adjust this, you’re stuck with whatever the device feels is best for the 1.0Ω coil. 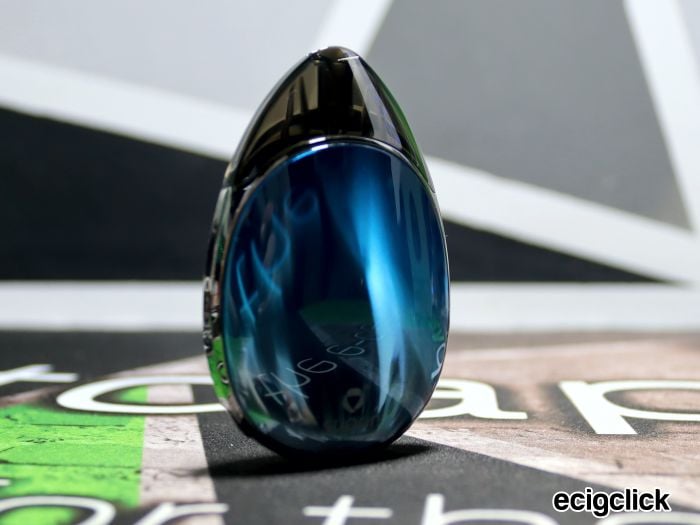 How this device is set up, the vape is slightly warm and fairly intense.

I’d say the power output is about what I like from this style of system and the flavour is very good.

It reminds me in ways of the Suorin Ace pod system for flavour, very competitive with most simple pod systems on the market.

With the Suorin Drop 2 not having an airflow adjustment method, you’re pretty much stuck with how it is, unless you decide to block up some of the airflow holes with sellotape or something.

But how it comes standard is just fine, the airflow is quiet and smooth and the draw is fairly tight. I suppose it’s similar to the majority of disposable devices we see on the market, if not a little tighter which for me, is better.

The 1000mAh internal battery offers excellent battery life. I’ve easily managed 2 days without having to pop this on charge and the 1A charge means it’ll charge within an hour.

My timer finished at 57 minutes however that could have been a few minutes less as when I was charging, I had to deal with the kids and forgot to keep an eye on it after minute 49. Oops.

Does the Suorin Drop 2 Leak?

Considering this is a bottom-filling system, I’ve been very impressed with the lack of leakage from this pod.

Sure if you don’t pop the rubber bung in tightly enough or you decide to blow into the pod, you may notice a build-up of condensation after a while. But generally speaking, this is a leak free system

The Suorin Drop 2 device is so small and simple it’s a little bit tricky to know what to say about it.

It’s small, simple and cute but performs like one of the best pod systems in this category and although the style won’t suit everyone, I’m sure there are some folks out there that would adore this unique water drop-shaped device. Although I have concerns over the pod availability in the UK, I have no concerns over the device itself. The massive 1000mAh battery is plenty to last you a long time and even considering the deterioration of batteries, even a year down the line I imagine this will still hold at least a days worth of life.

The lack of airflow adjustment may be a flaw to some, but personally I have had no issue with how the airflow is as standard. The coil performs excellently and offers very good flavour and a nice cloud to boot.

Is this device versatile to suit a new vaper and an experienced one alike?

I’d be very confident in recommending this device to a new vaper, especially due to its simplicity and just not looking like your regular pod system. Its unusual style makes it look more like a modern car key fob or a paperweight rather than an e-cigarette. An experienced vaper may not be too interested in picking this up, unless they’re a bit fan of the style. But nonetheless, if they’re looking for a simple pod system for walking the dog or for a discreet vape, the Suorin Drop 2 would be well worth considering.

Have you bought the Suorin Drop 2 kit?

Let me know your thoughts in the comments below