Ecigclick
Home Pod Mods Upends Uppen Review – Can You Guess What It Is Yet?

The Upends Uppen review, and the design of this ‘vape pen’ has certainly caused a bit of a stir.

Founded in Shenzen, China in 2019 Upends was formed from a team with over ten years experience, and their vision is to combine elegance and utility. And to become the most admired electronic cigarette brand among vapers. 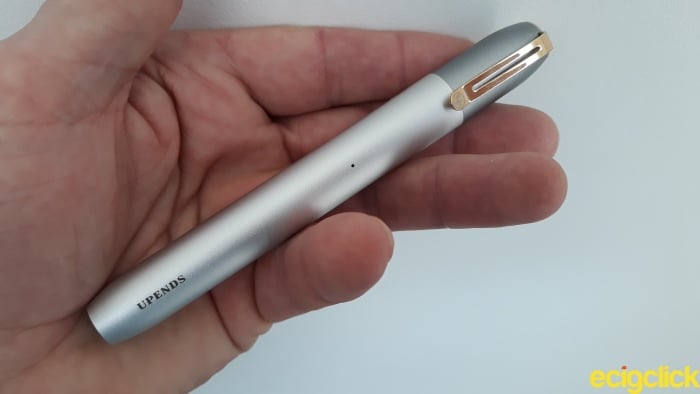 With knowledge in both production and processing, Upends have their own mantra.

To banish the stale and bring forth the fresh

If by stale they mean the tidal wave of pod devices flooding the market, fair point.

As for fresh? This review will be answering that one.

These kinds of quotes are inevitable from any new manufacturer. When all’s said and done it is literally another pen style device, folks.

Have Upends done enough to upend me? Only one way to find out!

What Can We Expect From the Upends Uppen?

Upends is a very new vape manufacturer. I must admit to having zero knowledge of them.

By sharing a similar name to their first creation they’ve created a clever marketing trick and should if anything become memorable one hopes.

So what we can expect from the Upends Uppen is a device that caters entirely to the new vaper.

Personally, in this day and age it’s very pleasing to see. Lest we forget we all started somewhere, and for many, pen style devices offer the most effective way of quitting the dreaded death sticks.

The Upends Uppen is a very low powered device meaning the battery should hold out for at least a full days use. It’s auto draw activated so no fire button.

With fixed airflow and wattage output, what you see is what you get. Things don’t get any simpler than this.

In fact they also don’t get any more portable than this – just don’t mistake it for your favourite Parker Knoll!

The elegance and style of Upends is visibly represented with the packaging. Featuring a slim, rectangular hinged case I almost expect to be presented with a piece of jewellery! Gone is the fold out road map instruction sheet and replaced with a glossy pamphlet. Although far too posh for me, it backs up the manufacturers intent.

I found the warranty card included as the back pages to the user guide. The Upends Uppen is only available as a TPD compliant product at the time of writing, issued in either black or silver colour schemes. Let’s work from the cap down.

The cap is made of plastic so while strong can still be flexed. The top and clip are comprised of 18K gold, another example of the promised elegance.

Despite the gold clip, the darkened grey of the cap looks oddly out of place when attached to the lighter coloured battery.

Connecting the top cap to the battery is achieved with one simple snap. It’s very much the same way most traditional pen lids work, and there’s very little chance of losing it when in place.

This is the disposable variety and the exterior is made entirely of plastic.

Upends liken the fixed mouthpiece to that of a clarinet. I could think of other things – feel free to message me for those! It’s not the most comfortable of mouthpieces and clearly designed with focus on a mouth to lung draw – nothing more.

A typically narrow MTL chimney is visible through the perfectly clear viewing window. There’s an easy to use silicone stopper positioned on the side of the pod.

Lifting it reveals a 6mm oval fill port best designed for smaller bottle nozzles, it’s ideal for those requiring a quick top up.

How to Fill the Upends Uppen Pod

Leave the device for five minutes, as this will allow e liquid to fully saturate into the cotton preventing the possibility of a dry hit. Supremely lightweight being made of an aluminium alloy. The very underside houses the USB port so upright charging is obviously a no – no. A pin hole LED on the side flashes white when the pod is connected. Down inside the battery the small magnet and battery contacts are visible. The battery features a nifty auto focus mechanic, and When slipping the pod inside, the magnets automatically align the correct position.

The device vibrates for a second and a single flash of the white LED confirms this.

Since removal of the pod is the only way to check current e liquid levels this is welcome feature.

During the charge cycle the LED will remain red, turning white during the last minute of charging. The Upend Uppen does allow you to vape during this time.

The charge percentages are represented as:

The Upends Uppen comes with a number of safety features.

How Does the Upends Uppen Perform? This is a 1.2ohm mesh coil designed by Upends to evenly distribute flavour.

The dual fixed airflow slots at the top of the battery offer a somewhat airy MTL vape. I expected much more restriction so this was something of a disappointment.

Practically every pull resulted in far too much vapour escaping, leaving very little cloud production. It’s not an isolated case of course, but tends to have an effect on flavour quality as well as overall enjoyment.

I also found the vape experience rather dry and a little flat. All the refreshing zing of the sherbet was sorely absent and flavour properties were average at best.

Somewhere in the background of the exhale I was still able to pick up elements of the strawberry, blueberry and raspberry. Yet in all three fruits there was a lack of sweetness to bring the profile to life.

The battery performance is very good. I got an impressive nine hours before the LED changed to red, after which I was able to eek out another hour before the device vibrated mid vape lol!

It took around an hour to fully recharge, zero to hero as they say. I didn’t notice any loss in performance during use so it’s safe to say the device holds a steady 10W power output.

I have to admit the Upends Uppen has stumped me!

I just couldn’t pinpoint where the airflow was coming from.

The fixed dual airflow slots at the top of the battery section could not be blocked off, and neither could those under the coil at the base of the pod.

There was always sufficient airflow circulating.

Consequently I’m stuck between a rock and a hard place because the mouth to lung experience is too loose. Attempting a restrictive lung vape is far too uncomfortable and reduces what average flavour there already is.

Personally this device offers less than a standard CE4 clearomizer of yesteryear because those devices guaranteed a true mouth to lung vape.

They were also capable of better flavour and cloud production. It’s a step back unfortunately and mere aesthetic changes simply aren’t enough.

Who would I recommend the Upends Uppen To?

When all’s said and done the Uppen can still cut it for a new vaper with no experience. Use salt or high strength freebase nicotine and it’s likely to be very effective.

Filling is made very easy, positioning the pod is fool proof and the battery holds up very well, three vital components in the battle to beat the cancer sticks.

In this respect, the Upends Uppen wins its own little battle – it’s just not going to win any wars.