Has Vandy Vape Managed To Surpass the Hugely Successful Original Kylin RTA With The New V2?

The original was a massive success – eventually lol – so has the follow up the Vandy Vape Kylin RTA V2 surpassed its little brother?

I said eventually as those of you affected will remember the original Kylin RTA had severe deck leaking issues which thankfully the company quickly sorted out.

BTW if you’re ordering this new version make sure you’re not getting the updated version 1 which some stores are calling the Version 2.  To keep it simple the new version II has a funky resin drip tip and is 5ml not 6ml max capacity – they could have called it version 3 to stop the confusion lol 😉

OK now that’s out of the way let’s take a closer look at what has been one of the most anticipated vape releases of the year.

I was fortunate to have reviewed the original Kylin RTA [without the leaking issues] and absolutely loved it. Vandy Vape has a pretty good track record of producing some decent vaping gear – indeed you guys voted them Best Vape Brand in our Vape Awards last year.

We’ve reviewed a ton of Vandy Vape products with most recently the Pulse X squonker and the impressive Berserker Mini MTL RTA receiving good reviews from Laura-ann and Michelle.

OK enough of me rabbiting on let’s see how this one vapes.

The Vandy Vape Kylin V2 was sent to me free of charge and as always that in no way affects my opinion. Not sure if mine is the final retail packaging so I’ll just say it’s a box and does the job well enough lol and inside you’ll find: The latest version of the hugely popular Kylin RTA can be used in either single or dual coil and is a top fill design.

The bubble glass gives you 5mls capacity whilst the straight glass just 3ml – despite looking I can’t seem to find any reference to a 2ml EU version however I expect if buying in say the UK that’s what you’ll receive. Let me know in comments if I’m wrong lol. The designers have certainly redesigned the inside however externally it does look like its predecessor.

The deck is the obvious change here and whilst still postless the airflow has had a major overhaul and is honeycombed under the coils. They’ve done away with the need for the extension piece on the originals chimney at the expense of 1ml of e-liquid but giving the chamber a much cleaner look – and obviously shorter. The juice ports look a little thinner too but that in no way affects the wicking as we’ll soon see.

It’s rare you’ll find a bad build from Vandy Vape – apart of course from the first releases of the original Kylin – leak city!

As to if I’ve had any leakage from the Kylin V2 I’ll get to in a wee while – what I can say is the build is very good indeed. The threads whilst not silky smooth are perfectly acceptable and all the moving parts come apart easily for deep cleaning.

One issue on the build I do have is the O rings holding either of the tanks. Even when screwing down tight on mine the glass still spins even changing the O rings hasn’t stopped that annoying issue.

I’ve had no leaks as the seal is good – but it’s certainly triggered my OCD and made me wary when out and about.

Design wise it looks as good if not better than the original – maybe the shorter chimney and shaving 1ml of capacity has given it a better profile.

I did mention in my review of the original the knurling annoyed me being a little over the top…not sure if I’ve mellowed or maybe it’s the different colour but it hasn’t been an issue.

The Kylin logo, whilst etched and not engraved, is low key enough [on my gun metal anyway] to not overly intrude either.

How Does the Vandy Vape Kylin V2 Perform?

The million dollar question and the reason you’re here.

OK building on this is an absolute doddle – either use the Coily style tool included OR preferably and keeping the British end up use the REAL Coily tool – both suggest 5mm which I found was perfect.

There’s plenty of room in there to get your coils how you want them – I found close to the side airflow with a nice little gap between them was the way to go…but hey you’ll find your sweet spot. In my first build I used the coils that come with the Vandy Vape Kylin V2 RTA and wicked using my go to FUZZ vape cotton. BTW the wicking could be classed as a little tricky, it felt a little tighter in the wicking ports compared to the original. To that end I suggest cutting to just slightly above the base – thinning out well to allow the cotton to swell once juiced up.

I’m not the world’s greatest wicker by a long shot but nailed it first time and have had plenty of bubbles and certainly no flooding or dry hits.

Another case of more is definitely less.

Not sure what the heck was going on but I fiddled and faffed about with lining them up and down and sideways but could I get any flavour apart from a nasty kind of burning? Nope and they ended up in the bin!

This time I used a pair of my current go to Wotofo Quad Core Fused Claptons which ohmed out at 0.14ohms and I’ve been vaping at an easy 73w which for me delivers a warm cloudy tasty vape.

The difference in the vape was astonishing to say the least…however…Even after running a couple of tank fills of my go to e-liquid the flavour whilst obviously better than the first build was good – bordering on great but not amazing. 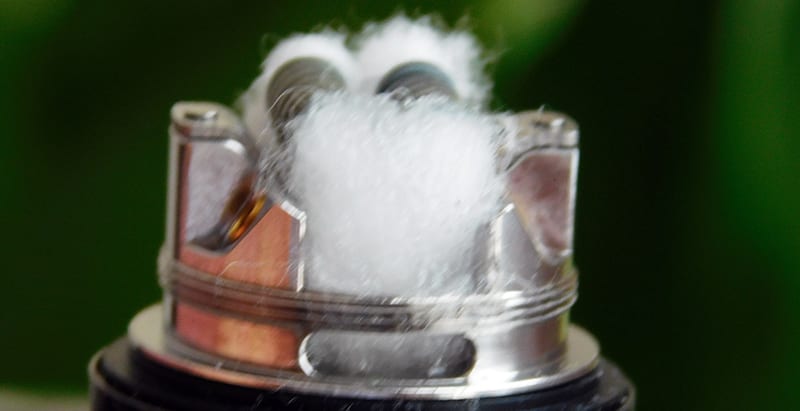 Don’t get me wrong IMHO this is a superb tank chucking clouds for bloody days but the flavour is a tad less than I had hoped for – BUT definitely better than the original so well worth the upgrade.

In the interests of fairness whilst I’ve had this 3 weeks and used it every single day – I did get man-flu followed by an ear and throat infection which is clearing up – so maybe just maybe my taste buds were affected this last 8 days or so – but I doubt the whole 3 weeks I’ve tested it…who knows.

Airflow On The Kylin V2

Just a quick mention of the airflow – it’s once again bottom fed and Vandy Vape is calling this bevelled with a cambered deck…ooo fancy lol.

Experience tells me the honeycomb will give a smoother – quieter and less turbulent vape and this is certainly the case. Whilst not silent it is quiet and a very smooth vape indeed.

It’s airy too with wide open being just about OK for me and I do like an airy vape. However I have found closing it down just a touch is preferable for my style of vaping.

The Vandy Vape Kylin V2 has been a highly anticipated release to say the least and one I’ve been looking forward to given I really enjoyed the original.

So has it ticked all the vaping pro boxes for me?

Yes pretty much, however, I will maybe more positive about the flavour once I shift this damn man-flu lol.

However I have to stress I used this 2 weeks prior to getting it and still felt the taste whilst bordering on greatness was just not quite reaching those giddy heights. And at the time my RDAs all tasted fine so make of that what you will!

Other reviewers out there suggest this is the RTA release of the year…I’ll keep my powder dry on that claim for now…but still a great RTA and one I’d definitely recommend as both an upgrade for users of the original and newcomers to the Kylin RTA.