The Vapefly Alberich MTL RTA is the latest addition to the large range of gear this relatively new company produces.

Since the brand started in 2017 they have provided us with some lovely vape stuff including the Galaxies MTL Kit, Brunhilde SBS Kit, Optima Pod Mod and Siegfried Kit.

What To Expect From The Vapefly Alberich MTL RTA?

The brand have a reputation of giving us some great MTL tanks such as the original Galaxies MTL RTA which had a lot of fans.

The Alberich is another rebuildable which caters for Mouth To Lung (MTL) vapers. This vape style requires a tighter and more precise airflow system and is usually designed for higher PG e-liquids.

If these terms are making you scratch your head read our guides to MTL / DTL Vape Styles and VG Vs PG In E-liquid.

Oh and the name “Alberich” is apparently a German fictional character whose name means “ruler of supernatural beings (Elves)”.

Anyway down to business! The Alberich has a single coil deck which has 4 clamp screws so you can add coils wound in either direction.

Seeing as the kit includes a 0.8ohm Kanthal coil and the Firebolt cotton strips you should be up and running quite quickly.

The bottom airflow inlet is fixed but you adjust the airflow by changing the internal Airflow pin.

There are 6 airflow pins included in the kit and the airflow hole size ranges from 0.8mm up to 2.5mm. The smaller the hole the more restricted the airflow. You install the airflow pin into the 510 connection.

The air enters at the bottom airflow inlet and travels straight up to the bottom of the coil.

Capacity wise there are a few options but I have not seen any mention of a 2ml TPD compliant version as yet – so fingers crossed there will be one for us UK vapers!

Included in the kit are the 3ml and 4ml PEI amber tubes, but you can purchase clear glass versions separately.

Filling is via the top fill screw off cap to reveal the fill ports which have a gasket to help prevent leaks if the tank is upside down.

Here is an introduction video from the Vapefly website.

There are 3 colours to choose from: Stainless Steel, Black or Gunmetal. If this RTA is as good as previous Vapefly MTL offerings this will be a beauty!

Let us know what you think of the Vapefly Alberich MTL RTA in the comments below! 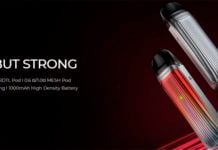