The Vaptio AirGo Kit is a funky new addition to the company’s vast range of vape devices. 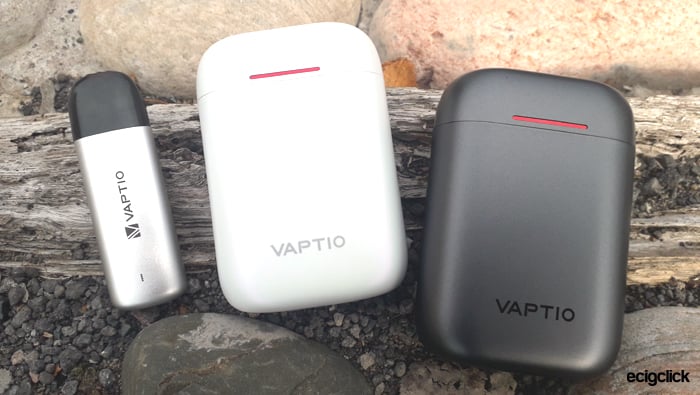 What To Expect From Vaptio AirGo Kit…

There are 3 main components to be found in the kit. The mod has an internal 80mAh battery which seems way too small but remember this is recharged on the go from the box it is stored in, and Vaptio says the maximum output is 11W.

You connect the mod to the removable pod. The pod is refillable via the side fill port with up to 1.5ml of your own e-liquid plus you can carry an extra pod in the box.

Inside the pod is a 1ohm coil which is not replaceable – when the coil fails you discard the pod and replace with a new one.

The box is designed to fit in the pocket and provide somewhere safe to store the pod and mod plus with an internal 700mAh battery the box also charges up the mod in around 5 minutes when it is installed into the box.

Apparently the box will charge the mod up to 7 times on a full battery charge.

You recharge the box only via the USB Type C port on the base.

On the front of the box are two sets of LED indicators, the top round indicator displays when the mod is installed in the box and changes colour according to the charge remaining in the pod.

Below that are 3 LED lights which indicate the charge remaining in the actual box.

There are 3 colours to choose from: White, Grey and Aurora Blue.

As usual I will report back honestly on my findings of the kit I have in my hand. I received the Vaptio AirGo Kit in both the white and grey colour.

The packaging was really stylish I have to say and added to the glamour of the kit.

You can see straight away how this kit is designed to look like the funky wireless earphone pod sets from companies such as Apple and Samsung.

The instruction manual is more of a leaflet and only 3 pages per language, but to be fair it was pretty simple to use and covered everything you needed to get set up.

This is so tiny! On the front of the mod is the Vaptio logo and below that is a set of tiny LED lights in a line which illuminate when vaping.

I have been trying to watch them (they only stay on briefly when you inhale) and these do not appear to change at all according to battery power remaining. The base of the mod houses the charging connection – 3 small contacts which mate up with the pointy springy posts in the box for charging.

Inside the pod port are the electrical contacts for the pod connection.

The pod is held in magnetically and fits well, it is not difficult to pull out but equally seems to be held in place robustly and no wobble from the pod.

This is a fixed coil design so the only thing you have to do is fill the pod and install it in the mod.

The base of the pod has 2 large contacts which connect with the mod contacts and the pod can be installed either way around.

It has a nice feeling to the mouthpiece and is clear enough to see your e-liquid level when held up to the light.

A side fill port is provided – the cover plug is a bit small and fiddly as you will need finger nails to prise the port cover up to access the port.

I did notice some leaks – mainly when left in the charging box. Not from the base of the pod as you would expect but from the mouthpiece – see the photo below…

Vaptio also kindly sent me a pack of 3 spare pods. This is the real stunning part of the kit for me. The box is very stylish in the white and grey colours.

Lifting the lid you are greeted with a lovely shiny platform which surrounds the areas where the pod and mod are inserted. The lid has a strong catch and is held closed magnetically.

If the lid is almost closed the magnet will snap it shut for you.

On the front of the box are the indicator lights and the “Vaptio” text. On the white version the box indicator LEDs are quite pale in daylight – but you can still just about see them.

The photo below was indoors – I did try to take a photo outside in the sun but you couldn’t see the lights at all. The USB Type C port is located on the base of the pod and this worked fine with no issues at all. With the pod and mod inserted there is a slight rattle when you shake the box.

The kit arrives with the mod and pods installed in the box.

One pod is attached to the mod – but you will need to remove the pod for filling before use.

Also on the base of the pod is an isolation sticker to prevent you accidentally firing the device before filling which is great and will prevent you killing one of your new pods hopefully.

This is pretty simple stuff really.

The mod is operated by inhaling on the mouthpiece and it should fire automatically.

The indicator on the pod only lights up when firing or when the battery is flat.

You will need to pop the mod into the charging box to see what colour the mod LED indicator is for any other indication of battery capacity.

The box has 3 LED indicators on the front (you won’t see them unless they light up!) to display the battery capacity remaining in the box

When the mod battery needs charging the lights on the mod will flash and the device will not fire – so this is the time to install it in the box for charging.

The instruction leaflet says the device has the following protections…

I have not seen any mention of how this does indicate a fault or experienced any other fault conditions.

How To Charge The Vaptio Airgo Box Battery I charged mine using a 2A (Max) charging adaptor (I have no idea what the charge rate of the kit is) – it took 2 hours (give or take a couple of minutes) to fully charge.

How To Charge the Vaptio Airgo Mod Battery

The mod is charged by inserting it into the box, the coloured LED will light up when charging.

It will pulse red for a while then will turn green when charged. If the LED does not illuminate press the mod into the box slightly and it should kick in.

How To Remove the Vaptio AirGo Pod

The pod simply pulls out of the mod body, and a magnetic connection holds the pod in place.

A new pod can be pushed into the mod either way around.

How To Fill The AirGo Pod

How Does the Vaptio AirGo Kit Perform?

As this is a MTL (Mouth to Lung) kit – I used a higher nicotine strength e-liquid. I used my usual CrazySaltzzz Bubblegum – which has 20mg Nicotine strength salts and 50/50 PG/VG.

I really feel like I am doing this kit a slight disservice.

To explain – I am also reviewing another pod kit from a different company – and the flavour on that has blown me away. So in comparison the little Vaptio AirGo setup doesn’t hit the spot to be honest.

The draw activation is quick to fire and the MTL airflow to me seems spot on. This has quite a tight airflow which is why I think the firing speed is so accurate.

Flavour wise this is decent, I can taste the flavour but it is not buzzing like other pod devices I love.

Again the throat hit is good too – I did try to do a huge inhale to test the firing cut off time and after 6 seconds I ended up coughing so there is a hit there.

This does perform – not by any means badly – but is slightly below par to other pod kits I am using with the same e-liquid.

I have to say this is super economical on e-liquid – I kept checking at the points I thought this would need refilling and it was still almost full!

So far I have only filled this twice and got through about 8 mod charges!

One thing I did find with repeated vapes and just after charging the mod can get pretty warm.

The box operation has been solid, you flip the lid up and the LED indicators come on to tell you at a glance the status of the box and mod battery.

Again the indicator lights – especially on the white version are pale. Indoors you can see them – but outdoors in the sun you will struggle. However you can just apply shade with your hand and the lights are visible.

The box is pretty robust and I have knocked it over several times, the lid catch is still strong and holds the box shut well.

There are two battery life aspects to consider here – the mod and the box.

On average the pod lasted me 20-30 puffs and on some occasions I could wind the battery down in 15-20 mins. However the mod battery was always charged up from the box within 10 minutes so not long to wait.

I will add I am a heavy vaper – so this may be suitable for those who only have a few bursts of vaping every few hours.

Also bear in mind I have quite long inhales when vaping (only a year off the ciggies so I hammer my vapes) so if you inhale for less time your puff count might be higher.

The box battery gave me 10 pod charges. I did do the first pod charge when the box was on charge and I didn’t count this in my total. The final charge the box indicator was flashing and the mod indicator didn’t light up for long.

All in all a decent performer.

This is a super cute kit and looks very futuristic. Everyone I have shown it to expected it to be the air pod earphones, and were pretty surprised that it was a vape kit.

Performance wise, this isn’t up there with the best, but neither could it be described as awful.

The flavour and throat hit are a bit muted but when you see the size of the mod itself it’s not a surprise really. That tiny battery isn’t going to kick out high power for long.

I found myself using this only at home, where I could sit and wait for the mod to charge as it does catch you out a lot.

A lack of battery capacity indicator on the mod is annoying, you can be vaping away and suddenly the little LEDs on the mod flash and that’s it. No warning. I would find this annoying if I was driving or trying to get a quick sneaky vape in in a short time.

Also this kit is pretty expensive, not to say the quality is lacking at all – it is super well made – but there are way better performing kits for much less cost in my opinion.