The VooPoo VMate is an interesting little dual 200w battery box mod that is built light for a comfortable feel in the hand. VooPoo was established in 2014, since 2017 with the acquisition of US brand WoodyVapes they have bought us some really interesting gear, Drag, Too, Alpha One, also smaller devices ideal for the beginner like the Panda for those making the switch!

Of course VooPoo are best known for their Gene Chip, one of the most accurate chipsets on the market with the exception of DNA!

What Can We Expect From the Voopoo VMate 200 Mod?

The VMate is available in two options, as a kit with the UForce T1 tank or as the baseline version which I have (It’s just the mod).

The Voopoo VMate includes the updated but cut down in size 32 digit Gene Fan Chip! How does the mod function? And what do we think of it? Can the VMate be a redeemer for VooPoo? Can it earn a spot on our best vape mod list?

Let’s find out with an up and close personal look……

This device was sent to us for the purpose of this review. As always my views are my own. The full Kit comes with the following addition:

The Voopoo VMate comes presented in a card box; mine is the baseline version which also includes a micro USB cable and user manual. 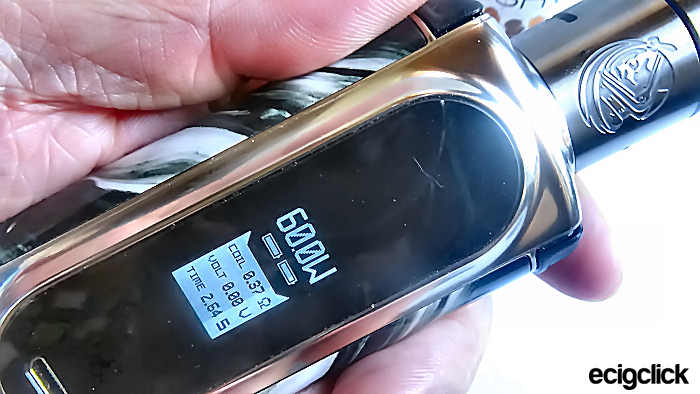 I would say for a small compact light mod the design is good although initial thoughts are that it has a slightly cheap feel to it! However the mod fits the hand well making it very comfortable to hold and use.

The VMate measures 89mm tall and 47mm wide with a tank diameter of nearly 25mm even though the total width of the top measures 30mm.

The main structure of the mod is made of zinc alloy mine is a silver colour, without any cells installed the mod weighs a paltry 100g. The VMate comes with 2 plastic battery covers, various designs are available; mine are called S-Waterfall Black. Both doors are removable using (a well hidden) nail slot on the reverse of the mod near towards the top.

When I first opened the box and examined the VMate I couldn’t figure out how to put the batteries in to the device lol, there is no indication in the manual how to accomplish this.

Only by a detailed examination was I able to spot the nail slots. The doors are held by magnets at the top and a tab that fits into the bottom of battery case, there is no movement the doors once connected. The doors have L and R inside. The battery orientation is not very clear (left + up, Right – down) The back of the device has a black plastic perspex plate with VOOPOO branding. The front has rather a small OLED screen that I measured to be around 21mm by 13mm, under the screen you have a USB charge/update port. The bottom of the mod has all the normal information such as Gene Chip etc. The top of the mod has a stainless steel 510 connection point with a spring loaded gold plated pin the threads are well turned, you also have 510 air feed for those who wish to use tanks with 510 airflow. The fire button is to the right at the top of the device and the adjustment buttons on the opposite side! All the action buttons are made of plastic. The fire button feels natural in this position.

It did, however, take me a while to get used to the adjustment buttons being where they are.

A Basic Guide To Getting Started

No real knowledge is needed to set the device up!

The device has 8 types of protection which are The Voopoo VMate will fire down to 0.05Ω in both power and temperature control and utilizes common wire types.

How Does The Voopoo VMate Perform?

For this review I have paired the VMate 200 with my CSMT RDA that has a 0.37Ω single 24g flat Stainless Steel coil in it, using Vaporfi Catch Ya Latte liquid. This is a very light mod even with the batteries and RDA installed! VooPoo say the device is 30% lighter compared to similar devices. VooPoo also go on to say that the VMate 200 is built with a compact design saving 10% on overall space! With a Mouth to Lung style of vape at 30w with the airflow closed to 1 coil, I found that while acceptable the vape for me was on the cool side, the vapour production was good as was the flavour. I have since tried dual coils (0.1Ω) in the CSMT RDA the result at 80/90/100W of power with dual AF open fully was a very cloudy warm tasty vape. As I said earlier the fire button feels to be in a natural place for firing, I use my index finger to fire the device which works for me!

The adjustment buttons took me a while to get comfortable with their position! I guess I am so used to them being on the front or side of whatever device I use lol.

While all the action buttons are all made of plastic they do give a nice resounding click as you press them. While the screen is of a rather small size it is bright and readable indoors or in the shade, as with many mods I had difficulty reading outdoors in bright sunlight.

The screen also has a plastic screen protector over it, after a while of use this protector starts to curl at the edges; at least mine did lol. You can of course just remove this. I didn’t experience any errors with the temperature control function with SS316.

At 400f and 60w with a 0.37Ω SS316 coil the result was some light yellow banding to start, repeating the process with fresh cotton and a constant press of the fire button for 3 seconds resulted in the cotton burning through “no flames”. Changing my cotton and with the settings as above, I dampened the cotton and vaped until the cotton was almost dry, the result was heavy darkening of the cotton where the coil sat. While chain vaping is not the norm I like to simulate rapid vaping to see how the mod will hold up. I do this with a single coil at 60w with an RDA for 8 toots, the top of the VMate 200 did get a little warm due to heat transfer the mod held up fine with no apparent errors. I used the device for 4hrs at 60w in TC with my SS coil before I had to change the batteries.

Overall the VMate from VooPoo, is a decent little 200w fella, more suited to those who wish to update their mod to something that has comfort and reliability in place of the standard square weighty box mod! I don’t have any serious complaints about the device it has worked well for me in the time I’ve been testing it.

Would I buy the Voopoo VMate due to loss or damage? – I’d consider it!