The Dovpo Blotto Max RTA is the latest addition to the range of Blotto atomisers!

The Blotto range are co-designed with the vape reviewer The Vaping Bogan and so far there have been the Original Blotto RTA, Blotto Mini RTA and Blotto Single Coil RTA.

What To Expect From The Dovpo Blotto Max RTA?

Basically this is a super-sized version of the original Blotto with a few added tweaks and improvements.

This is part of a joint new release with the Blotto V1.5 RTA which I will cover in another preview.

So the main difference is the physical size which also impacts the amount of space on the deck.

The tank diameter is 28mm and the deck is designed for dual wire coils – and Bogan suggests 3mm coils should be ideal.

An improvement to the deck is shown below – the original had PEEK insulators to the rear of the airflow posts, however now to increase strength these posts are all metal.

On the centre of the deck is the slotted airflow outlet to feed the air under the coils but the airflow posts with the honeycomb outlets supply the air all around the coils too to increase flavour.

The base and airflow adjustment ring have been strengthened I am not sure if there was an issue with the original?

In the standard version you get a 3.8ml straight glass and two 6.2ml bubble glasses (glass and PCTG amber). There is mention of a 2ml TPD version but I am not sure if you get a spare glass in this kit.

Another recognisable feature is the Blotto bottle opener tool which also doubles as a coil cutting guide.

As the Blotto Max and Blotto V1.5 are being released together here is a “Show and Tell” video from the co-creator Vaping Bogan YouTube channel.

There are 3 colours to choose from – Black, Gunmetal and Stainless Steel.

So this is basically a beefed up Blotto! I also like the fact that the creators have listened to feedback from customers and made some improvements!

What do you think of the Dovpo Blotto Max RTA? Let me know in the comments section below! 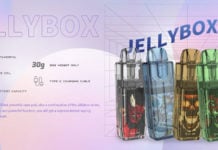