Ecigclick
Home RBA's RTA Reviews Dovpo Blotto Mini RTA Review – If You Only Want To Get...

Let’s take a look at the new Dovpo Blotto Mini RTA and see if smaller means a bigger performance.

It seems like it was only yesterday that Sam Parsons aka The Vaping Bogan, designed the Blotto RTA with Dovpo. Gaz seemed pretty keen on it, you can see his full Blotto RTA review!

The Vaping Bogan has created a few vape products over the years, with the Bonza RDA getting a sterling review from Neil.

What Can We Expect From The Dovpo Blotto Mini RTA?

Dovpo have been hitting it out the park recently with some really well received tanks and mods, so I’m pleased to see another collaboration between them and The Vaping Bogan.

The original Blotto was a big hit with it’s unique bottle-cap looks, and an airflow that almost totally surrounds your coils. The Blotto RTA Mini keeps all of these things, but shrinks it down slightly. It’s dropped in height by a centimetre, and is a couple of mm smaller in diameter.

So this might be the perfect RTA for people that wanted an original Blotto, but didn’t have a big enough mod for it to look right on.

One slight downside of the shrink is also a drop in e-liquid capacity, whereas it maintains a 2ml capacity with the straight glass. The bubble glass now only doubles that capacity to 4ml, rather than tripling it to 6ml.

This was sent over free of charge from Dovpo, thank you – but as usual all my thoughts are my own, and I will report back honestly with what I find. The Blotto RTA Mini comes in 5 colours, 2 more than the original Blotto did at launch: Gunmetal, Black, Steel (which I was sent), and a new Blue and Rainbow.

If you have seen the original Blotto, you’ll be hard pressed to spot the differences, at least in pictures! It’s only 1cm shorter, and just over 2mm less in diameter.

Changes from the Original Blotto

Aside from a slight shrinkage, there’s remarkably little that has changed between the original Blotto and the Dovpo Blotto Mini RTA.

One criticism of the Blotto, is that the glass was very delicately placed on the o-ring for the top cap.

This meant if you wanted to unscrew the base with liquid in it, you had to be very careful not to dump a load of e-liquid.

Happily Dovpo has responded to this criticism, and whilst it is still only held in place by a single o-ring, it now has a very secure fit. In fact when I went to change the glass, it took a little bit of brute force and ignorance to separate the glass from the top cap!

It has a metal base, and then a frosted plastic top section. I’m not the biggest fan of low profile drip tips, but this definitely looks the part.

The top cap has the same bottle cap look as it’s bigger brother, and once agin this provides ample grip for you to remove it.

A quarter turn is all you need to open the bayonet fitting and expose the two kidney shaped fill holes.

The base of the cap has a big chunky seal on it, so no worries about leaking here.

In the box you get three different “glass” sections for your tank.

The straight glass comes pre-installed and has a 2ml capacity, and you also get two 4ml bubbles options. 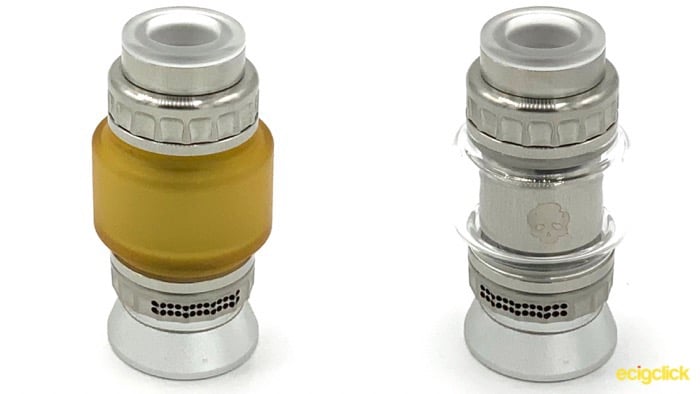 One is glass, which is what I’ve been using, and the other is ultem coloured PCTG (not actually ultem).

The chamber itself shows some good smooth doming, so I’m hopeful this will translate to a very flavourful vape.

On one side is The Vaping Bogan’s skull logo, laser etched onto the metal.

The airflow control ring continues the bottle cap design from the top of the tank, this is definitely a plus as it’s means it’s really easy to turn.

Nice and smooth, but not something you’ll easily knock out of place. One criticism I have is that it’s a little hard to tell visually how open it is, as the outside has a honeycomb design.

Not a problem in bright light, as you can see the metal behind it, but when it’s a little darker you’ll have to rely on feel.

Happily there are stops at fully open and fully closed to help you here.

Dovpo Blotto RTA Mini – the Deck and Base

This is going to be very familiar to people who have used the Blotto, and if you haven’t already, then I highly recommend Gaz’s review of the original Blotto to see some more photos of it.

You essentially have a postless deck, with two airflow posts that reach up and around your coils. Air is fed in from directly underneath your coils, and also from the posts – apparently giving you 242 degrees of airflow!

The coils are clamped in place by flat headed grub screws, so be careful when you’re unscrewing them, as it’s easy to have them back out too far and disappear.

How to Build On the Dovpo Blotto RTA Mini

You build the Blotto mini in exactly the same way as it’s big brother, so check out Gaz’s review for more information. How To Fill The Dovpo Blotto RTA Mini Tank Don’t fill it to quickly though, or your e-liquid can run around the top of the chimney, and seal up the other fill port forming an airlock!

How Does the Dovpo Blotto RTA Mini Perform? I have tested it out with a single coil, but I think it’s obvious it’s still a dual coil tank at heart, so that’s what I base my scores on.

Airflow is silky smooth from this tank.

One criticism I sometimes have with honeycomb airflow is that it can end up feeling a bit “spongy”, especially when the air needs to travel some distance to hit your coils.

Happily that’s not the case here, with the air whooshing through in a satisfying way.

Obviously the amount of airflow is going to vary a little depending on the build that you put in.

I was mostly vaping with 2x 2.5mm fused claptons, and I would say that the airflow goes up to about 8.5 on a 1 to 10 scale – a slight bit of restriction due to the airflow design, but not much.

Cloud production is plenty good enough, with nice thick fluffy clouds. It’s maybe not quite as high as it could be with more space to allow bigger coils, but certainly no complaints here!

Flavour is absolutely spot on.

I’ve tested this with a few different e-liquids now, and all of them have performed really well.

The Blotto Mini is definitely a little flavour banger.

Any Other Thoughts On the Dovpo Blotto RTA Mini?

One thing I did notice, is that the airflow control ring is raised up a little bit from the very base of the tank.

This means that you’re not going to scratch the top of your mod when you adjust it, but it also gives the impression of having a tiny gap between mod and tank. Not a deal breaker, but worth knowing if you’re particularly fussy with how your combo looks!

Would I Recommend the Dovpo Blotto RTA Mini To Someone That Has the Original Blotto?

This is a tough one, as the Blotto Mini is definitely a good tank.

However I don’t think it really stands out in any meaningful way from it’s big brother.

If you don’t have an original Blotto, then I would suggest you pick the size that you prefer and go with that.

However if you do, then I would say it’s only worth picking up the Dovpo Blotto RTA Mini if there’s a particular mod that you need a slightly smaller tank for. Or you really love the original and want to have the flexibility of having another size.

It’s always slightly strange reviewing the mini version of a tank, especially when so little has changed.

Almost everything that was said about the original Blotto, still holds true for the mini. In short, it’s a flavour banger, with really nice machining, and an eye catching design.

I am glad that Dovpo address the criticisms of the glass just sitting on top of the o-ring in the original, and made it much more secure for the mini.

But other than that, there’s really very little that would make me choose one over the other.

You’re going to be getting a great little tank, whichever of the two you get.

And it’s nice to have the option of a couple of different sizes, as it means you can match it to more mods.

Did we really need a Blotto mini?

But it’s certainly another strong release from Dovpo, and the care and attention that Sam put into the original design, is made obvious by the fact that nothing really needed changing.