The Dovpo Blotto V1.5 RTA is an update to the original Blotto RTA.

The Blotto range were designed in collaboration with The Vaping Bogan and also include the Blotto Mini, Blotto Single Coil and the recent Blotto Max.

What To Expect From The Dovpo Blotto V1.5 RTA?

This version shares a lot of characteristics with the new Blotto Max with some improvements in response to customer feedback – which I always applaud.

The first big design change is the deck.

This is for dual coil builds and features a centre slotted airflow outlet plus posts which contain honeycomb airflow holes.

On the original the airflow posts were hollow with an insulator on the rear, however now the posts have an all metal construction.

Apparently the bottom airflow adjustment ring and tank base have been strengthened too – so was there an issue with the original?

Also the specifications mention that the cotton well and wicking port design has been improved.

In theory with the distance from coil to mouth being shorter this should provide a more intense flavour and heat.

Capacity wise this has also increased to 6.4ml with the included bubble glass or 3.5ml (standard) / 2ml (TPD) straight glass.

Refilling is taken care of by unscrewing the tank top cap to access the filling ports.

As with the original you get a great kit with spare glasses and the bottle opener tool which also doubles as a coil leg trimming guide.

As the Blotto Max and Blotto V1.5 are being released together here is a “Show and Tell” video from the Vaping Bogan YouTube channel.

There are 3 colours to choose from – Black, Gunmetal and Stainless Steel.

So some very subtle changes here, but the increase in capacity and reduction in height should be a welcome improvement!

Let me know your thoughts on the Dovpo Blotto V1.5 RTA in the comments below! 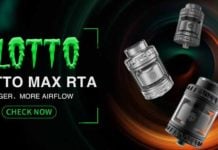