Ecigclick
Home All In One Mods Joyetech eGrip 2 Review

If you’ve read my review of the Joyetech VTwo Mini you’ll know I’ve got a few Joyetech devices in my stash, many of which I use on a day to day basis.

One type of mod that I didn’t have was an “all in one” or AIO device, so the EGrip II came as a pleasant surprise, albeit one tinged with a little bit of doubt as the EGRIP II uses the Cubis vape tank system which I’ve had mixed experiences with.

The EGrip comes in a white box bearing the Joyetech branding in silver.

The top of the box has an image of the device and proudly announces that it has the new firmware version 4.03 and the NotchCoil technology, mirrored in the background which follows the pattern of the Notch coils themselves.

The back has description of the device and features, parts list and check boxes for colour.

The EGrip II is currently available in black, gold, white, red and silver finishes. Is this going to be a contender for best beginner vape kit? Let’s find out..

Removing the lid, we find the EGrip II held in a flocked foam cut-out rather than a tray.

Removing this we find:

The Egrip II is definitely deserving of the description stealth mod. Including the airflow control and drip tip it stands a mere 99mm high, 45mm across and 24mm deep.

Combined with the curved edges and slightly barrelled body it fits snugly in the hand and almost disappears. 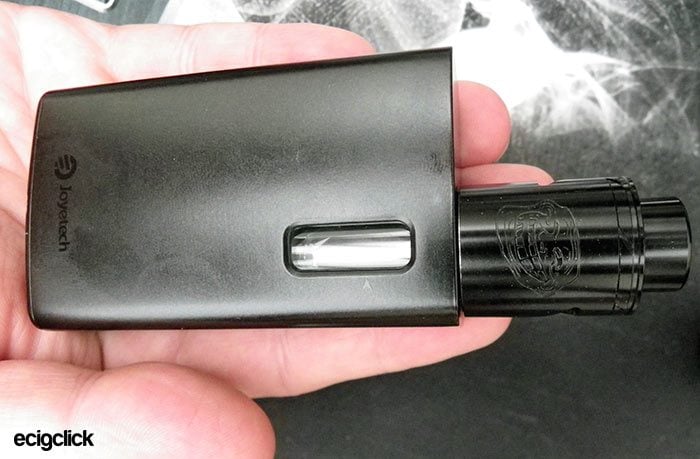 On top we have the familiar Cubis (not Cubis Pro) airflow control and drip tip which remove to reveal the 3.5ml capacity tank and the atomiser stem. On the sides we have the juice windows with small arrow indicators for the maximum liquid level. Obey these or you will have a mess when you come to re-fit the atomiser. On the front edge opposite to the atomiser we have the now familiar display that shares a common interface with the VTC Mini, VTwo/VTwo Mini and others.

As usual it’s bright, clear and features a micro usb port for charging and firmware updates.

On the base we have vent holes for the LiPo battery pack, CE/WEEE marks and a tiny hole allowing access to the reset button.

The specs of the EGrip II aren’t at all bad given the size of it! Joyetech have managed to cram in quite a lot to this dinky thing;

The kit was supplied with the following coils;

The device also has a LED light that illuminates the juice well, the colour of which can be adjusted from the menu. It also features the Flappy Birds game which I haven’t bothered testing.

How Does The Joyetech eGrip 2 perform?

The Joyetech EGrip 2 is comfortable to hold and carry, the fire button fits nicely under the thumb or forefinger.

Temperature control works well in all modes, something we’ve become happily accustomed to with Joyetech devices. 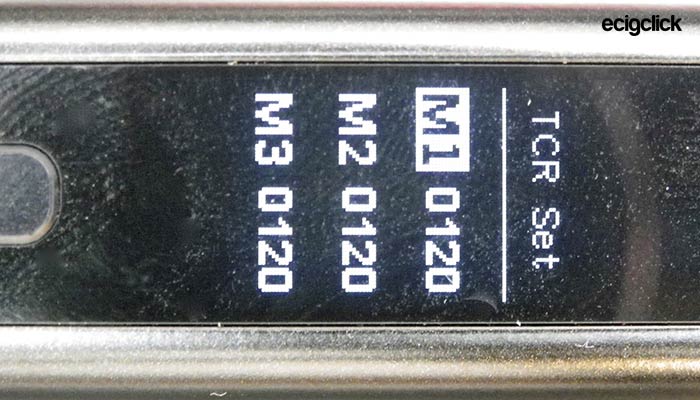 The 510 adaptor works well, doesn’t wobble and doesn’t cause any problems with temperature control. That said the 2100 mAh battery life doesn’t lend itself massively well to using it this way, any decent build will chomp its way through that pretty sharpish.

In use the battery doesn’t become particularly warm but you do get the obvious heat soak from the enclosed atomiser.

Ah, yes, the atomiser…. I said at the start of this review I’d had mixed experiences with Cubis type coils and this one’s no different. The same problem that has arisen with every version to date rears its ugly, nasty head – spitting.

It’s not so apparent with the Mouth To Lung coils but all the others, Notch, 316, RBA etc, to a one, spit e juice horribly. All the tricks you’ll see online about how to prime, don’t prime, pre-heat etc don’t work
and only the RBA went longest (about an hour) before it too gurgled and spat. And that’s with 60/40, 80/20 and max VG e-liquids. And that’s a shame, it’s another nice little vape mod spoilt by an atomiser design that Joyetech seem determined to keep plugging away with despite the negative feedback.

If anyone from Joyetech is reading this: STOP. Take the design away, work out what’s wrong and if it can be fixed.

In the meantime, start using a design that actually works like it should (even the eGo One Mega was better than this!) and don’t ask your end users to do the beta-testing for you.

Unless you’re a Mouth to Lung user that desperately needs a small form device I really cannot recommend the Joyetech EGrip 2.

Which is a shame, were the coil issues solved it would be a good little device.

But as it stands it is unusable other than with the adaptor, a use which the wasted tank space spoils by using up room for more battery.

Would I replace it? No.