The Lost Vape Lyra is another pod system from a brand that is best known for its higher end vape gear with the latest DNA chipset.

Mods such as the Triade and Paranormal have been highly sort after. Just a shame they only seem to do limited runs! Lately, Lost Vape are probably best known for their Orion DNA Go and Orion Q Pod Systems, which were unusually styled at the time, but have subsequently been practically ‘copied’ by a number of manufacturers.

A fellow Ecigclick reviewer who I very much respect rated both versions of the Orion pod System very highly indeed.

What Can We Expect From The Lyra Pod System

The Lost Vape Quest Lyra Pod System – ‘The Lyra’ for short has a hell of a lot to live up to as the successor to the Orion Series.

It appears the Lyra is more of a ‘AIO’ (All-In-One) system as it comes with 2 different coils and is apparently capable of MTL and DTL vaping.

With a 1000mAh battery, solid design, refillable, removable coils, leather feel on each side and pretty nice finish – on the face of it, the Lyra looks to have everything you would expect from a Pod System. The Lyra is such a solid feeling AIO Pod Mod. The paint finish is excellent and it feels very well built in general.

The leather sections on either side are quite thin, so not very spongy and I’m pretty sure I could peel them off with not much effort, so I’m not sure how long they will last before they A) Peel off & B) wear down to the metal structure of the device.

There are also resin panel designed devices available as well, which I haven’t had the chance to see/feel, which actually makes me appreciate the leather as it limits the chances of the Lyra slipping through your fingers. 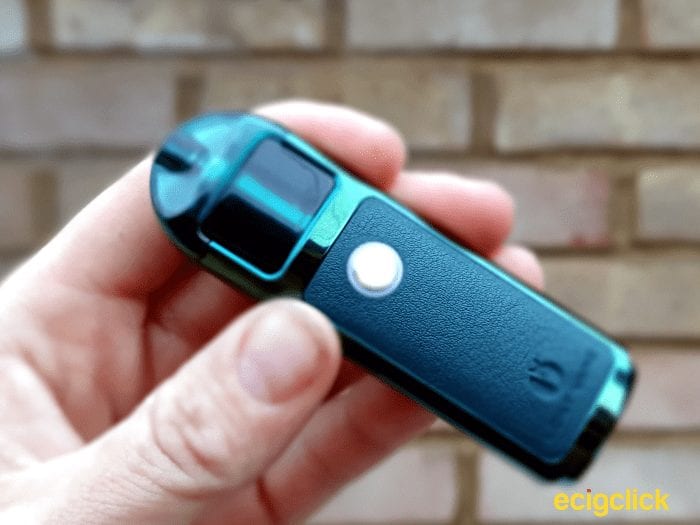 There’s a Micro USB port at the base of the device for charging and 2 nicely sized airflow holes on either side.

You can also screw the lanyard onto the side which I made use of at times, but not to hang around my neck, more to hold onto. Not sure why, maybe its the fidgety type of person I am!?

The Pod can be removed from the device by simply pulling it out.

And there is a nice resistance to it – I don’t think the pod connects to the device via magnets, but more via 2 small notches on either side that ‘click’ the pod into the device.

But it’s held in very nicely and trying the ‘Pod Flick Test’ left me with no concerns over it flying out of the device and smashing on the floor. 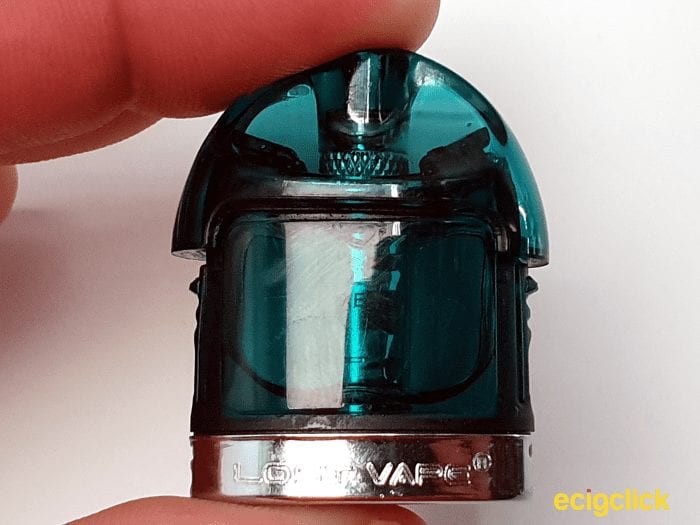 The pod has removable coils, and is also refillable via the 2 filling slots, either side of the coil under the mouthpiece.

The Lyra isn’t too small, but isn’t too big, and its beautifully curved so it feels lovely in the hand. Even though the leather is very thin, it’s still comfortable. The fire button is perfectly located for thumb firing, nice and clicky and protrudes a perfect amount.

The ‘mouthpiece’ section of the pod is absolutely perfect and super comfortable.

It’s perfectly shaped and although in the hand the mouthpiece is a little cheap feeling, its thick enough that you don’t feel like you could crush it with your teeth… If you’re a little weird like that!

How To Fill The Lost Vape Lyra Pod

Like most Pod/AIO Systems, filling is fairly simple, the only minor gripe I have, is removing the ‘Pinch and Pull’ Mouthpiece, which can be a little bit of a pain at times, and also hurts your fingers a little as you pinch it. How Does the Lost Vape Lyra Pod Mod Perform?

As previously mentioned, this is an AIO (All-In-One) system and the 2 different coils are effectively allowing you to vape direct to lung (DTL) with the 0.6Ω coil, and mouth to lung (MTL) with the 1.2Ω coil.

However, in  reality you’re basically getting a semi-restricted DTL vape. More on that later.

One thing I did notice, you do get the odd but of e-liquid or condensation building up under the pod itself, and potentially shorting the contacts inside the device, so be sure to keep it clean and regularly check its not getting a bit wet in there.

Read more about mouth to lung and direct to lung vaping here.

To turn on the device, click the fire button 5 times and the LED ring around the fire button will flash 5 times. Upon firing, the tiny LED indicator will illuminate Green, Blue or Red depending on your wattage selected, to change this, simply press the fire button 3 times.

With the 1.2Ω Regular coil

The LED rim indicator is night and bright and even in sunlight, I had no problems. Before I get to the most important factor.. The flavour.. I need to mention that because the airflow is not adjustable, you’re pretty much stuck with the same airflow regardless of which coil you opt for. There are 2 small holes located high up, on either side of the device.

The best way to describe the airflow is that its silent, and semi-restrictive. If you like a tight MTL draw this won’t hit the spot, and if you like masses of airflow then this isn’t the system for you. It’s somewhere in between.

Nonetheless I was quite happy with it, you don’t have to pull too hard to get a good vape.

But I need to mention this at this point before I get into the flavour and vapour production.

I generally had the wattage set on the highest setting for both coils, but to be honest I didn’t notice a massive amount of difference in flavour and vapour production on either of the 3 settings, only slightly. Regardless of the wattage setting, you get a lovely little vape off this kit, its smooth, slightly warm and has excellent flavour.

I didn’t get many of the deeper notes that I get from RDA’s or Sub-Ohm Tanks. But the sweeter, fruitier notes come through beautifully. Its not mouth-filling, but its satisfying enough for a pod system.

Flavour from this coil is similar to the 0.6Ω mesh – just a little less intense. You still get similar notes from your favourite vape juice, just slightly muted. But that doesn’t mean its flavour-less. Just a little less that’s all.

Generally I was more comfortable with the 0.6Ω mesh coil

With the 0.6Ω mesh coil its a nice little cloud chucker, looking at what I’ve tested in the past, this is possibly the best for vapour production in comparison to similar pod kits.

In fact I’d go as far as to say the vapour production is on par with the Voodoo Drag Baby Trio Kit, which is more of a mini-mod, but also came with a 0.6Ω mesh coil.

Using the 1.2Ω regular coil, vapour production is light, gentle and pleasant. But not cloudy.

1000mAh is enough to last a good day if not more, of course this all depends on which coil you use, the wattage setting and how much you vape. But during my testing, with either coil the device lasted all day and into the next.

I ran the battery down a couple of times, and it takes around an hour to charge so its not really a problem to pop it on charge for a top up when you get a chance. 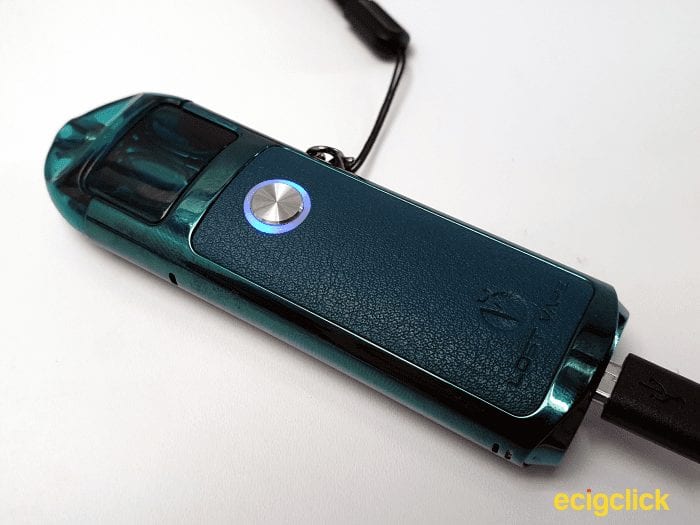 For this review, I used a 70/30 mix of Twisted, which is from the Ice Cream Social range by Vapable. Its a sweet, fruity menthol mix, so a decent all-rounder to test out the coil durability. And with either coil, it wicked like a dream. I experienced no dry hits with either coil and I’ve been using this device for almost 2 weeks. 9 days with the 0.6Ω mesh coil, and 5 days with the 1.2Ω regular coil and both coils are still going strong. That’s on maximum wattage too! Not bad.

Im slightly relieved that Lost Vape have maintained their Pod quality reputation with the Lyra Kit. Although this kit does have airflow flaws which really puts my opinion of this device in a weird place, and the pinch off mouthpiece has genuinely hurt my poor lil fingers a couple of times. I’m fairly sure this device is built to last, forgetting the thin leather which may wear off over time, the rest of the device is solid, excellent battery and generally a strong Pod system.

Its a shame they don’t supply an extra pod, just as a spare. But I’m sure they will be available separately. Or at least a replaceable mouthpiece as thats probably the weakest part of this device. Which is annoying as its the part which gets the most use.

With either coils, it’s pleasant and for anyone looking at using an AIO kit, I think this kit will deliver what they are expecting and maybe more.

This is absolutely another decent starter kit for a new Vaper. Very simple yet has the perks of being refillable and coil-replaceable. In my opinion this is the ideal way for an ex-smoker to start as it gets them on their way without forking out a load of money on non-refillable tanks every few days. It also gives them a chance to try whatever vape juice flavour they like.

Have you picked up the Lost Vape Quest Lyra AIO Pod Kit? Let me know your thoughts in the comments!