As far as mods are concerned this is the second to appear within the Quest range following on from the Lost Vape Grus 100W kit. The Grus 100W mod took a single external 18650 battery but rather sensibly allowed the option of a 21700. Although tubular in design it was capable of taking on tank sizes of up to 30mm diameter allowing the Mod to be used to its full potential.

The name Thelema may be familiar to some because of links with a Lost Vape range of Mods featuring the Evolv DNA chip.

This includes the Hyperion and Centaurus mods – all three use colour screens to front the powerful and popular chip.

In 2020 Lost Vape upgraded their very own Quest chip to version 2.0 and this is at the beating heart of today’s review.

As the name suggests Lost Vape are on a quest. For precise control, stable performance, a powerful experience, infinite possibilities and ultimately perfection.

That’s five points to focus on then, so let’s head into this.

What Can We Expect From the Lost Vape Thelema Quest 200W Mod?

It seems that Lost Vape is well aware of its status as high end product manufacturers.

Having realised DNA versions aren’t financially viable to everyone, they’ve opted to include the more affordable Quest V2.0 chip while retaining the well known Thelema moniker. Expect a very stable performance from the chip given the low defective ratio of 0.05% since its release.

The Mod is said to fire almost instantly (within 0.01 seconds) while a strong, punchy vape is delivered constantly whether using a pod, sub ohm tank or RDA.

Additionally, expect heaps of versatility from the vape modes which include standard wattage, voltage and temperature control. The mod takes dual 18650 batteries (not included) and can hit hard to a maximum of 200W using a total of five vaping modes. These are wattage, temperature control, VPC, voltage and bypass.

I’ll be taking a look at all but temperature control mode. I apologize in advance but it’s just never interested me after discovering an allergy to stainless steel. That alone stopped me using Titanium… Fast type C charging is an option for those without dedicated, external chargers so handling batteries can be kept to a minimum. If using type C always remember to periodically check the physical condition of the batteries.

Multiple safety measures have been incorporated into the chip offering protection against short circuiting, a weak battery, overheating and a 10 second cut off for those with iron lungs!

The Lost Vape Thelema Quest 200W Mod can be purchased as a standalone product or available in kit form with the UB Pro Sub Ohm Pod tank.

I’ll be reviewing that one in the near future.

This is quite a heavy mod and at 150g carries some clout even before installing two 18650 batteries. Maybe aluminium alloy would have been a better choice over zinc.

It’s not the most compact dual 18650 Mod either and very much follows designs that are a little dated when compared to the Voopoo Drag 3 Mod for example.

The removable U shaped battery door is easy to slide on and off and can be slotted in either way up.

A series of star drive screws hold the carbon fibre style padding in place which has a certain amount of give and feels comfortable when held. On the base is the “designed and manufactured by” stamp alongside another two star drive screws. There’s no sign of any battery venting which is a shame. Standard tanks, RTA’s and RDA’s of diameters between 24 – 26mm will be suited to the width of the Mod but anything over this will cause overhang. Not a pretty sight! 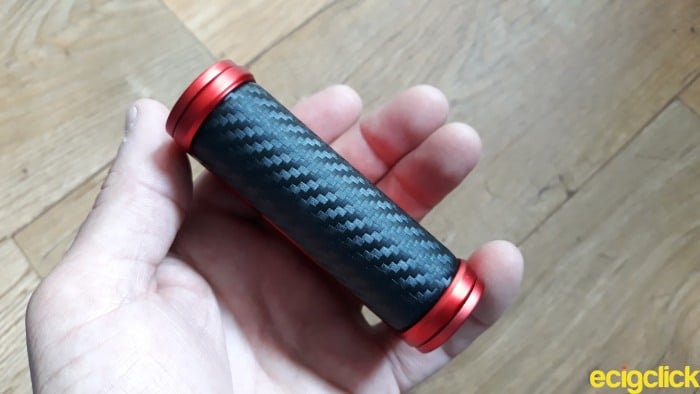 Three more star drive screws are located around the 510 connector plate on the top of the mod. The plate appears to sit a little uneven so maybe one of the screws is slightly loose. 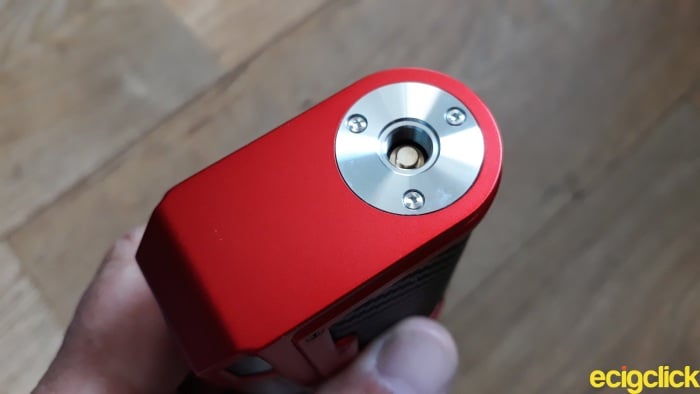 The threading on the 510 connector is fine with no crunching or squeaking when screwing down multiple tanks. It takes some force to push down the gold plated 510 pin but it is spring loaded.

It’s comprised entirely from a strong and durable plastic.

The upper connecting pins have plenty of adjustability so inserting batteries is very straightforward and hassle free. Etching in the plastic make it clear as to which way the batteries should be inserted. Was there any battery rattle?

The fire and menu button layout will look familiar to anyone owning a DNA box Mod in that the one in the centre acts to select an option.

The raised fire button is 11mm and the menu buttons are evenly spaced below the main screen.

Fingers wrap comfortably around the Mod while the thumb is always poised around the fire button, I’m something of a chain vaper so can very much appreciate that.

The type C USB charging point is the same width as the menu buttons creating good symmetry while the 0.96 inch display itself sits slightly above centre.

There’s a settings menu at the bottom of the home screen.

Scroll to select it then press the centre menu button. Information about the installed coil can be found here along with screen brightness and colour themes.

The user definable settings can be altered, a factory reset can be carried out and the current firmware version can be viewed.

Lost Vape Thelema Quest 200W Mod – How Does It Perform?

With each test I used the Vaporesso Forz RDA single coiled with a Wotofo fused Clapton running at 0.26ohm.

Let’s start with the default setting.

Power mode appears when the mod is fired up for the first time. Power is adjusted in half watt measures but will alter much quicker with the menu button held down. Once the maximum of 200W is reached the Mod will round Robin back to 5W.

Three user definable power settings are available and are managed in the User option of the settings menu. It’s possible to create a soft, normal or hard vape characterised by the variables assigned to each.

Power mode also makes use of a boost function which can be set to soft, normal or hard. I didn’t really notice much difference in performance when using this function.

I was expecting a more effective ramp up time with the Ni80 coil but unfortunately it didn’t materialise.

It’s still a great mode to use for the relatively new vaper because it works very closely with the coil, providing regulated power output when altering wattage.

VPC stands for variable power curve and may not be suited to a new vaper. It takes some tinkering to fine tune the power of the vape. For example the vape can begin at 40W and steadily climb to 50W over eight half second increments.

After a four second period the power remains at the last determined wattage setting. It does work a treat though. I noticed subtle changes to the intensity of the vape over a four second inhale. So this option works like a tailor made boost, affecting the flavour qualities of the e juice.

Remember to create your own curve in a subtle fashion or you could be in for a few surprises with VPC mode lol!

This one is self explanatory and many experienced vapers prefer this option, myself included. Voltage mode offers a very basic way of increasing power without the need for altering wattage.

As a word of warning, take care when using older coils, especially DIY ones as voltage mode doesn’t take into account any resistance variables in the way standard power mode does. I vaped at 3.9V using the 0.26ohm resistance coil and the result was lively and punchy. I received a very consistent, warm and flavoursome vape that actually trounced the experience of standard power mode.

The ramp up time in voltage mode was a vast improvement over power mode. It was stronger, more powerful and held a consistent and tasty vape in comparison.

If you’re looking for more power with an intense, saturated vape I highly recommend giving voltage mode a try.

Boost mode is unavailable on this setting. As the batteries deplete so will the performance and quality of the vape. Bypass mode is the choice of mech Mod users so the Lost Vape Thelema Quest 200W effectively acts as a gateway into that style of vaping.

It’s worth checking out just for the initial kick from a pair of freshly charged batteries!

Vaping this way is fine but it doesn’t take long to get through a tank of e-liquid and RDA’s need dripping more frequently. I’ve often fallen foul of a few dry hits too – simply because I’ve never grown used to using this mode.

If a hot and feisty vape is your thing give bypass mode a look. Two fully charged batteries will bring out the best of dessert, bakery or tobacco inspired profiles.

Access these settings from the home screen by scrolling down to settings at the bottom of the screen.

Scroll down to User on the settings screen, and use the centre menu button to select it. 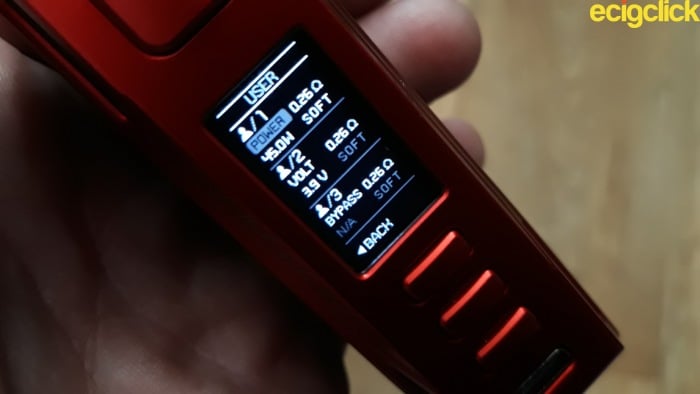 There are three settings, each fully adjustable and customisable to any of the five main vaping modes.

From the home screen it’s possible to alternate between any of the three user defined settings at the press of a few buttons.

This option highlights the overall versatility of the mod and a great way of getting different vape styles in a quick and convenient way.

Aside from a few visual screen niggles there’s really not much to fault.

Admittedly it’s not the lightest dual 18650 mod on the market but the weight does add to an overall solid feel.

The padding of the carbon fibre styled fabric feels comfortable when clasped in the hand.

The magnets on the battery door are strong and dependable and the raised fire and menu buttons are large and chunky in comparison to others mods out there.

What it comes down to is how well the Quest chip performs, of course.

I’m going to be brutally honest and probably upset a few DNA fans but Lost Vape has really pulled out all the stops with this mod, to the extent that it rivals the Evolv chip. Firstly, the menus are easier to navigate (free of E scribe software features) which will make the mod more appealing to those without access to a PC.

Setting up three independent vaping styles is very easy and all are instantly accessible from the home screen.

It’s the versatility of the device that really appeals to me…Why?

Simply because of how each mode offers a different experience to both flavour and vapour production. I’m generally a big fan of standard wattage mode but in this case voltage mode wins hands down.

That’s due to the efficiency to replicate a flavoursome vape every time.

I would highly recommend the Lost Vape Thelema Quest 200W mod to any intermediate or advanced vaper.

For once, the words really do live up to the hype.

Who needs a DNA mod when the Quest chip performs this well?