The OFRF nexMESH sub ohm tank is from a new company formed in August 2018 and introduced to the world in October of the same year. Not long after that the OFRF Gear RTA was released.

The nexMESH sub-ohm tank by OFRF

As I mentioned earlier, OFRF are a relatively new company so putting a sub-ohm tank out on the market with so many out there already was a pretty bold move, especially considering there are some really top quality performers.

The tank certainly puts itself out there to be a top quality sub-ohm tank with its main selling point being its Conical Mesh coils. It comes in at 25mm in diameter with adjustable tri bottom airflow.

After a lot of hype we ask the question. Is it all that?

The OFRF nexMESH sub ohm tank was sent to me direct for this review. As always, I will give you my own, honest opinion of this product after a lengthy testing period. 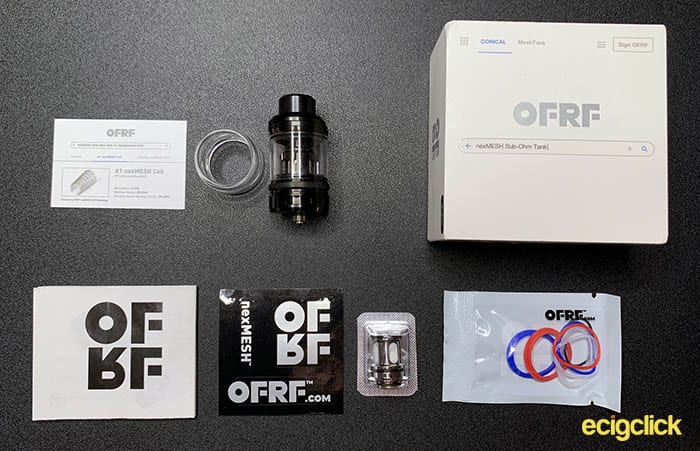 The OFRF nexMESH Sub Ohm Tank is well made on the whole. There was no residual machine oil, sharp edges or burrs to be seen anywhere.

The threads, however, are a little gritty and crunch a little when you are unscrewing the tank.

The airflow control ring at the bottom of the tank is a little different from most being that it has three air inlets rather than the normal two. The design is pretty much what you would expect from a sub ohm tank, except for a few points.

After a while, because of the way the drip tip chamfers off at the bottom, residual e-liquid/condensation builds up and must be wiped away every few hours. Also, the drip tip is quite loose and any other 810 drip tips you care to put in its place have the same loose connection. This can easily be remedied by a bigger o-ring.

One other design fault, in my opinion, comes if you are using a larger chubby bottle to fill the tank up with. Also, when you go to slide across the top cap to reveal the fill port, mine required a lot of pressure to actually open it up.

The tank comes in six colours, Black, SS, Gun Metal, Sapphire Blue, Gold and Spectrum. Right off the bat there’s pretty much a colour for every taste. How Does the OFRF nexMESH Sub Ohm Tank Perform?

Whilst there are some bloody good sub-ohm tanks out there, with some recent releases standing out, I was expecting the nexMESH tank to be an excellent performer. Up there with the best in its class.

Especially knowing how good their nexMESH performs and the highlight of the coil system being conical.

Before we get onto the performance though, first let’s take a quick look at the filling and coil change functions.

How To Fill The OFRF Sub Ohm Tank

To fill the tank: I tested to see if this fill port was leak resistant as claimed. I’m pleased to say, if the tank is tipped upside down with the top cap open, the e-liquid doesn’t empty all over, pretty impressive!

How To Change Coils in the nexMESH tank

Changing your coils out is a pretty simple process. The coils for the OFRF nexMESH sub ohm tank are touted as being pretty special. They aren’t just any old coil, oh no.

Firstly they are mesh, that isn’t a biggie in this day and age as most brands utilise mesh now.. BUT, the difference with the OFRF coils is that they are “Conical” no less. 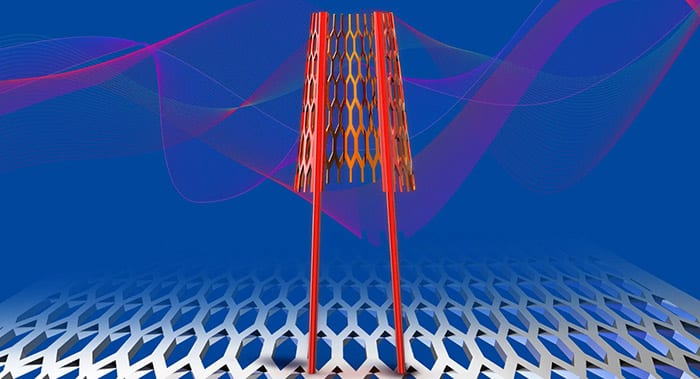 Now, whilst the coils looks amazing I’m also expecting them to be something special.

OK, so there are two nexMesh coils in the kit.

The A1 0.20ohm coil is pre-fitted and OFRF recommend you use these coils between 75w and 85w for maximum performance.

Looking for a powerful, warm throat hit with massive vapor and amazing flavour, then this coil is for you. Featuring a slightly thicker mesh weave and operating at resistance of 0.20ohm this coil delivers amazing flavour profiles at between 75w – 85w,

This coil comes as a spare in the box.

Prefer a smoother, softer sub-ohm experience that still delivers a massive flavour hit then the nexMESH stainless steel conical mesh coil is the right choice for you.

Ideal for those of you who prefer temperature controlled vaping the nexMESH SS has a resistance of 0.15ohms and delivers amazing flavour profiles without the risk of a dry hit at between 350F-540F/180c-280c.

Don’t have a temperature control Mod? Simply set your wattage control between 55w-75w and experience the silky smooth flavour of your favourite juice.

I used the same vape juice with both coils, a 65VG/35PG mix from Future Juice.

I was getting a little more flavoursome vape from the SS316L coil over the A1 coil but only just.

Both the coils for me broke in at around ¾ of a tank and the flavour started to drop off at a little over a week and a half.

The A1 coil was used of upwards of two weeks where it could have had a little more life left.

It has to be said, I was expecting the OFRF nexMESH sub ohm tank to blow me away. I really wanted it to blow me away. OFRF told me it was special. It has conical coils so it would be special right? Wrong!

As previously mentioned, the SS316L provided me with the better flavour on this occasion. I still wasn’t blown away though.

As for cloud. Whilst the SS coils provide decent vapour production, the A1 coils are certainly the cloud chuckers out of the two.

I rarely prime my coils and just put the e-liquid in the tank and leave it to stand. Even without priming the coils I was able to start vaping within a couple of minutes and both coils had no problem at all staying moist even when chain vaping.

OFRF have a dual layer of cotton on the coils so this would certainly help with keeping the cotton wet at all times. So no dry hits here even under heavy use. I felt massively let down by the OFRF nexMESH tank. For something that was touted as different and special this was, for me, just a bit meh..

Whilst I’m certainly not saying it’s a bad sub ohm tank, it’s certainly nothing special and there are a few sub-ohm tanks out there on the market that, for me, are better.

Did you buy the OFRF nexMesh sub ohm tank? What did you think? Let us know in the comments below!