So will the smaller see-thru version impress me as much? We shall of course find out in this vape review.

Speaking of which, a bit like the size of the Rincoe JellyBox Mini, this vape review will be shrunk down a little too…

That’s not a case of ‘I can’t be bothered‘ – more the only difference is the size. Same tank – same coils – same menu options etc etc.

Rincoe has a decent track record as a vape company with a few that have certainly caused a buzz in the world of vaping.

The Rincoe Mechman X Mesh and Nano RDA kit spring to mind as does the flavourful Neso X pod kit.

What Can We Expect From the Rincoe JellyBox Mini Vape Kit?

The same quality build, flavour and clouds as from the Rincoe Jellybox 220w kit is the short answer!

Except smaller in size…kind of lol. The chip and menu are the same and without being too obvious lol – this one only hits 80w – the included coils don’t go that high, however the RBA head from the Rincoe Manto max does.

The LED lights remain and like the menu you can change the colours should you so wish.

So, when all’s said and done, it’s a case of ‘does size matter?‘ and how much power do you want?

OK, the Rincoe JellyBox Mini vape kit was sent direct from Rincoe – thank you – and as always my thoughts and opinions are not swayed by freebies. Just like its big brother it has x3 see-thru design tints to choose from and comes topped with the JellyTank.

It stands slightly taller than the larger version – but only a touch – and is about half the size width wise.

From the photos you can see it’s quite an angular design – more on that in a mo’.

Inside the box are x2 coils – 0.3ohm Mesh coil [installed] and the 0.15ohm – the exact same ones as in the larger version.

Indeed, the words ‘exact same‘ will feature more than once in this vape review…

Just like the original, the Rincoe JellyBox Mini is made from zinc alloy and tough Polycarbonate, as is the JellyTank.

It really does feel good in the hand with a good weight to it and definitely feels ‘premium‘. As I mentioned, the overall design maybe long and angular, but it is extremely ergonomic – whilst the over sized fire switch has a nice rocker action to it – sensitive to the touch to.

The clear and tinted design means you can see through the mod and the LED lights that glow for a second or two on firing, really does add a nice touch.

As you can see, I received the tinted black version and very smart it looks too – slightly darker than the photo shows. A reminder that being see-thru you will see your battery wraps – so either match them up or show them off!

How Does the Rincoe JellyBox Mini Perform?

I’ve gone into much more detail on the chip and the coils in the review of the JellyBox full sized kit – and as I’ve said it’s the ‘exact same‘.

So much so, I’m able to ‘copy and paste’ the Quick Start Guide:

Given the coils are the same too – here’s how to swap them out and fill the JellyTank: A reminder – there is a small adaptor to screw the coils on BEFORE popping them back in the tank.

I’ve forgotten a few times and had to dig around in the recycling bin for it!

It’s a bit of a pain in proverbial if I’m honest, but means other coils such as those from the Rinco Manto Max AIO can and do fit – as does the RBA head [see review for how that performs].

I could bore you all with an in depth look at each of the coils. Suffice it to say, and nope, I’m not being lazy – they perform just as well – I mean why wouldn’t they – same coil and same tank 😉

The flavour is in the mid to high 7’s and it increases as the coil breaks in – 2 fills and a bit before the flavour hit peak in my case.

As to the clouds, that will depend on the vape juice you use. In this case my 70/30 VG/PG mix of the delicious Ohm Boy Volume 2 Cranberry, Apple and Raspberry created plenty of vapour.

Not a lot more to say really – it is the exact same kit as the larger version…only smaller…me being Captain Obvious again!

One thing I will say is being able to use a 20700 or 21700 battery is a bonus giving you plenty of vape life off the included coils.

In the case of the Rincoe JellyBox Mini kit it’s really down to what size and design you prefer.

This performs very well indeed – as well as the larger version – and both take the same coils and tank.

You can of course opt to pop your own tank or rebuildable on there too.

Being able to use the Rincoe Manto Max RBA head is a bonus.

I do like single 20700/21700 vape mods and this one certainly feels good in the hand – despite it’s angular looks.

So yeah – I like it and to be honest, at the competitive price, you can justify buying both…

Note: you can buy the full kit OR the mod on its own – that’s both the big and mini version 🙂 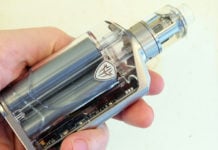