If you’re on a quest to find the tank that has a perfect mix of cloud chucking and great e-liquid taste, then the SMOK Brit Mini Flavor Tank might be one that you’ve considered. SMOK has a good track record of creating tanks for the mass vaping market with the TFV8 Cloud Beast being one of the ‘go to’ vaping tanks for vapers that want a diverse range of vaping options.

Tanks aren’t the only thing they do well. Their recent vape mod releases have been nothing short of superb, with the likes of the SMOK Alien, X Cube Ultra and G Priv 3 mod leading the line.

Personally I didn’t get on with it but then I’m a fickle fellow.

To be honest you’d have to really impress me to move me away from my favoured Aspire Cleito and Atlantis EVO – so reading the blurb on the Brit I was intrigued.

Could this little baby really chuck out great clouds and flavour at an apparent sweet spot of just 25 watts?

I have to say I wasn’t convinced – but let’s look at what I found.

As we have come to expect from SMOK the packaging is first rate and as usual there’s plenty of spares as well as the ‘scratch n sniff’ card to check authenticity.

What NO tank ring? One assumes the key feature of the Brit Mini Flavour Tank is three fold.

Firstly we have the compact size – at just 2ml tank capacity the size will please the TPD but not most vapers who tire of filling every hour or so.

The second would be its ability to chuck out those clouds even at lower temperature and wattage.

And thirdly SMOK claims the taste profile is superb.

As you might expect from a vaping giant such as SMOK the build is at first glance excellent and I do like the stubby design with the tapered drip tip.

However once you take it all apart then I began to have a few issues. The coils are a sod to screw in – they just don’t seem to want to fit into the connector.

In four years of vaping I’ve only ever broken one glass tank and that was early on when I really had no idea what I was doing.

I broke the Brit Mini Flavour Tank glass within 5 minutes of swapping out coils as I’m guessing the coil hadn’t screwed in properly [after numerous tries] and turning the tank on its side the O ring decided it had had enough and off dropped the tank shattering everywhere.

So be careful it ain’t safety glass and I have the cut to prove it!

On the plus side once I’d added one of the new juice flavours from the VIP Arcadia range there was no taste of manufacturing oil – which seems an odd thing to say but the last couple of tanks I’ve reviewed have tasted extremely funky!

How Does the Brit Mini Flavor Tank Perform?

If you can get past the first test of swapping out your coils successfully and then keep the O ring gripping the glass tank – you’ll be ready to fill.

It’s a top fill design and a simple matter of unscrewing the top cap and drizzling your e-liquid into the tank – avoiding the central chimney of course as this will flood and give you a mouthful of juice! The drip tip is removable but I quite like the one included and the two top airflow holes are tight but that means there’s little or no chance of them opening or closing on their own accord.

However given the small size of the top-cap, turning them can be a little tricky and as I can testify sometimes if you grip a little too tightly the tank itself unscrews from your mod.

And that’s another point I found annoying – screwing the whole thing onto your mod.

I used the Brit Mini Tank with my trusty Innokin Coolfire IV TC 100 and SMOK’s own R-Steam 80.

Given this is a tiny tank actually getting a purchase on the whole thing to screw it onto your mod is a bit of a pain to say the least. I screwed too hard and the O ring popped off leaking e-liquid everywhere – there just doesn’t seem to be anywhere on the base to grip.

However I found by adding one of my tank rings I was able to take the tank off and on more easily – shame SMOK didn’t add one to the kit!

OK enough of my moaning let’s see if it lives up to expectations with flavour AND clouds.

Vaping With the 1.2ohm Coil

SMOK tells us this coil operates between 15-35 watts with 25w its sweet spot. So that is what I dutifully set it too.

I used a tobacco flavoured e-liquid and let it soak in for a good 10 minutes.

Firstly I was blown away by the taste and throat hit.

It was probably the cleanest taste I’ve had in a long time and even at 25w with a 50-50 PG/VG mix the clouds were impressive to say the least.

I dropped it down to 15w and whilst the flavour dimmed a touch there was really no discernible difference in taste or indeed vapor production.

For once the airflow holes did make a significant difference and unlike some tanks I’ve reviewed opening and closing them are not just for show.

Open fully and there was no loss of flavour but more clouds – barely open and the clouds were still great and the flavour far more intense.

The draw was of course tight when almost closed but not uncomfortably so and the mouth to lung style of vaping was enjoyable.

Vaping With the 0.6ohm Coil

Operating between 15-25w SMOK tells us this coil is at its best at 20w and that is exactly what I found too. The flavour on this coil wasn’t quite as good and given I was using my current favourite 70/30 PG/VG e-liquid; I’ve come to know the taste well.

However cloud production even at a lowly 20W was again impressive with my office soon filling up with that sweet smoky haze.

It did drink the juice quite alarmingly though! Which is to be expected with many of the SMOK tanks of late.

Again the airflow holes made a notable difference with fully open meaning a ton of vapor with barely a loss of taste.

When almost fully closed the flavour was rich with barely a drop in vapor.

I like the compact shape and drip-tip design – but with that comes the max 2ml tank which I don’t like – like I said I’m a fickle fellow! Having said that, as a tank that has likely been designed to meet UK regulations you can only blame the TPD regulations for this.

I enjoyed both the flavour profile and cloud production on both coils however the sub-ohm coil wasn’t quite as good.

I found the coils an absolute pain in the proverbial a** to screw in – they just do not want to sit right and even when you think they’re screwed in tightly my mod was blinking Check Atomizer.

I found the glass tank did not seal tight enough on the O ring and have the smashed tank [and blood] to prove it – and yeah I did swap out the O ring but the fresh tank was the same.

Also unless you have sticky fingers – rubber gloves or a spare tank ring – screwing the whole thing onto your mod is a bit fiddly as there’s nowhere to grip to ensure a tight fit [insert your own smutty jokes here lol].

I’m on the fence with this one.

Yes it does what it says on the tin – delivers a great taste profile and superb vapor production, it’s just getting the tank filled and onto the mod I found a bit of a let-down.

But hey that might just be my clumsy fingers and thumbs approach to most things but I can only review how I found it so don’t let me put you off!

If it’s a great taste – great clouds at a lower wattage you want then this is a great vape tank for sure.

If I lost it at a Brit Pop reunion concert would I replace it on my vaping Wonderwall?
Maybe [I said maybe] 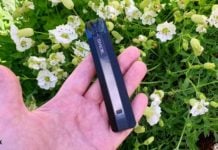