Introduction: The Drop From Suorin

Yay here I have the new release from Suorin the weeny cutie the Suorin Drop Pod Mod. Our main man Jonny reviewed the Suorin Air and was very impressed. So will the Drop follow in these great footsteps?

The Suorin Drop is an All In One Pod Mod. There is a metal battery and you slide refillable pods into the battery housing.

The Drop is marketed as being a super portable stealthy mod which fits in the palm of your hand.

Apparently the company Foxconn produce this and the pods – they are the manufacturers behind iPhones and Playstations.

It is an automatic device so no buttons or adjustments simply inhale on the mouthpiece and it will fire up. First off the packaging is beautiful.

Until you get to the instructions – which are pretty basic, poorly translated and missing some important info – you will see further on in the review.

When you get the drop out of the box you will be amazed at the weight of it, it feels soo sturdy!

I received the black one for review and am constantly wiping it, binning photos I have taken because of dirty great finger prints and wiping it more! But it is very beautiful! There is also a limited edition in rainbow which looks even prettier. There are no buttons or adjustments as I mentioned above because this is an automatic device. An air pressure sensor triggers when you inhale and switches on the fire function. This is pretty quick too! 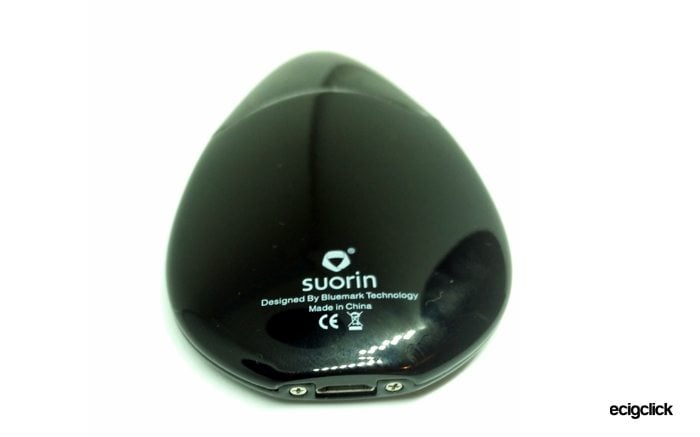 There is a large blob on the front with the Suorin logo – that is all it is – it is not a button or light – just a logo.

I have tried to pull the drop out of my mouth super quick so I can see the colour of the light – and sometimes I do catch it but it goes off very quick when you stop inhaling – which is a bit poor. How Does the Suorin Drop Perform?

Well not much to explain here!

You assemble, fill and charge – see the how to guides below and simply vape!

There is an LED indicator nestled below the pod and that will display the charge capacity remaining when you take a vape:

However the light is difficult to see and to be honest when it turned red I only had about 2 vapes and it shut down.

The light also illuminates during charging- but no idea what it means – the manual didn’t say.

How To Charge The Suorin Drop

Use the supplied USB cable, plug the small end into the charging port on the base of the Drop and the other end into a suitable USB outlet. 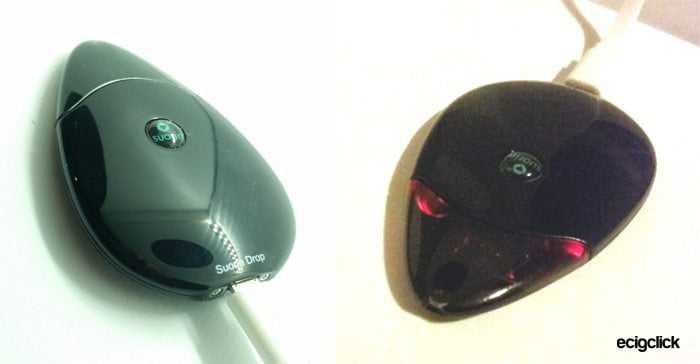 I’m really not sure what the lights are doing?

The battery was fully discharged.

I have seen reports online (not from official Suorin channels though) that this is fully charged in 45 mins. However my experience was a bit different.

When I started charging the LED was red.

3 Hours later the LED was blue but the light was still on? No idea if the light goes off or flashes or stays on when charged? The instructions do not tell you?

Is this fully charged at 3 hours? Surely it must be?

Just to be really thorough I left it another 2 hours to see if any lights went out – and nope still just blue light?

I am a bit scared of complaining about the poor battery capacity – if I haven’t fully charged it – but at 5 hours of charging for a 300mAh battery it really should be charged by now?

So lots of questions here that I cannot answer.

The pod contains the coil – and the coil cannot be replaced. Therefore when the coil has reached the end of its life you simply change the pod for a new one.

Signs the coil has had it are poor performance (with full battery and full pod), burning taste or it will not fire up at all.

I found the pod quite difficult to remove.

There is nothing to grip to just pull it out and ended up wedging things into the sides to prise it out. 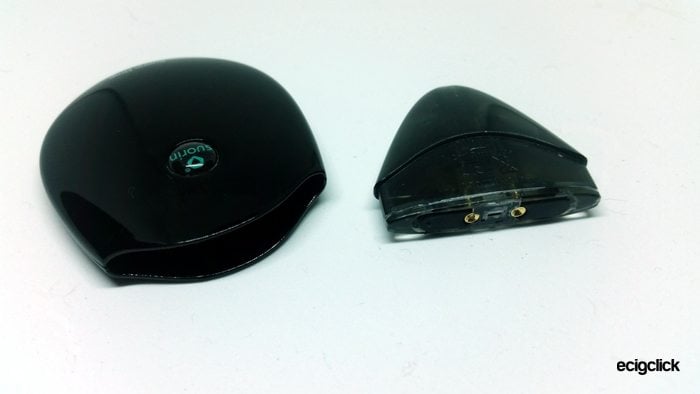 One massive tip is to make sure you remove the little sticker from the base of the pod – you will have to do this anyway to add liquid – but if you don’t it won’t fire as this isolates the electrical contacts.

How To Fill The Suorin Drop Pod

A warning card is included in the box stating you must leave the tank for 5-8 mins after filling for the first time to make sure the wicking material absorbs the liquid. If you don’t do this you will get the taste of burning cotton!

The card also states the minimum VG content of the E-liquid you should use. Do not use below 60% VG. The optimum mixture according to Suorin is 70% VG. Make sure the rubber fill port plugs are fully pushed in – if these are protruding slightly there might be difficulty in the electrical contacts working. I have seen a few mentions online of the device not firing unless you press down on the pod – and I can’t help thinking if the plugs are causing this issue. I haven’t had this happen at all so far. So if you do get a misfire check the plugs are fully closed.

The included coil is part of the pod and not replaceable.

I used my usual favourite 80% VG E-Liquid with 6mg of nicotine in the drop and it worked amazingly well! No dry hits, no spitting, no gurgling!

I had no leaks at all – if you do get leaks make sure that the E-liquid you are using has more VG than PG.

Well as for flavour – I am just so so so impressed!

I have had higher power, lower resistance tanks which haven’t given this much flavour! What a wonderful little coil and pod.

The vapour is as to be expected, no clouds but perfectly good.

A nice throat hit and surprisingly warm vapour are just the icing on the little Drops cake – wow.

I am really really enjoying this – I didn’t think it would be this good I do have to admit!

I would recommend for a starter vaper or soon to be ex-smoker to go for a higher nicotine strength – possibly 12-18mg. This can be difficult to find in higher VG liquids as required by the Suorin Drop. So look at the possibility of using Nicotine Shots or Short Fill E-liquids to up the nicotine strength or Nicotine Salt E-liquid if you find you are still craving ciggies.

This is the big downside with the Drop.

It isn’t as good as similar pod mods.

The battery capacity is only 300mAh to start with and it does not last long.

I was quite sad as I am loving vaping with this and then you catch a glimpse (if you are lucky) of the red light, then 2 vapes and it conks out on you.

So far I have only vaped through 2 pod fills using the Drop as the rest of the time it is on charge sadly. I really miss it when it is charging too 🙁

I am very worried I am being overly harsh about the battery – it is only a small device so it will only be a small battery. But it does need to be practical.

I have even been over cautious to make sure I have FULLY charged it – in case it was my error – but after 5 hours connected up it should have fully charged.

Have I hammered it and used it harshly? I have only managed to vape 2 full pods – so if I was using it excessively surely I would be topping up with liquid more than I was charging it?

Maybe my battery is faulty – I really don’t know – all I can tell you is how this performed for me.

I would happily have this mod slightly bigger and have a better capacity battery. This is really small so a few cm added to the length or diameter really wouldn’t hurt.

The flavour and vape experience really really threw me – was not expecting it to be that good!

If you want a tiny stealth mod with loads of flavour for a couple of hours use this is the pod mod for you.

I think if you gave this to a smoker or recent ex-smoker they would really enjoy this. The flavour, vapour, throat hit and airflow are spot on and I love it.

The battery life is pretty restrictive and I am finding I am not taking it out with me much as I need to take 2 devices – so I might as well take the better capacity battery device and leave the Drop at home.

I am quite sad to be so negative as it vapes really beautifully but it’s on charge more than it is in my hand. I sit here now looking forlornly at the red light on my Suorin Drop willing it to charge and be in my hand again soon…sob