The Uwell Valyrian II tank is the follow up to the hugely successful almost legendary original, meaning this new version has a lot to live up to.

Uwell, are a household name in the vaping community, but for those that don’t know, they are based out of Shenzhen China and have a massive list of tanks, mods, pods etc in their repertoire. We’ve also reviewed the Valyrian II full vape kit – the mod and of course tank can both be bought seperately.

You should be able to find the Uwell Valyrian II tank in a lot of brick and mortar stores (Although in the UK it will be the 2ml TPD version) and you won’t have any issues finding this online.

Game of Thrones fans will instantly recognize the name of this tank, as it comes from an area in the TV show called the Valyrian Peninsula – there be dragons ahead…

What Can We Expect From The Valyrian II Tank by Uwell?

The UWell Valyrian II is a stock coil Direct To Lung (DTL) tank.

You have a choice of 4 different coils, 3 mesh options and one wire, 2 of which come supplied with the tank.

This is not the 2ml TPD version so we will not be talking about coil adapters.

Available in 6 colour options, one is bound to match your favourite mod.

The tank has a huge 6ml capacity that UWell boasts has self-cleansing technology and states no more e-juice leaking from the airflow holes.

If this to happen once – I’ll get a photo of it.

The tank is made with Stainless steel and Pyrex glass.

A Delrin 510 drip tip tops off the ensemble on the flip top.

Of course being a 510 drip tip makes it easy to swap with your preferred tip.

We have two mesh coils supplied with the Uwell Valyrian II, and we’ll go into those in more detail later on.

Right, lets get into this big fella and see how quick I can get the smoke alarms to go off in the house.

The UWell Valyrian II was sent to me for the purposes of this review.

I will give you my honest opinion, and I have been testing this product for a couple of weeks. 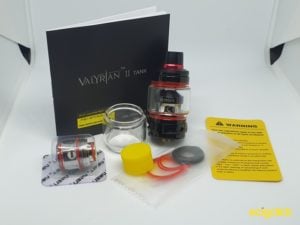 I received the UWell Valyrian II in red and black- and I think it looks really good with the red O rings and the matching red ring on the Delrin drip tip. It is a big tank, with a 29mm diameter, if you are not a fan of overhang, you should take the width into consideration when choosing which mod to use this on.

I went with the Lost Vape Triade, I think it is a nice pairing. Something to consider when pairing with a mod, only one of the coils has a recommended starting wattage of 80 watts, one having a 100 watt low end recommendation.

There are not going to be many single battery mods that are going to be able to handle this.

None of my single battery mods go past 80 watts, to be honest, any of them will only hit that 80 watt mark with a fresh battery.

From the offset, I do have one issue, the flip top.

Yes it works and it springs back with some force.

It feels flimsy and I really am expecting it to fly off at some point. The airflow is fully adjustable.

Three pretty big airflow holes go around the base of the tank.

Opening and closing the airflow is so easy, zero stickiness even after two weeks of solid use.

It’s noisy with the airflow completely open, wow its loud, regardless of the coil I was fully expecting a pack of wild dogs to come over the horizon!

It really is quite a loud whistle.

Closing down the airflow will reduce this noise though, but if you like it wide open, best to have some doggy treats handy.

Now, lets have a quick talk about this new self-cleaning technology.

UWell claim that this new technology will stop juice coming from the air flow ports.

It basically recycles the residual juice back into the coil.

In most part, this appears to have worked well, however, I did have one occurrence of leakage from the air port.

To be clear, this was halfway through the first week of testing AND only happened once, a fluke maybe? Two other coils are available to purchase separately, a quad mesh and a dual wire coil. The coils are large with big cotton feeds, cloud expectations are pretty high with these, as is flavour considering what Uwell have been releasing recently.

How Does The Uwell Valyrian II Tank Perform?

Yes I had that single leak issue which I have no idea how or why it happened, but for over a week after that there wasn’t a dribble out of it.

We’ll get into the flavour and clouds in a moment, lets just get changing the coil and filling the tank done first.

How To Change The Coil On the Uwell Valyrian II

This is quite easy, you don’t even need to completely empty the tank to do this either.

You can safely change the coil even with half a tank of juice, just keep the top part upside down. That’s it, now these coils are big, with a lot of cotton so you should wait at least 5 minutes before you start vaping.

You will see the juice level drop slightly as the coil soaks it up for the first time.

Read more: Why you should prime your coils

How to fill the Uwell Valyrian II tank

The flip top cap, flimsy as it may appear, makes filling the Uwell Valyrian II so simple. Now it is worth noting that on the coils there’s a “MIN” level line, try and keep above this line to help the lifespan of your coil.

Continuous use below the line could lead to the cotton not having enough saturation and in turn killing off your coil sooner than it should.

You will notice some juice when you open the top cap, not a lot and it won’t seep out, you may want to give it a wee wipe before you close it – personally I never did. The flavour from both coils is excellent, I couldn’t really pick between them regardless of the juice used.

You do have to run them at the recommended wattage though, more on that later.

I’m not going to score each one individually because to be honest, these coils hit all flavour profiles, nothing differentiated against the flavour.

Although, that first vape, maybe the tank has been sitting for an hour before you get out for a vape break.

The cotton has been sitting saturating for that hour.

That first vape, how can I explain this, the flavour, it was just heavenly.

We are talking 10 out of 10 territory for all flavours.

Let me put it this way, you have just got home from a long hard day at work, you get your boots off and fall back into your favourite chair and let out an almighty awwwwwwwww.

That my friends is the first vape from this tank.

However, after that jaw dropping vape, the flavour does drop a bit, not much but its not quite orgasmic again…….until it sits to saturate again then HELLO.

Unfortunately I cannot score the flavour from a single vape every hour, so it does drop a point, maybe 1.5 after that, which is still good flavour.

The flavour whilst chain vaping, excluding that first vape, is pretty consistent, ten pulls straight after each other kept the flavour going and no signs of dry hitting, the cotton wicking does keep up.

First off, the recommended wattage may scare some a bit, those that don’t go over 70 watts.

These coils need that extra power, I did try running both at 65 – 70w but the flavour wasn’t there and cloud production was poor.

At the recommended wattage, flavour and clouds increased dramatically.

So, I have been using this now for two weeks, I started off the first week with the pre-installed .32 single mesh, it’s preinstalled, why wouldn’t you?

There is still life in that first coil, hard to estimate, but I would take a guess at another week or so, depending on your juice.

I had no drop in performance or flavour after running at a consistent 100w. The second coil, the 0.14ohm dual mesh coil went through the same test with juice and pretty much the same level of usage.

Honestly, if I get a couple more days out of it I think that will be it.

A hint of burnt taste is starting to creep in, now its not terrible but it is definitely on its way out. I touched on this earlier, apart from the whistling when the airflow holes are wide open, this is pretty bang on, fully adjustable so you can get it as open or restrictive as you like.

For both of the coils that were tested, I’m actually pretty impressed with the juice consumption.

6ml or not, I was expecting to be filling this every 15 minutes.

I was getting just over two 15 minutes vape breaks in work before I was having to refill.

Now I do chain like Thomas the Tank Engine when I’m on a break, so this in my book is actually very good.

Like an episode of Stephen Kings The Mist, you’ll have a room hot-boxed in no time with thick dense clouds.

Outside in a nice crisp autumn day, those clouds will linger around, love it.

I had the car hot-boxed in two vapes, no I was not driving at the time I was parked up.

And neither should you be producing big clouds while driving with closed windows, there ends the health and safety briefing.

Ok, so what’s my final verdict on the Uwell Valyrian II tank?

Quite frankly, if you are a stock coil vaper, get one.

If you are more into your RBAs, get one anyway, handy to have in case you’re not feeling up to building that deck.

The flavour and cloud production are great and I will be keeping this one close by at all times.

Unless I’m right about the flip top and it flies off never to be seen again.

Don’t be letting the recommended wattage scare you off, even at the top end the vape is cool and of course you can always close up that airflow if you want it warmed up a little.

This does mean though, no single battery mods.

Oh you can put it on them, it will fit quite a few without overhang but that wattage WILL drain your battery very quick, at which point you will not be anywhere near that recommended wattage which will affect the flavour and cloud production.

There isn’t a lot of stock coil tanks out there that won’t wolf whistle at you every time you use it wide open, so don’t let this put you off.

Have you used the Uwell Valyrian II tank?

Let us know your thoughts in the comments below.