Vaporesso understand nicotine addiction. With the Vaporesso GEN 200 kit review we’ll find out if they live up to that understanding. It’s their belief that taste concentration, ease of use, safety and ergonomics all act as catalysts for quitting the deadly weed. We reviewed the original Vaporesso GEN back at the tail end of 2019. The Axon chip was behind 220W of power being pumped to the QF mesh coils residing in the SKRR tank.

A ‘mini me’ version appeared almost a year later in the form of the Vaporesso GEN Nano. Relying on an integrated 2000mAh battery, it used the GTX 22 tank and associated GTX mesh coils.

Not long after, pulse mode was incorporated into the Axon chip for the release of the GEN S. Once again dual 18650 batteries were required to make the most of the 220W on offer. The NRG-S tank was new to the kit and so were its GT mesh coils.

There was a noticeable change of aesthetics with the Vaporesso Gen X. It used aircraft grade aluminium to keep the weight down. This distinctive box mod carried a 172 degree arc to improve ergonomics while the NRG-S tank continued chucking out the clouds.

Vapers were never spoilt for choice when it came to the GT range of coils.

What Can We Expect From The Vaporesso GEN 200 Kit?

Vaporesso have taken the same approach as their recent Target kits. By releasing a 100W version alongside a more powerful 220W edition. 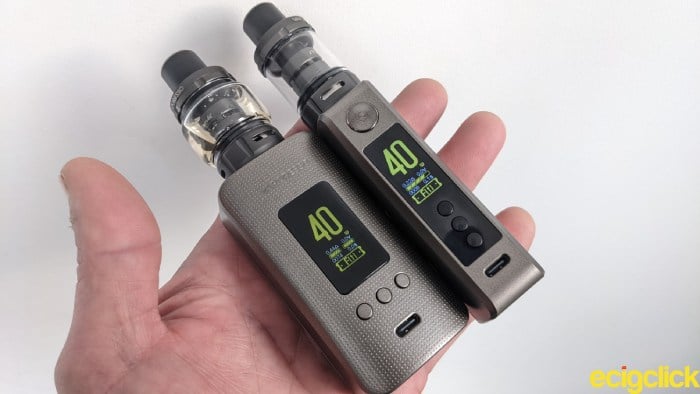 Whereas the Target 80 used an integrated 3000mAh battery, the GEN 80 S relies on a single 18650 battery. I’m not sure why Vaporesso did this and highly doubt it affects the performance or weight of the device.

Yet ‘Ultra light’ is the phrase used to describe the Gen 200. We’ll find out in due course.

Other than a few aesthetical changes there doesn’t seem to be much separating the new GEN devices from the current Target series. They both make use of the iTank, use the very same GTi coils and have the same display. Only the material used and button configuration seem to have altered.

This would have been an ideal time to include the 0.15ohm mesh coil that I’m informed is due.

I must admit it was a bugger sliding the sleeve off this bad boy. The carton suffers from more trapped air than I do! Patience should be a virtue at my age but I’m still prone to a few hissy fits.. lol

So it was nice to see a protective foam covering the glass of the iTank. Pity that wasn’t extended to the spare glass. Just Sayin’, Vaporesso.. As with the Vaporesso Target 100/220W models I haven’t received the instruction manual. So I’ll be picking out features as the review develops. At the time of writing the device isn’t even featured on the official web site.

Therefore it’s important to note this is actually an early review model.

Fortunately I’ve received the 0.4ohm GTi mesh coil (sorely absent from the Target 100/220W kit reviews) so I’ll be able to give my thoughts on that today.

Check out my review of the Vaporesso Target 100 kit if you’re interested in what I made of the GTi 0.2ohm mesh coil.

At the base of the iTank are three 10mm cycloptic airflow slots. All three are fully adjustable and have buttery smooth turning tolerances. Heavy vertical knurling around the perimeter helps in making fine adjustments.

It also assists with unscrewing the deck (clockwise) to remove or replace the plug and play GTi mesh coils. 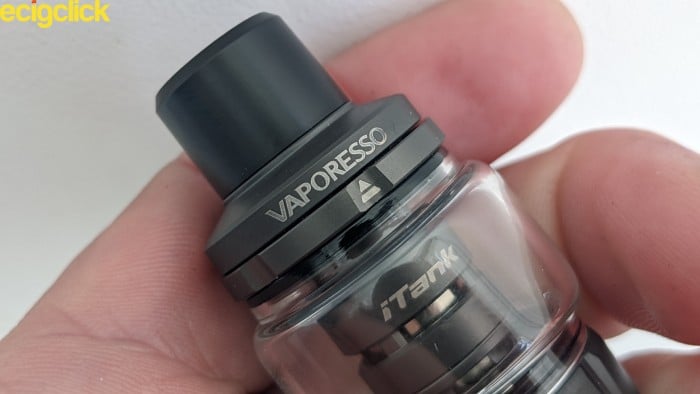 The 510 drip tip has a 10mm wide bore and is also removable. It doesn’t include O rings and there are none in the catch cup either.

You’ll still be able to replace it with others of your own choice.

Swing the top cap round by pressing on the arrow marking. This will expose the silicone gasket of the fill port which has a width of around 10mm. It’s a shame the cap doesn’t swing round further because it limits the effectiveness of filling with certain wider bottles.

Although the top cap pushes securely back into place it doesn’t lock. So in this respect it’s not 100% childproof.

When Vaporesso state the Gen 200 Mod is ultra light, they mean it! It’s actually almost feather light. So we know we’re dealing with a toughened plastic/aluminium alloy material. With the battery door removed it’s possible to bend the Mod – with a degree of force. From an aesthetical point of view I find the Mod very pleasing. It takes a simple, no nonsense approach with a dot matrix pattern engulfing the front and rear. The top, bottom and sides have a smooth colour co-ordinated spray coat finish.

It feels extremely comfortable in the hand too. The side firing button is perfectly placed. 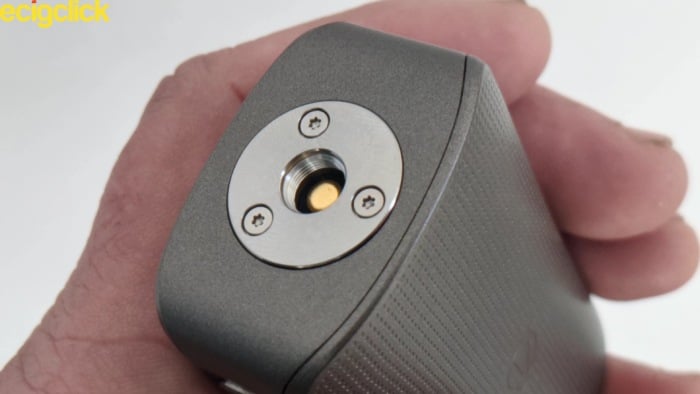 Since the main TFT colour screen is situated centrally on the front it makes perfect sense to have a centre mounted 510 connector. This gives rise to the possibility of switching between tank sizes of 24mm – 28mm. 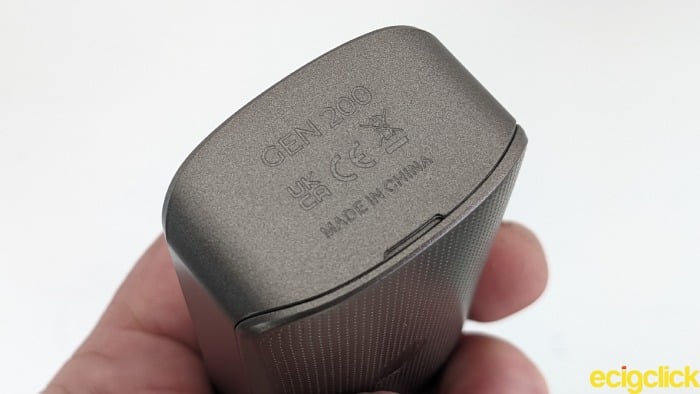 Although there’s contouring around the edges of the base, the Mod behaves itself on any surface. The type C USB port is sensibly placed, providing adequate stability while charging. The battery door is solidly built and doesn’t bend under any applied force. It’s designed to fit one way and lines up with the magnets on the inside of the Mod.

A finger nail cut out is built into the base but I found it easier to just pinch the sides of the door to remove it.

The two 18650 batteries fit easily enough. There’s enough space to work them using the spring loaded contacts but Vaporesso still need to up their game here.

Where’s the battery removal ribbon? Let’s hope this gets rectified before an official release.

Vaporesso Gen 200 Kit – How To Operate

Despite the name, it actually fires up to a maximum of 220W.

NB: Even when the device is locked it’s still possible to vape.

In DIY mode it’s possible to alter wattage for a S(oft), N(ormal) or H(ard) initial vape.

When in system settings, turn smart variable wattage on. The Axon chip will automatically detect the best output for the installed coil.

That’s it! As previously stated there’s nothing new in the way of menu functionality with the Vaporesso Gen 200 mod.

This isn’t official so please don’t quote me on this but I must assume the usual safety features have been incorporated into the board. These will include short circuit, low and high resistance, low voltage and vape cut off protections.

If your device suffers from any of these issues, stop using it immediately and resolve the problem before continuing to vape.

Comparing The Vaporesso Gen 200 With The Gen 80 S

As you can imagine, the Gen 80 S is even lighter than its bigger Bro. It’s 25.5mm wide in comparison and you won’t be fitting any wider tanks than the included iTank without serious overhang.

The battery door works the same way, relying on two strong magnets and can be snapped into place either way round. 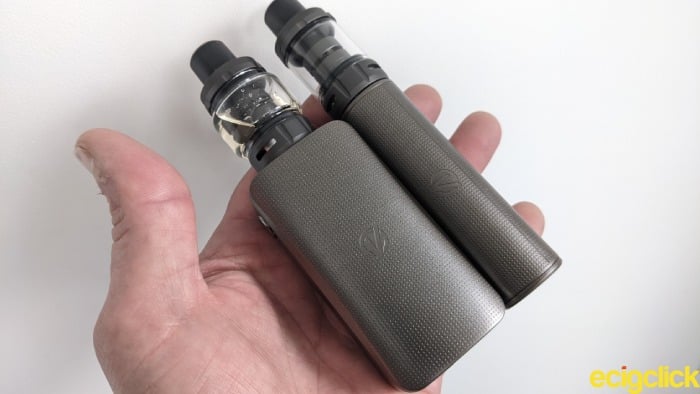 The display is identical (if anything a little brighter) and the menu and mode buttons are now vertically mounted. The dot matrix pattern has been confined to the battery door. All other areas of the mod have a spray coat finish.

Functionality remains the same. All three modes are included as well as bypass and smart mode.

Aside from the obvious aesthetics the only difference I could discern was with the Axon chip itself. It runs version 0.20 while the Gen 200 has 0.30 on board. 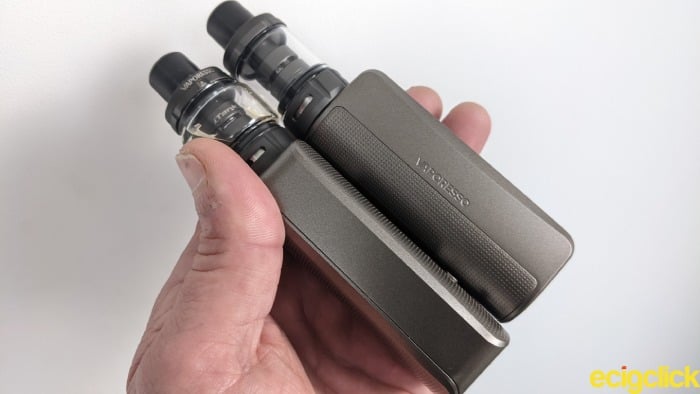 Vaporesso Gen 200 Kit – How Does It Perform?

A very smooth and turbulent free inhale preceded layer upon layer of vapour production. There was absolutely nothing to fault in this respect but the apparent limitations of the mesh soon presented themselves.

At 60W the coil produced little if any warmth. Consequently the most I tasted was a flat monotone vanilla experience. It was definitely what you’d call a mellow vape. It certainly lacked any richness, extra flavour tones or back notes. 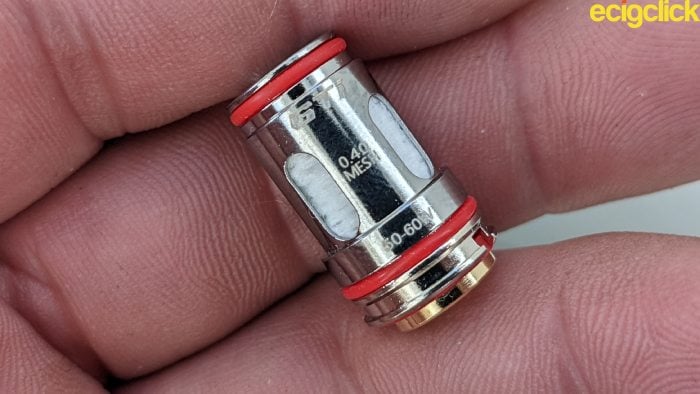 With a fresh set of 18650 batteries installed the Gen 200 pumped out an initial 5.3V before swiftly dropping to 4.8V. This initial burst meant Pulse mode was able to lift the flavour and bring out more creamy goodness.

Yet vape on vape there still appeared to be a lack of warmth behind the inhale.

The custard still reacted in a very timid manner most noticeably found around the edges of the exhale. The consistent nature of pulsing meant that each vape was as good as the previous. I was able to chain vape without any fear of dry hitting either. F(t) mode without doubt provides the best vaping experience – clearly knocking out extra clout at the start of the inhale. Now I could feel more warmth and the coil was responding readily to expectations.

The flavour was superior to that of pulse mode and quite honestly left wattage mode in the dust. Such was the difference to the flavour quality of the vape. The custard jumped to the surface while dairy notes popped to the tune of a more realistic vanilla essence.

A steady 5.3V was being held throughout the inhale while using fresh 18650 batteries. Ramp up time was non-existent and power to the coil seemed instant.

Yes. I was left with no uncertainty that F(t) was the best and possibly only vape mode to use with the Vaporesso Gen 200.

The big question is are we being offered anything new with the Vaporesso Gen 200 kit?

Definitely not in terms of functionality. It’s the Axon chip and all the familiar modes that come with it.

The device still succeeds however. Returning to the opening question, Vaporesso clearly do have a grip on what vapers expect.

They’ve nailed the Gen 200 kit in terms of ergonomics and ease of use. The mod is incredibly lightweight even with two batteries installed. It’s the one single feature that impressed me the most.

I never encountered any safety issues. I will assume the chip has all bases covered in that respect.

However, there’s no getting around the fact that the Vaporesso Gen 200 kit is merely a reconstruction based on previous releases.

The iTank isn’t new to the kit and neither are the GTi coils.

It’s aimed at the progressive vaper. Someone already familiar with sub ohm stock coils and looking to try mesh (and possibly plug and play) for the first time. It’s for the vaper that takes portability for granted or for those who demand ease of use – either with the tank or menu settings.

Finally, do Vaporesso have a grip on taste concentration? I ran fruit, beverage and menthol flavours through the solidly built and user fill friendly iTank and they performed more than adequately.

But that firm grip loosens when handling the added heat demands of profiles such as dessert or bakery. While F(t) mode did improve matters, there seem to be clear limitations with the GTi mesh coils, in my opinion.

..Who knows? Maybe Vaporesso will include the announced 0.15ohm mesh coil with the final release. If I ever get my hands on it, I’ll give you my thoughts.