VGOD have been around the vaping scene for a while, their brand clearly embracing (and sponsoring) cloud chasing and vape tricks.

As well as a line of E-Liquids and merchandise they have been producing hardware with the aim of fitting that niche of the market.

The VGod Tricktank is their attempt at a pre-built sub-ohm tank, alongside their RDTA and mods, to cater to the vape trickster without using an RDA.

To do this they have teamed up with CoilArt who started business producing higher performance coils for existing sub-ohm tanks.

So have VGod produced a tank capable of supporting the vape trick community?

The packaging is a normal box affair, much simpler and understated than some of the packaging we see from other manufacturers. On the rear we find the usual marketing blurb along with contents list, obligatory warnings and authenticity scratch panel.

Inside we find the following:

There are no other spares such as seals/O-rings included.

The tank is made from an unspecified stainless steel, with a Delrin mouthpiece top and Pyrex tank glass. The body is 24mm wide and 30mm high to the base of the mouthpiece.

The Delrin mouthpiece/shield is removable and both it and the stainless cap beneath will accept a standard 510 drip tip.

The top cap unscrews to permit refilling in the style of the Aspire Cleito and others, meaning that there is no frame holding the glass in place, simply friction between the glass and the base silicone seal. The bottom bears the VGod Logo engraving with TrickLyfe slogan along with the US Flag.

The 510 centre pin is gold plated but non-adjustable and does not stand particularly proud of the thread which may be a safety concern if used on a hybrid style mod. How Does The VGod Trictank Perform?

The 3ml tank is easy to fill although the threads were initially a little tight, as was the seal to remove the glass to change the coil.

The latter is probably a good thing bearing in mind this is the only thing holding that in place.

What you do need to bear in mind when refilling is to block the airflow and as you perform the final few turns to secure the top invert the device to prevent juice leakage.

Not a particularly easy task. Changing the coils requires removal of the glass, the seal for which is quite tight and took some effort to remove.

When re-fitting the glass you need to take care not to damage the seal as there’s no spare.

When re-fitting the coils you’ll need to make sure that they’re screwed down tightly enough to prevent them coming unscrewed at filling and dumping juice through the air vents.

Juicing Up The Coils

Juiced up I started both coils at 30W, which unsurprisingly for such a wide airflow and high power tank produced little in the way of clouds or flavour. The airflow is a bit noisy so this isn’t one to use if you’re watching a movie.

At 45W flavour and vapour begin to kick in, however at 55W things definitely improve, the vape a little warmer but certainly more satisfying.

Despite the wide-open flow the flavour is pretty good, with the CoilArt coils playing no small part in this.

However, as is common with wide vertical coils there is some mild spitting which does increase a little as we creep up the wattage’s.

However, there is a caveat to this. At higher wattages you’re using a LOT of juice, and wicking takes time.

For that reason, VGOD & CoilArt recommend that you do not draw for more than 5 seconds and that you let the device rest between vapes to prevent dry hits and burning.

Pushing the envelope a little, I took the 0.5 Ohm coil up to 100W and following the instructions regarding wicking found no issues. The vape was warmer, approaching hot and the vape was dense.

The 0.2Ohm coil made it up to 130W. This is pretty impressive given the wicking limitations and dimensions of the tank.

That said you wouldn’t want to stay at that wattage for long as the tank empties pretty quickly and you do lose some flavour.

The body of the tank didn’t get particularly hot in use, and unlike many RDTA/RDA devices there was little condensation visible around the base.

First, the VGod Tricktank is a capable prebuilt coil tank, performs well for its size and generates good quantities of vapour, it wouldn’t make a bad backup for an avid vaper.

However, the device has its flaws. As with the SMY TC 75 mini kit and many other Cleito styled tanks, the design itself does not lend itself to leak or stress free use.

As the seals wear the chances of dislodging the glass at filling increase and the coils can become unscrewed when opening. Given the criticality of that base seal I’m very surprised to see no spare in the box as it’s not a standard O-ring.

No air flow control limits the options for the tank, it’s clouds or nothing. It also means that refilling becomes more difficult than it needs to be.

The mouthpiece/heat-shield works fine, it’s just a shame that if you remove it you’re left with that awkward O-ring adorned tube which looks stupid, as does another drip tip stuck into the top of the mouthpiece.

Those aren’t the killer however.

The price of the tank puts it very close to things like the GeekVape Eagle TopFlow, the Steamcrave RDTA (which also has prebuilt coils available) and others.

It’s also not miles from the price of a lot of RDTAs.

In short, it’s a good sub ohm tank but there are some kinks and far too much marketing spin.

Yes, it’s good but it’s not going to beat a good RDA or RDTA. 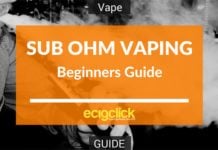