Today we are looking at the Vsavi CBD vape kit and CBD vape juice. Given the relatively high cost of CBD oils and e-liquids in general I was more than a little interested in checking out what the company calls a ‘no frills’ kit.

The company in question is Pure E-Liquids and for this budget CBD kit they’ve teamed up with e-cigarette manufacturers V2.

To look at the kit is very much a budget set-up but how does it vape and more importantly how effective is the CBD oil?

But first a disclaimer of sorts.

I have been fortunate enough to review a number of the best CBD vape juice and kits.

Whilst science is at an impasse on the effects CBD has on certain conditions – illnesses and symptoms – anecdotal evidence suggests it certainly helps in very many cases. CBD is short for Cannabidiol and yes it derives from the cannabis/marijuana plant.

However the chemical that gives a user the so called ‘high’ is removed leaving only the alleged beneficial ingredient in this case the CBD.

In its purest form it is odourless and in this particular case it is also tasteless.

Actually you don’t get a box – well at least I didn’t.

My kit came loose in a padded envelope which I guess cuts down on the cost. This kit is extremely simple to use and is pretty ‘old school’.

What I mean by that is we’re looking at your extremely basic ego style pen with a ‘string’ wicked clearomizer – which the company calls the V2 Ex-Blanks.

A look at the website shows the battery and tank as well as the USB charger are from the V2 basic starter kit – minus the box.

V2 says the tank can only be re-filled for up to 15 times before needing to be replaced and can be bought in a 3 pack from the website.

The 380 mAh 4.2v pen or battery comes in x2 sizes standard or long and you can choose from black – white – blue and stainless steel.

We’ve covered the alleged effects of CBD via vaping many times before.

But as a quick recap CBD is derived from the cannabis plant.

However unlike marijuana the user does not get a ‘high’ as the psychotropic element is removed during the manufacturing process.

Whilst no scientific documents exist proving CBD can help reduce the symptoms and treat various mental and physical illnesses there’s plenty of anecdotal evidence to support the claims.

The VSAVI CBD oil is available in x3 strengths 50mg – 100mg and 200mg suspended in a 10ml bottle of odorless – tasteless e-liquid.

V2 says this is the purest form of CBD oil you can find as is produced from carefully selected organic plants from farms in Solvenia and Croatia.

The oil is extracted in clean laboratory conditions and is fully TPD compliant.

Given the CBD oil is pretty much tasteless and certainly odorless V2 says users can add a tiny amount of flavoured e-liquid if required.

However they stress ‘a couple of drops’ and say that too much could result in the mixture becoming crystalized.

Should this happen the crystals can be dissolved by warming the tank up by running under a warm tap for instance.

As I’ve already mentioned the vape kit is extremely easy to use and extremely ‘old school’ in its design. The battery seems solid enough and the tip lights up red when you inhale – there’s no buttons btw, this is an automatic e cig, just charge and vape.

The wick is a kind of cord that hangs from the atomizer into the liquid. Which in turn soacks and feeds the coil.

I have the white version and whilst it’s nothing remarkable to look at it is fit for purpose. If you’ve ever used a so called ‘cig-a-like’ or vape pen style device then you’ll be familiar with this one.

The battery is charged via the USB charger and is then screwed onto the tank so there’s no pass through vaping [vaping whilst charging].

How To Fill The V2 EX Blank Tank

The tank is filled by:

To vape you need to have the battery charged and simply inhale – no buttons to press.

Once charged – filled and connected it actually looks like a thermometer – clinical but in a good way.

How Does the CBD Vape Kit Perform?

As a kit it performs surprisingly well with no wicking issues whatsoever – they’ve kept it simple and it works.

I didn’t hold out much hope at first – the tank made me chuckle as it is extremely dated to look at BUT it performs extremely (and I mean extremely) well.

Despite being tasteless and odourless I got a nice kick at the back of the throat and it was a very pleasant vaping experience.

This isn’t a device to help you quit cigarettes, it’s a CBD kit. You’ll be buying it in the hope the anecdotal evidence of its help with a variety of conditions will suit you.

So you’re not going to be winning any cloud chucking competitions – or expecting a great taste when used ‘neat’ – and don’t forget it’s nicotine free.

What I can say is the filling is tricky and fiddly to say the least.

As you can see the filling hole is tiny and there’s barely any room between the central stem and sides of the tank and with such a large pipette you need to be careful!

I did add a couple of drops of a zero percent nicotine flavoured e-liquid as suggested by the company and to be honest it didn’t really work as in the taste was muted to say the least.

Fully charged I was able to use this for a day and a half before it needed re-charging.

But remember this is not a piece of kit you chain vape or use all day.

I’m not a medical practitioner and there’s no scientific consensus about the benefits of CBD oil.

However, I can only go from personal experience as to how I found using the 100mg VSAVI CBD oil.

Regular readers will know I have a variety of mental health issues one of which can be extreme anxiety and I have used CBD in the past to help alleviate the symptoms.

It’s not been a good couple of weeks if I’m honest and my anxiety attacks have been regular and included physical symptoms of rapid heartbeat – sweats – palpitations – headaches – night terrors – stomach cramps – shaking to name but a few.

Given these ‘attacks’ have been at the higher end of what I’m used to I can only say that they had, for the first week at least, been too extreme (I believe) for anything to help.

However, I can say that after 4 days of using the 100mg VSAVI CBD oil my symptoms, whilst still there, certainly dimmed a little and I was able to relax a touch.

That could be the natural course of things or the CBD or the so called placebo effect – like I say I’m not a doctor – however given my size I’m pretty sure I’d have been better at the 200mg strength.

If you want to try CBD then do your research. You can read our CBD guide here.

Given the size of the pipette and the tiny filling hole you need to be extremely careful when filling.

I don’t want to describe this kit as ‘cheap and cheerful’ because that lessens exactly what it is somewhat.

But you can’t get away from the fact that its price point is very good value given the average cost of a bottle of CBD oil – flavoured or unflavoured.

Apart from the fiddly filling it’s intuitive and simple to use and that’s no bad thing. 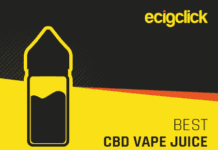