The Wotofo Gear V2 RTA is an update to the super popular OFRF Gear RTA.

We didn’t actually review the original Gear RTA but it was hugely popular. In fact Wotofo bought out the OFRF company and carried on producing devices with the NEXMesh technology including the NexMesh Pro Tank, NexMesh Sub Ohm Tank and even included this in the Profile 1.5 RDA.

What To Expect From The Wotofo Gear V2 RTA?

For a start the styling is totally different, in fact to me the PCTG plastic top to this reminds me of a pod tank!

However it is still a fully fledged RBA with a single wire coil deck and a German PEEK insulator. 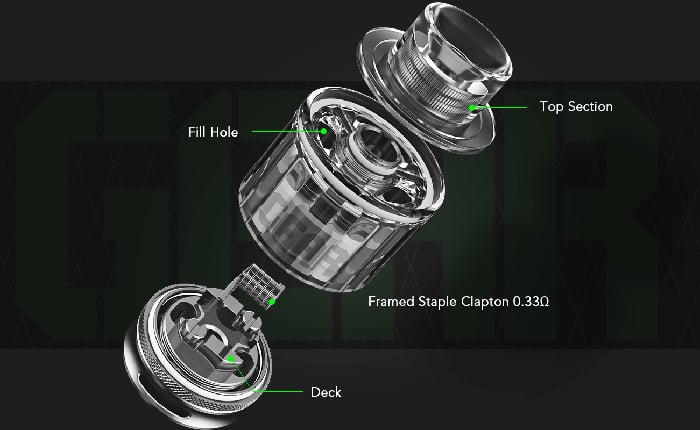 The deck has 2 pan head screws to secure the coil in position and the chamber has been enlarged to increase the working area on the deck.

A strange thing is the fact that you cannot adjust the airflow? The inlet is on the base and is non adjustable? Wotofo say this is the optimal airflow setting so should not need adjustment and eliminates the chance of leakage through the airflow.

The top cap is all one piece with a moulded in drip tip – apparently to shorten the passage of vapour from the coil to your mouth.

You remove the top cap to refill with up to 3.5ml (Standard) or 2ml (TPD) of your own e-liquid.

There are 6 colours to choose from: Black, Gunmetal, SS, Blue, Gold and Rainbow. Personally I am not keen on the styling of this – but if it performs as well as the original I am sure many people could overlook that!

Let me know what you think of the Wotofo Gear V2 RTA in the comments below!