In for review today is the ZOVOO DragBar 600S Disposable E-Cig range. Only a few months back I took a look at the ZOVOO DragBar 600. I described the performance as faultless, offering strong and concentrated flavours.

Now ZOVOO have returned with an upgrade that looks aimed towards trendy, flashy party goers. We’ll find out why shortly.

It’s been a busy year so far for ZOVOO. Not long after launching they were highly praised for their efforts within the industry. Very recently they went one step further by winning the ‘best newcomer’ category at the Vapouround awards.

This was achieved by showing innovation, an upgraded atomisation technology as well as good brand reputation.

Talk about hitting the ground running! Or vaping, in this case..

That’s also demonstrated by the number of DragBar versions already out there. So let’s take a look at this latest one.

What Can We Expect From The ZOVOO DragBar 600S?

When auto drawing on the DragBar 600S the bottom half emits six colourful, flashing rhythmic lights. For once I’m lost for words..

Here is an introduction video from the ZOVOO YouTube channel showing the lights in action!

This is why ZOVOO describe the disposable as a ‘party must have’. Hopefully the kitchen won’t be out of bounds, either! lol

On the underside there’s a series of five airflow holes in the shape of a flower. These are designed to provide a more comfortable inhale as well as balancing the flavour. The Poly Carbon (PC) mouthpiece is contoured to provide additional comfort when vaping and has an opening of around 5mm for that MTL vape. There’s a total of 20 flavours to choose from in the range from drinks, tobacco, fruits and menthol. There should be something there to cater for most vapers needs.

The ZOVOO DragBar 600S is available in single pack form, vacuum sealed and with a user manual. It can also be obtained in a multi pack of ten. The disposable is catering for the TPD market although curiously there’s mention of a 50mg version on the official site. 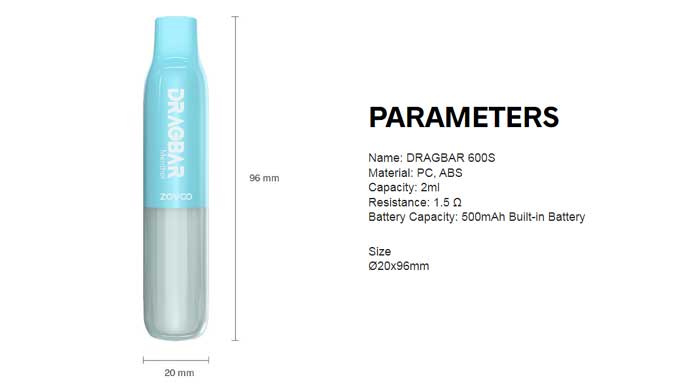 Capturing deliciously creamy notes of Banana that provides a sweet and satisfying taste paired with ice to create a refreshing icy exhale.

The icy inhale with Banana Ice isn’t too strong but it does have a nice cold effect on the back of the throat. It’s balanced quite nicely to give the effect of drinking a cold Banana milkshake.

The Banana itself has a nice fresh, ripe appeal and persists throughout the entire exhale. There are quite a few sour notes but they’re underscored by a sensible level of sweetness.

That sweetness tickles the tongue and taste buds to keep the vape uplifting and lively.

As the description suggests, there is a creamy texture to the fruit, almost milky and that’s why Banana ice comes across as those popular drinks.

It’s a very smooth vape, too. This one is packed with flavour and a few delicate sub notes to boot. Capturing deliciously juicy notes of white Grapes that provides a sweet and delightful taste paired with ice to create a refreshing icy yet fruity exhale.

A fragrant, floral aroma drifts from the mouthpiece once the sealed bag is torn open.

..but that’s about it. I clearly received a duff disposable. For this reason Grape Ice can’t be included in the overall score. Capturing deliciously juicy notes of Watermelons that provides a sweet and satisfying taste paired with ice to create a refreshing icy exhale.

A sharp icy blast caught the rear of the throat during inhale, throwing me off guard for the first few vapes. It didn’t take long to acclimatise thanks to significant levels of sweetness following it on the way out.

The Watermelon is richer in tone than others I’ve tasted in disposable form. The flavour is more condensed and concentrated. This helps to make it a little different. I’ve tried the Jubilee variety of Watermelon and it’s similar in taste.

It has an earthy quality with just a touch of sourness attached.

However, it’s easy to get hung up by the extreme level of sweetness. It sits on the tongue together with an unwanted wet taste that refuses to budge.

Personally I would have preferred less sweetness and more Watermelon because the fruit content is extremely flavoursome and quite realistic. 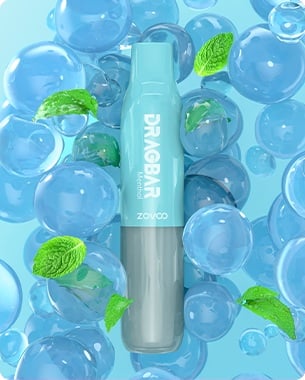 Capturing crisp menthol notes with minty highlights that provide a cool satisfying taste with an icy kick on the exhale to create a refreshing all day vape.

Menthol Ice is quite clever. The Menthol comes across as being separate from the rest of the flavour on offer.

It seems to carve its own niche during the exhale, running alongside what appears to be a fresh mint in the back ground. The cooling effect takes time to build on the inhale and the longer you take, the more effective the icy blast is on the way out.

Yes, it will cut into the throat and that’s to be expected but some may not like the way it has a burning effect. That could make Menthol Ice a little off putting.

I think Menthol Ice has been put together very well indeed. If you’re after a summer cooler or even a palate cleanser, it’s definitely one to consider. Capturing delicate juicy notes of Peach that provides a sweet and delightful taste paired with ice to create a refreshing icy yet fruity exhale.

Peach Ice definitely has its fair share of floral notes. There’s still an abundance of sweetener here but thankfully doesn’t seem to be jostling for attention above the fruit.

In turn this creates a much more balanced flavour. I was expecting Peach Ice to be generic tasting. I’ve been pleasantly surprised! That’s not to say it wins any award for complexities.

It lacks the acidity associated with Peach yet still comes across as ripe and juicy. Bitter qualities are absent but a few sour back notes float around during the exhale.

Does the cooling inhale contribute? Pah! I think it could’ve been toned down but once again it’s likely to appeal if you’re into icy cold vapes.

What it comes down to is the end product, the flavour description. It certainly lives up to that.

Combined with an authentic tasting fruit it does what it says on the package.

I got a very smooth and effective MTL vape from the range. The restriction must’ve been set well because at no time was I tempted to restrictive DL from the disposables.

Flavour quality was very good and relatively authentic to the fruits included. The cooling properties never overwhelmed the vape experience but at times the level of sweetness was higher than I’d have liked.

Vapour production was fine. It’s what you’d expect from a disposable e-cig running a 500mAh battery although I did expect more from the flower shaped airflow structure.

In my estimation the battery actually over performed. When based on the knowledge I vape around 100 puffs an hour, a total of 7.5 hrs from the ZOVOO DragBar 600S represents very good value.

On to those flashy lights. They’re not really for me but I guess they’ll have their appeal to a younger, outgoing audience. I found them a distraction and was constantly in the belief the battery was failing. Many vape kits flash in a similar way, after all.

When the battery fully depletes, those lights simply fail to function. Around five minutes before this vapour production begins to wane.

I can’t say there was much degradation of flavour though. It held up well to the very last puff.

The ZOVOO DragBar 600S continues where the 600 left off. It hasn’t improved on what are already great flavours but it’ll certainly get you into a few more parties!