The Augvape Intake Dual RTA is once again a collaboration with prolific vape designer and huge US YouTube reviewer Mike Vapes and is designed for sub-ohm vaping.

The original Intake RTA was, on the whole, very well received – however I did find it a little too restricted for my vaping tastes – as to if things have loosened up we shall see in this review.

I’ve worked closely with Augvape for quite some time now and the majority of the time really enjoy and rate their products highly.

The recently reviewed Augvape Merlin Nano RTA is I believe, one of the vape releases of the year, the Augvape AIO kit was a decent vape, whilst the collaboration with VapnFagan resulting in the awesome BTFC RDA is still my go to dripper.

The company makes pretty decent mods too with the standout and stunning Druga Foxy, the petrol head’s favourites, the V200 and follow-up VTEC 1.8 all extremely well received.

So a great track record to follow and as to if the Intake Dual RTA has improved we shall see.

What Can We Expect From the Augvape Intake Dual RTA?

From a personal point of view I’m hoping for a much looser vape – the original really was a little too tight for me.

Obviously it now has dual coils – though it can take larger single coils – given everything is much bigger with the new version 26mm from the original’s 24mm.

E-liquid capacity has increased significantly with out of the box 4.2ml jumping to 5.8ml with the bubble glass extension.

OK scene set, let’s get down to business.

For the record this was sent to me free of charge for the purpose of this review direct from Augvape – thank you – and as always my thoughts and opinions are my own. A box is a box and inside you’ll find: Please note it’s unclear at the time of writing if there’s a 2ml EU TPD version on the market – some sites say there is – whilst most don’t mention it [even the Augvape official website] – any info I’ll update!

The Augvape Intake Dual RTA is a whole lot bigger in more ways than one than the original.

The size has increased to 26mm and the capacity has really bumped up to a whopping 5.8ml with the bubble glass on.

Little wonder given this one obviously takes x2 coils and to cope with the extra power going through the tank, the airflow ports have also widened. The RTA has retained its shape and design and thankfully they’ve removed that awful blue drip-tip popping on a plain black which looks a lot like the one off the Wotofo Recurve RDA.

The coils are held in place by hex screws – which I’ll come to shortly – and the deck has had a major change too.

Gone are those hollow intake tubes sucking in the airflow and instead have been replaced by x2 hollow arms – similar to the original Zeus style.

As to if this tinkering has lessened the extremely restricted lung hit of the original – we shall see.

Available colours are: Black – Gun Metal – Stainless Steel and the Rainbow which as you can see I received.

The larger size means for my eye the Intake Dual looks tidier – I felt the previous one came over as more than a little squashed and clunky.

Especially the V shaped indentations/knurling which created a rather annoying haphazard look when assembled – they’ve calmed down on the number of those Vs as well.

It looks OK with the huge bubble glass on too – again something the original lacked from a design point of view. The straight glass really does add to the look, giving a sleek and uncrowded design that sits nicely on any mod I’ve tried. The Intake Dual logo is on one side the barrel and is subdued so not at all in your face – once again giving it a much cleaner look.

The deck however whilst clean can – OK is – a little fiddly – for me anyway.

Despite being 26mm – the deck is a little crowded even with those hollow airflow arms. The post holes are recessed and I mean deeply – meaning unless you have a box full of hex screwdrivers to get the right fit – you’ll need to use the included tool which is extremely thin making it a pain to tighten. Given those hex screws are also tiny – I found it tricky to get the tip to bite – as to if they’ll strip time will tell, there are spares in the box.

Build wise this is an Augvape RTA and in general they use top of the range materials and have very good machining and the Augvape Dual RTA is no different.

All the moving parts came apart nicely with little if any crunching out of the box. Now in full use the threads whilst not as smooth as butter are very good indeed.

How Does the Augvape Intake Dual RTA Perform?

Given I really didn’t enjoy the tightest of tight vapes off the original I was hoping things loosened up more than a little!

As to if that’s the case I’ll look at in a mo’ – but first let’s break things down.

I’ve hinted that I found it a little fiddly and I stand by that.

I used the coils that came in the box – I’m no coil expert but they seem well made. 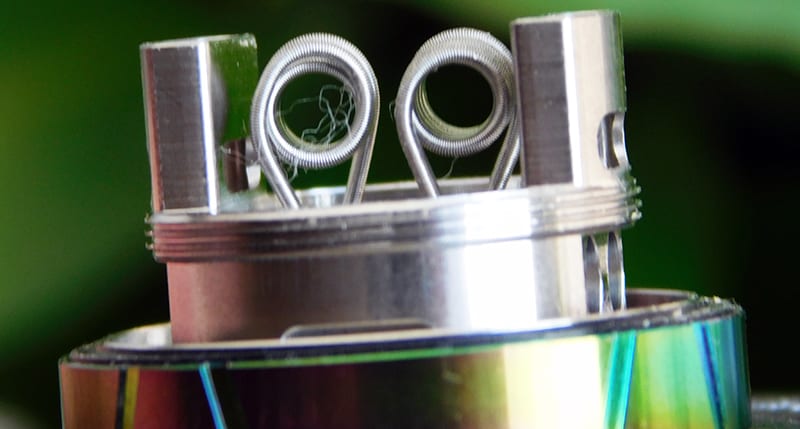 Inside the box is the ‘trimming tool’ which shows the length of the legs need to be snipped at between 5mm and 5.5mm. To keep the ‘British End Up’ I used the excellent Coily Tool – something every serious builder should own 😉

At 5.5mm I did feel the need to push the coils down a wee bit, but that will be down to personal taste.

The hex screws are, as I’ve already mentioned, fiddly to get a bite on and the hex screwdriver is very thin and I found it tricky to get a grip.

I used my hands but I do recommend dropping the legs into the post holes with a Coil Master rod – on my second build whilst still a little crowded on there it was much easier.

For the record the included coils came out at 0.12ohms and I vaped between 67 and 77 watts – more on that later.

The juice ports on the deck are once again shared and obviously wider given the overall size.

Wicking is a doddle with my old adage – less is more – the key. I snipped the cotton tails with the scissors flush against the tank which felt bang on once I stroked out a few strands.

I let the dampened cotton sit just above the juice ports and the natural weight allowed them to sit a tiny bit inside – just don’t stuff it in and you really shouldn’t get any dry hits.

So a case of a bit fiddly building but dead easy wicking – now the million dollar question – how does it vape?

For the record I vaped on the last of my Ohm Boy Cranberry, Apple & Raspberry e-liquid which is a 70/30 PG and VG blend and very tasty it is too! I began with the airflow ports wide open and the Dual is nowhere near as tight a draw as the original.

Don’t get me wrong – it’s still a restricted draw and I compared it to the awesome GeekVape Zeus X RTA with the airflow a third open.

It’s a little too tight for me if I’m honest – but passable. Again if you like lots of air then this one may not be for you.

As you can see I originally had a reasonably low build of 0.12ohms and vaped up to 77w. I found any higher than this and things began to get hot and not just through chain vaping.

Please note: the 510 pin barely and I really mean barely protrudes – so not one to pop on top of a hybrid mech mod.

Flavour and Clouds From the Augvape Intake Dual RTA

I scored the single coil version 8/10 for flavour and given this is now a dual I was hoping to eke out a bit more.

I’d pop this one in the high 8’s – so a definite improvement – but for me still not in the same league as my still go to Zeus X RTA.

As for vapour – once again given this is a dual coiler – there’s obvious improvement with much denser cloudage, though a cloud chucker this one isn’t, but there’s enough to keep cloud chasers reasonably happy.

Overall this is definitely an improvement on the original Intake RTA.

The design tweaks have certainly given it much better look – though the knurling on the top cap is still I feel a little overdone.

I was surprised just how tight the deck was to build on and how small not only the post holes are, but also the recessed screws – trust me they can be fiddly to line up with your tool.

It’s still far to restricted for my style of sub-ohm vaping and shutting the airflow right down gives you an almost MTL vape – almost.

If I was a little lukewarm on the former, I’m slightly warmer on this one.

As I keep saying it’s still a little too tight for me but the flavour has jumped – whilst not significantly – it’s certainly much better.

So are you using the Augvape Intake Dual RTA?