The Ehpro True MTL RTA is a design collaboration between Ehpro and Mark at the UK Company Naturevape.

This is designed for higher resistance coils and the MTL (Mouth to lung) vaping method. We tell you about MTL and DTL vaping styles in our guide.

So to make a tank tailored to MTL users generally the airflow is more restricted or at least more precisely controlled.

The decks can usually be smaller as the coils will be thinner and smaller diameter than some of the beasts used on Sub Ohm RDA/RTA’s.

The design brief for this tank was to create a “True MTL” tank which is solely for MTL vapers and to try and make it the best it could be.

Having a 2ml capacity (3ml with bubble glass) and 22mm diameter this is a standard size MTL tank – similar to the Vandy Vape Berserker Mini RTA and is also a single coil build deck.

There are two ways to clamp the coil either under the screw head for smaller coils or under the clamp for thicker coils.

The airflow has 5 adjustment settings – there are 5 holes ranging from 1mm to 1.8mm in diameter to provide a restricted but precise airflow control. You can choose from Black or Stainless steel versions and both come with a frosted 510 drip tip.

Thank you to Mark at Naturevape for kindly sending this for review and I will as always report back honestly on my experience with the device I have in my possession. I received the Ehpro True MTL RTA in the Stainless steel version.

It is shiny and beautiful and topped with a stunning frosted drip tip. I did try a standard 510 drip tip in and it fitted perfectly however there is a slight raised flange on the top of the tank which is visible below the drip tip so it might not look quite right with some drip tips. The deck and the top have a machined pattern which catches the light beautifully. The top cap turns to expose the filling holes and turns to close them off again.

Unscrewing the deck from the top section is peasy and the threads just have a real quality feel. The machining and quality of this little tank is incredible.

The chimney has the “True” logo etched in but it looks classy and not at all garish.

The base of the tank shows the Ehpro and Naturevape branding and the required legal logos. You get a lovely kit of goodies including 2x1ohm Ni80 Clapton coils, O-rings, Cotton, Screwdriver, Spare glass and plenty of instructions.

Here is the tank with the Bubble glass installed which was my preference. How Does the Ehpro True MTL RTA Perform?

Obviously as this is a rebuildable tank you will need to install a coil and wicking material which we tell you about below. Also filling the tank is described below.

Apart from that all you need to do is to rotate the airflow ring on the tank base to open or close the airflow as you prefer. Building is pretty simple – a lot less fiddly than I was expecting but there isn’t much spare space on the deck! I initially installed the coil with the coil pretty much touching the airflow inlet and made it central between the posts. As it is quite thin wire I held it under just the screw heads rather than under the full clamps. Once the post clamps are tightened I put a rod through the coil and lifted it up from the airflow slightly.

So I did a resistance test to just make sure nothing was shorting out – very important on these tiny little decks.

Trim the ends of the coil legs, if there are any spiky bits of wire sticking out they can be tucked under into the notch on the side of the clamp to make sure they don’t short out on the chimney barrel. Another resistance check and I did a brief pinch and pulse to clear any hot spots at 17W and got the coil glowing evenly.

I used the enclosed coil and when installed the resistance on my Uwell Nunchaku mod was showing 0.78ohm.

Wicking I used Cotton Bacon and made the cotton thick enough to pass through the coil with slight resistance but not enough to disturb or distort the coil. Add some drips of e-liquid to saturate the coil and assemble the tank and fill.

We have some more detailed guides for installing and making coils below:

This is a low power tank ideal for high Nicotine strength or Nic Salt E-liquids so I used some of my favourite Nic Salt e-liquids from the Apollo Range which are just so full of flavour for high strength nic it’s such a surprise.

These liquids are 50/50 VG/PG which should work well in this style of tank. We tell you all about VG/PG In E-liquid in our Guide.

The coils supplied in the kit are 1.0ohm Ni80 Clapton coils and these are also available to buy on their own from Naturevape/Ehpro.

When I attached the tank to my Nunchaku mod the resistance read 0.78ohms. So I first started vaping at 17W and went through the airflow settings.

The first tiny hole is really restricted and the largest hole still gives a great MTL restriction. Some might find this slightly too restricted even on the widest hole setting.

For instance I found the airflow on the Digiflavor Siren V2 with only 2 airflow holes exposed was equivalent to the Ehpro True MTL RTA on the widest airflow hole setting.

Compared to the Augvape Merlin MTL RTA this is incredibly restricted – however the Merlin to me seems to be very “airy” for a MTL tank.

At 17W the Breeze flavour Nic Salt e-liquid is bursting with crisp cool flavour and I found the widest airflow hole to be the best for me.

Even from my first vape I was over the moon – the flavour is immense it is beautiful. It tastes as clear as when I reviewed this e-liquid with the GeekVape Ammit MTL RDA.

In fact I found I didn’t even need to go higher in the wattage at all this was just absolutely spot on. Rare that the first vape on a random setting is perfect!

As for throat hit – this is as expected excellent for the liquid I am using. The Vapour was spot on too – this is not going to be a cloud chucker!

I got no dry hits, spitting or leaks either – this just works!

After several days of use – this still kicks out the same pure taste as it did the day I installed the coils – what an absolute beauty!

I loved these coils in the Berserker so much I bought a few tubs of them! They are Ni80 Superfine MTL Fused Claptons with a rough resistance of 0.7ohm.

With the coil installed and wicked the mod read the resistance as 0.51ohms.

I started off at 17W and went up to 23W and the vapour was getting a bit hot now!

The flavour just bursts out – however the taste was slightly better on the supplied coils – so I will be buying some of those I think.

I love an MTL RTA – my favourites have been the Digiflavor Siren V2 and the Vandy Vape Berserker Mini. The True RTA has thrashed both these in my opinion.

The Berserker suffered from an annoying top refill cap and the ease of refill on this True is way better. The flavour on the Siren V2 was excellent but the True is even better!

The flavour I have got from the True RTA is pretty damn close to the flavour I was getting using a MTL RDA for the same e-liquids – how rare is that!

The looks and vaping experience of this beautiful little tank have made me extremely happy and doing justice to the excellent e-liquid I have put in it!

I found the bubble glass option was my preference and I did have the airflow on the widest hole.

This is in my top 3 now with the Berserker and the Siren and I have to say the Ehpro True MTL RTA just explodes into the top spot for me.

Used this tank? Let us know what you think in the comments below. 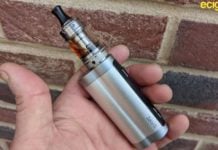