Today we are looking at the iJoy Capo Squonk Kit. A regulated squonk mod that is compatible with 18650, 20700 and 21700 batteries, as well as boasting a 9ml e-liquid capacity!

On top, it has the Combo RDA which has a triangular gold plated deck, side airflow and extremely deep juice wells! 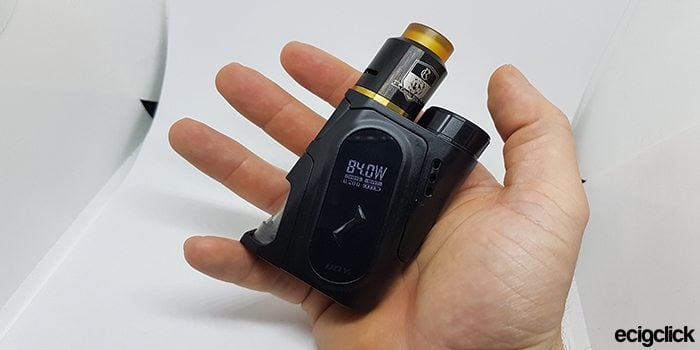 This kit was released at a similar time to the iJoy Capo 100 mod, the difference of course the 100 didn’t have squonk capabilities.

But how did I get on with this particular kit? Find out in my written and video review!

The iJoy Capo Squonker Kit is available in six different finishes ranging from your simple black and stainless steel, all the way up to a rainbow finish!

In this review we will be looking at the black on black version! At the top we have the drip tip. It is just your usual 810 size and made from ultem. It’s nicely shaped and feels great in the mouth. It attaches to the barrel via an o-ring Below that we have the barrel. A pretty simple in design. Nothing really exciting to comment about though, unfortunately. On the side it has dual cyclops airflow slots and a domed cap on the inside. Mine came with a couple of scratches inside, unfortunately. I will admit that deck does look good. Two angled posts in the centre, deep juice wells and a raised hollow squonk pin. All plated in a lovely gold finish! Surrounding the build deck, you’ve got large walls that are wrapped in two chunky o-rings. Then opposite the posts, you have two angled channels that direct the airflow straight onto your coils. At the top we have the 510 connector which has a stainless steel surround and gold hollow positive pin. And also the battery cap. This is your usual screw on type and the threads are a little rough.

The cap could also do with a bit more knurling on it as well. Underneath the cap it is clearly labelled with the negative symbol, just so you know the correct way to orientate your choice of battery. You can fit 20700s, 21700s and 18650 sized batteries into this device. The 18650 requires you to use the included silicone spacer. I’m not too fond of the space it leaves around the battery though. Below this we have the screen that is at a slight angle, and it doesn’t look out of place at all. Underneath the screen is a lightning bolt shaped + and – button to adjust your wattage.

The screen is nice and easy to read and has all the relevant information you need on there. There isn’t any Temperature Control or Power Curve options, this is just straight up variable wattage and nothing else. If we go around to the front of the device, we have the fire button. It has a nice clicky feel to it, but every so often it gets a bit crunchy and spongy. As per usual, this device is 5 clicks on, 5 clicks off. Below the fire button we have the squonk bottle area. You can choose to use one of the two included squonk bottles in here. I opted for the clear version that has a harder plastic shell. This is most probably my favourite part of the device as a whole. It just seems to squonk extremely well! The darker bottle is your usual squidgy bottle that you find in most squonkers. Nothing special about that at all.

How Does the iJoy Combo RDA Perform?

On the RDA, I have been using a pair of the included coils, which come out to about 0.19Ω on the Coil Master 521 Mini Tab. Ease Of Build On The Combo RDA

Building on the Combo RDA is pretty straightforward… Apart from one thing. The post screws! Where they’re at an angle, you instinctively tend to angle the screwdriver at a right angle to the deck, rather than at the same angle as the screw is. I just found it awkward to unscrew and screw in the coils on this deck. But once you’ve got those coils in, put some wick in there and tucked it down into the wells, it’s pretty plain sailing! Using some Riot Squad Punk Grenade vape juice the flavour on the Combo RDA is acceptable. I wouldn’t say it’s something to write home about, but I would say that it’s more of a cloud chasing RDA than a flavour atomiser.

How Does the iJoy Capo Sqonk Mod Perform?

Ugh. This is where we get into the negative side of this kit…

To get this to fire anywhere near the 100w mark, you’ll have to build around 0.15 or lower. If you build above that then you’re going to get an extreme lack of power.

So after a bit of research and some help from The Vaping Postman, he explained that you have to treat this like a mech and build at the previously mentioned 0.15 or under mark, due to the mod only outputting 4.2v. There isn’t a voltage booster in this device, so it’s not going to hit those high wattages like they would on any other device.

Well. Where do I start?

Lets start with the RDA. It’s nothing special. Just a bog standard dripper with an angled deck. The post screws are annoying to adjust and could potentially lead to stripping.

Now the iJoy Capo Squonk Mod… It had A LOT of potential to be something good.

Something that newbie squonkers would enjoy using. Putting builds they’re comfortable with on an RDA and vaping away like mad. But no, you are really limited to low ohm builds to get any sort of decent performance from this thing. I’m not sure if the board was an oversight, but it has been the main thing to let this kit down.

Overall, the kit is a nice looking kit! And that clear squonk bottle is one of the best things about the iJoy Capo Squonk Kit! Definitely a lost opportunity here from iJoy.