The Mimi’s French Toast review and this e-liquid range is a creamy fruity trio of juices, with a side of – you guessed it, French Toast!

I haven’t come across this range of juice before, however, Mimi’s French Toast is manufactured and distributed by Apollo Ecigs. Apollo has been playing the game since 2010 and initially established themselves in the San Francisco Bay Area.  They have a wide range of juice and hardware, so they should know what they are doing.  The Apollo Brez Kit, the FAQ juice range and the Apollo Ohm Go Kit to name just a few.

Mimi’s French Toast e-liquid are just one of their many juice ranges.

To say that Apollo follow strict guidelines for their manufacturing would be a bit of an understatement with ISO standard clean rooms and PhD level chemists, probably not many companies can say this, I’m sure there are some out there like an episode of Breaking Bad!

Apollo serve over 90 countries worldwide with one of their distribution hubs right here in the UK.

With the size of Apollo I am actually quite surprised that I have not come across their juice before, it may be that it’s not easily come by in Northern Ireland but it is readily available online.

What Can We Expect From These Mimi’s French Toast E-liquids?

The Flavour profiles are quite clear, French toast with fruit and cream, I like all 3 so this should be a good one.

It is my first French Toast vape so I am kinda excited about it, never be afraid to try new flavours – I hate watermelon but I love watermelon vapes, figure that out! 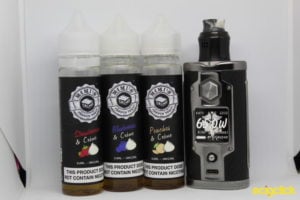 The juice comes in a 60ml short fill bottle, this means that there is 50ml of juice, leaving space for a 10ml nic shot to be placed in should you wish.

Apollo then advise to let it sit for 30 minutes to let the bubbles clear.

Now, this is a max VG juice, which could mean up to a 90/10 mix if not more.  I cannot find on the web site nor the bottles the exact mix ratio.  The ingredients on the bottles are: Vegetable Glycerin, natural artificial sweeteners and flavours.

I have never had 100% VG before, but then it also says in brackets (may contain propylene glycol).

Read more about VG and PG.

For the purposes of this test we will be going back to my old faithful Wotofo Recurve RDA, built with a 0.3 ohm flat Clapton coil and running at 65w.

This has been placed on top of the Yihi SXmini G Class.

These bottles of e-juice have been supplied to me free of charge for the purposes of the review and I will give my honest opinion.

Fluffy and delicious French toast stuffed with crème and smothered in blueberries.

I am definitely getting a smell of sweet blueberries from the bottle, it’s really quite appealing.

Putting a drop on the finger, you really get a nice sweet creamy blueberry taste, I already want to lick the bottle and I haven’t even vaped it yet.

So on the inhale, I’m getting cream, just cream.  Exhaling comes with the blueberries and cream mixed, not as sweet as the finger test but there is definitely a sweetness to it.

I’m not picking up a French toast from it, if it is there it is being out shined by the Blueberries and Cream and ya know what, I really don’t mind.

I am genuinely struggling with the smell on this one, it’s not exactly peaches, it almost has an alcho pop smell to it.  Yea yea, how would a big bearded Diabetic middle aged man know what an alcho pop smells like, I was young and innocent once you know!

Quickly moving on, the finger test had to be done a few times, this was a tough one to pinpoint.  Yes there is a hint of peach but what type of peach.  Fourth drip, got it…..Peach schnaps!

The inhale again is all cream, exhaling and the peach starts to come to the forefront with the cream in the background.

Even smelling the RDA after vaping I’m picking up the peach schnaps, I swear you can smell alcohol, alas there is none.

There is a slight sweetness from the vape, and I can see me vaping this all day.

Fluffy and delicious French toast stuffed with crème and smothered in sweet strawberries.

I’m getting the strawberries and cream mixed in the smell from this one.  It does not smell sweet in the slightest but it is like a candied strawberry smell, just without the sugar.

In saying that, there is a definite candied sweet strawberry from dripping it on the finger.

The inhale again is all about the cream.

Exhaling, brings a 50/50 mix of the cream and a not quite ripe strawberry.  However, I am getting a sense of French Toast at the end of the exhale of this one – took me a bit by surprise.

Again, I’m getting an alcohol vibe after a few vapes, its not terrible and by no means takes away from the flavour, it’s just that smell from the RDA after vaping.

I seem to be saying the same thing in my last few juice reviews, we score the juice against the flavour profiles described, if the flavour profile is Brussel sprouts and cheddar cheese and that is exactly what I get from it, disgusting or not to myself, then top marks.

All 3 juices were very enjoyable for me, the blueberry one is definitely my favourite and will be in the queue for full consumption in the very near future.

Lovely vapes or not, I just can’t pick up the French Toast out of the flavour, maybe a hint in the strawberry but definitely not with the blueberry or peach.

Cloud production is immense, top marks there and that is down to the mix ratio, the VG ratio is definitely in the high 90’s with these – windows had to be opened wide after the first pull.

If you are a fan of creamy fruit vapes then I would definitely have a look at the Mimi’s French Toast e-liquid range, I think they just forgot the toast, that or its absolutely smothered in the cream.

Have you tried this range of e-liquids?

Let us know what your thoughts are in the comments below.