Following on from the runaway success of the annual Stoptober campaign – Public Health England is once again throwing its hefty weight behind e-cigarettes as the best way to quit smoking.

They’ve called the stop smoking campaign Only One You and have created a hard hitting TV ad [we reported in the recent Vaping News] backed up with leaflets and posters including one that says Stop Smoking With A E-Cigarette in 2018.

Given this is an NHS backed and funded campaign it’s yet another shot in the arm for supporters of vaping as the undisputed best way to quit smoking. This is the 6th year of the NHS Smokefree Health Harms campaign and the first to identify the value of e-cigs as a cessation tool.

This year the ads focus on 7 long term smokers all pledging to quit the cancer sticks this January including former Dragons Den member Hilary Devey.

Public Health England ran a series of tests on the group and said:

The test results show how their smoking has led to elevated levels of cadmium (a metal used in batteries), cancer-causing nitrosamines and carbon monoxide in their blood.

These toxic substances are amongst over 4,000 chemicals released into the body with each cigarette smoked, including more than 70 known cancer-causing compounds.

Also featured is a short film with Hilary and Gloucester based Dr. Dawn Harper who discuss the dangers of tar from smoking – and trust me it really should give a wakeup call to smokers – particularly now e-cigarettes have advanced so much.

Hilary was a 20 per day smoker for over 40 years but on seeing the test results admits she was shocked to say the least:

Like many, I’ve been hooked on cigarettes and ignoring the damage – even though I know the harm I’m doing, I’ve found it extremely difficult to quit for good. Even a stroke 3 years ago only led me to stop temporarily.

Seeing the high levels of poisonous chemicals in my blood from these tests really hit home how dangerous continuing to smoke is – and for that reason, I’m done!

The campaign signposts smokers to an NHS OnlyYou web page dedicated to the benefits of using e-cigarettes as a tool to quit and includes answers to many questions people might have.

Thanks to the tons of negative media surround e-cigarettes and vaping – the public still believes – wrongly – that vaping is just as bad for your health as smoking.

This could not be further from the truth with PHE themselves proving that vaping is 95% safer than smoking.

An estimated 2.9 million adults in Great Britain currently use e-cigarettes and of these, 1.5 million people have completely stopped smoking cigarettes.

They carry a fraction of the risk of cigarettes and can be particularly effective when combined with extra quitting support.

This is backed up by Professor John Newton the head of PHE who said earlier this year:

E-cigarettes are now the most popular way to quit in the country with half of all those taking part in Stoptober last year using an e-cigarette.

The evidence is clear – vaping is much less harmful than smoking – a fraction of the risk.

So, if you’ve struggled with quitting before, an e-cigarette may be the best option for you.

Dr Harper took a leaf out of our own octogenarian vape advocate Terry Walker’s book by saying it’s never too late to quit:

I know how difficult it is to stop but the important thing is to commit to trying again, no matter how many times you might have tried and failed in the past – it’s never too late.

What is a breath of fresh air for the vaping industry is the fact Independent British Vape Trade Association [IBVTA] is backing the scheme and that means bricks and mortar vapes stores are involved.

Shops like the Southampton Vaping Centre getting behind the campaign and even adding a dedicated web page.

January is a time when we consider making life changing decisions. These decisions normally involve improving our personal or a loved-ones wellbeing. So, if you require any help or advice about a desire to stop smoking in 2018, we’re here to help.

As founder members of the IBVTA, we are delighted to once again participate in a joint public awareness campaign with Public Health England that seeks to help anyone wishing to stop smoking and is considering Vaping for the first time.

In our sixth year, Southampton Vaping Centre has a wealth of experience and a vast range of Vaping products that will make your transition from smoking almost effortless. 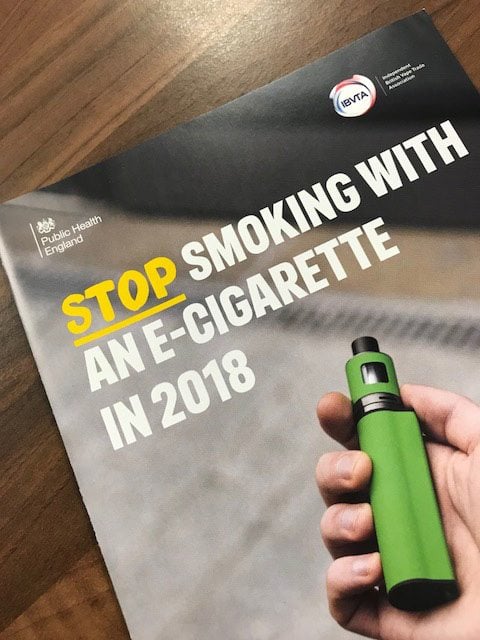 I wrote a piece last year suggesting vape shop employees were the obvious people to train up to become Vape Ambassadors – able to offer sound and sensible advice to beginners rather than selling them inappropriate expensive gear.

I for one hopes this is one area PHE and indeed IBVTA encourage and expand because they are the front line on the local high street.

All You Need To Know About Quitting Smoking With E-Cigs

All of us in the EcigClick team were smokers and all of us managed to quit using e-cigarettes.

Indeed you can read our personal How We Quit Smoking stories – with part two HERE.

We know how hard it is and trust me when I gave up over 6 years ago now the starter vaping kits we had back then were pretty dire – things have come a long way since then – we have a guide to the very best e-cigs for beginners so do take a look. We have everything you need to quit via vaping from the right vape kit – the right e-liquids and indeed the pros and cons and health risks around vaping.

We are also around to answer absolutely any questions no matter how trivial they may sound – and we will treat you with respect!

OK here’s a quick list of topics those new or considering coming to e-cigarettes will find helpful – there’s plenty more on the site just use the search button or ask!

Hope that helps and trust me – indeed trust all of us here at EcigClick – if we can do it YOU CAN!