Today I’m reviewing the OBS KFB2 all in one kit. A starter kit that isn’t a pod system, something that’s a bit of a rarity these days. 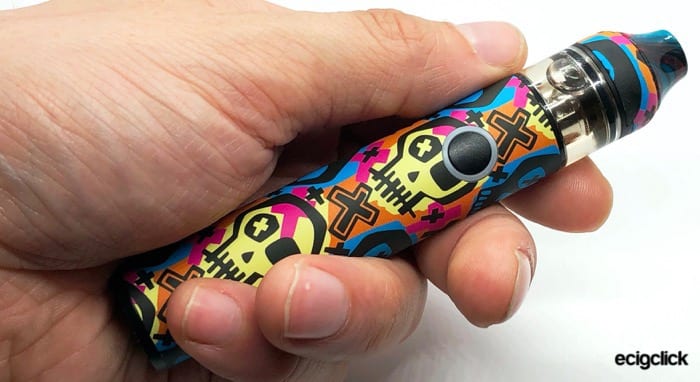 OBS aren’t as prolific when it comes to releasing products as some other vape brands are. What they do release tens to be quality. We have covered a few products from OBS in the past including the Cube kit and the Draco and probably their best known product the Engine 2 RTA.

What Can We Expect From The KFB2 by OBS?

The KFB2 is an update of their KFB all in one device that Michelle reviewed back at the end of 2017.

OBS have moved away from a replaceable 18650, to a very respectable 1500mAh internal battery, they have also made the glass tank replaceable, fixing one of the gripes with original.

OK.. Let’s get straight on with the review.

The kit was sent over free of charge for the purposes of this review, but I’m not swayed by freebies, so I will report back honestly and transparently on what I find. 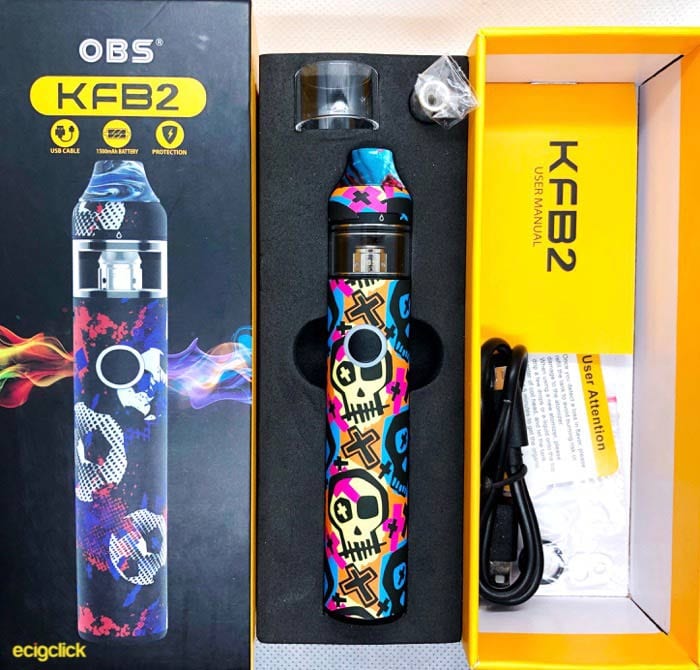 The OBS KFB2 is a small tube/pen style starter kit. The stainless steel tube is covered with some of the most “out there” graphics I’ve seen on a vape in a while! Very Freemax Twister like. I was sent the Rock skull version, but there’s also Monster Castle, Soccer, Skull lover, Jungle adventure and Virus. When I first opened it I was a little shocked at how bright and colourful it was, but the design has grown on me.

The graphic is finished in a lovely soft touch plastic, it feels really nice in the hand, and doesn’t pick up fingerprints in the way a polished one would.

Starting at the top you have a conical shaped 510 drip tip, this is double o-ringed and continues the curve of the top cap so it has a really wide base. You can put your own 510 mouthpiece on here, but they will look a bit weird.

It’s a slide to refill top cap, you just push away from the little droplet symbol. Be warned though, the first time I did this I sent it flying away across the room, as the top cap is not permanently attached.

It runs on rails around the fill port and uses a little ball bearing/divot, to hold it closed or open.

If you push it further than open it will just totally come off.

I actually love this idea, as the one problem I’ve found with slide fill top caps is that the silicon seal around your fill port can often get trapped, torn, or just wear out over time, and most don’t give you anyway to replace this.

In the KFB2 you get another fill port seal in the spares bag, so it’s easy to replace if you need to. Massive thumbs up to OBS for this one!

Next up you have the glass, which thankfully isn’t built into the body like it was on the predecessor. In fact OBS supplies you with another one in the kit, so another thumbs up from me.

Near the top of one side you have your air intake for the bottom airflow. OBS has positioned this at the halfway point between your fire button on one side, and your USB charge port on the other.

They obviously thought about where best to place this, as on such a small device it’s often easy to cover your airflow. By placing it where they did, I have not ever ended up covering it, no matter how I held it.

USB charge port is on one side, and on the opposite side you have your main button. The button has a nice click to it, and is surrounded by a ring that lights up. 5 clicks on, 5 clicks off, and press to fire.

To change your coil you want your tank to be pretty much empty as you need to unscrew the whole of the top section and the glass from the coil.

I found that if you turn it upside down, then if you do have a little bit of liquid left in it, it will just sit in the top cap until you put it back on.

The glass stays attached firmly to the top cap and the coil remains sitting on the the top of the battery compartment.

Unscrew your old coil, screw in the new one and then screw this back in to the top cap.

How To Fill The OBS KFB2 Tank

Filling the KFB2 is super easy. How Does the OBS KFB 2 Perform?

This thing just keeps going and going! It’s like the Duracell bunny of vape kits.

I’ve run several tanks of e-liquid through it and been using it as a backup device for days.

So far I’ve only had to charge it twice. This is easily one of the longest battery life AIO devices I’ve tried.

Charging is also remarkably speedy, plugging it in the LED will light up to show you the current charge level, a red light is less that 4V, white light is over 4V and it switches off when fully charged. In my testing it went from empty to fully charged in about an hour.

One thing that I’m not that keen on though, is that you don’t get any battery indicator on the device. When you’re vaping the LED will light up white, and when it gets too low it will light up red. However when it lights up red, it won’t fire anymore, so the colour is a bit superfluous!

I would much have preferred it if it went red at 20 or 30 percent remaining charge, so you knew it was getting low. However this is a minor niggle, and the battery life and quick charge help to mitigate it. This was the coil that was pre-installed in the device, and it was only because I really thought I should review both that I eventually took it out! It’s lasted over a week so far, with no noticeable drop in flavour.

Speaking of flavour I’ve been fairly impressed with this coil. I started out with 50 Large Berry N’ Ice at 70/30, then tried Vape Simple’s Berry Ice for 50/50 and I even put a couple of tanks of Double Drips Raspberry Sherbet Coil Sauce at 80/20 in it.

With all of these the flavour was exactly what I expect from those liquids. It wasn’t the sort of full-on flavour I’ve experienced from some other tanks, but it did really well in bringing out the full flavour profile, even if it was a bit more muted than the rebuildables I tend to vape on.

Wicking was superb throughout. As I am a bit of a chain vaper, I hate to have a tank that you need to let rest between draws.

Really pleased to say that even using a tank of 80VG/20PG vape juice, I never got a dry hit, even when I was puffing away like a steam train! Vapour production is good as well, with nice satisfying little clouds for such a small system.

At the constant 3.5V output, it will be giving you about 20W of power. Airflow is either a loose mouth to lung (MTL), or a slightly restrictive Direct to Lung (DTL) draw. I really like the fact that I can change up how I’m wanting to vape on this without having to change the coil or adjust the airflow.

It’s not going to appeal to people who want a really tight draw, or who want one massively open, but for a non-adjustable airflow it hits the sweet spot of being comfortable with either.

Read more about the different between mouth to lung and direct to lung vaping here.

Switching over to the 1.2Ω coil, you’re immediately met with a much tighter draw. There’s no way I was going to be able to do a direct lung hit on this coil! I filled it up with my go-to 50/50 liquid from Vape Simple since this is far more suited to MTL.

On this coil you’ll be getting about 10W of power to the coils.

This coil gives a much stronger flavour than the 0.6, it actually reminds me fondly of the flavour from the Aspire Nautilus coils (high praise indeed!). Cloud production is a little lower, but it’s a decent trade off.

I’d be really hard pressed to pick my favourite out of the two coils, while the 1.2 is closer to what I normally vape and the flavour is better, I really appreciate the flexibility of the 0.6.

The drip tip that comes with the kit is a fairly large conical drip tip, with quite a small bore and a depression in the top. Getting the callipers out I measure it to be about 2.5mm diameter internally.

This does mean that I’ve had to deal with a fair amount of condensate, with liquid sitting inside the slight depression at the top. You can easily switch out to another drip tip, but as the top of the tank is plain steel, it looks a little bit weird when this is no longer covered up by the included tip. OBS have definitely taken some of the criticisms of their original KFB onboard, and come out with a lovely little device that I’d feel really happy recommending to a smoker looking to switch to vaping.

It’s simple to use, gives good flavour, and has great battery life. All contained in a really nice little device that will easily slip in a pocket. I wish that the drip tip were a bit better, as I think it’s one of the few things that lets this device down, but I’m glad they went with a standard 510 rather than something propriety, as if you don’t get on with it, you can switch it out.

Have you used the OBS KFB2 Kit? Let us know your thoughts in the comments below!