We’ve something of a controversial start to the Smok Thiner Pod Kit review.

I’m not sure whether it’s another deliberate marketing ploy on their behalf but I can’t find the meaning to the word thiner. I can find the meaning to the word thinner, which by all accounts would sum up this pod kit.

Smok. Smoke. Thiner. Thinner. You can see where I’m going with this, can’t you?

Smok certainly isn’t shy in dishing out its fair share of pod kits.

Including those designed for the new vaper.

We’ve the likes of the Smok Stick N18 or the Smok Nord AIO 22 which, while being pen style devices are instantly accessible to those needing a jumping on point.

An intermediate to advanced pod user will often be seen tugging away on the more power hungry Smok RPM80 or RPM160.

Lest we forget the popular Smok Fetch series.

So It’s safe to say they’ve pretty much got everyone covered. That’s without mentioning the vast array of backward compatible replacement pods and coils.

I’ll stop there – my head is already starting to hurt! lol

What Can We Expect From the Smok Thiner Kit?

This is new territory for the Shenzen based manufacturer and maybe not only as a way of keeping pod kits highly portable but dare I say, fashionable and trend setting too?

Expect to find this one in quite a few trouser and shirt pockets based on its ultra slim, ultra lightweight build. Being a lower powered device don’t expect a convoluted menu interface, instead functionality is restricted to a single button placed on the side of the device.

I’m hoping the integrated 700mAh battery will provide a full days use before needing those fast type C charging capabilities.

For many, mesh has taken the lead as far as flavour quality is concerned and that’s what Smok include as its choice of coil material.

It’s a bit misleading when studying the user manual, however.

The coil is described as plug and play. Let me remind you this is a one use, disposable pod.

The coil is not replaceable, so it’s not plug and play in the way you may be assuming.

Sensible limits have been placed on maximum power to the mesh coil. So while there’s variable wattage it should be flexible enough to offer decent flavour quality.

At least that’s what I’m expecting..

So let’s get into this.

Does the Smok Thiner Kit give us great flavour or is it thin on the ground?

The size and depth of the little slip carton gives an instant indication of what to expect from this super slim vaping pod. 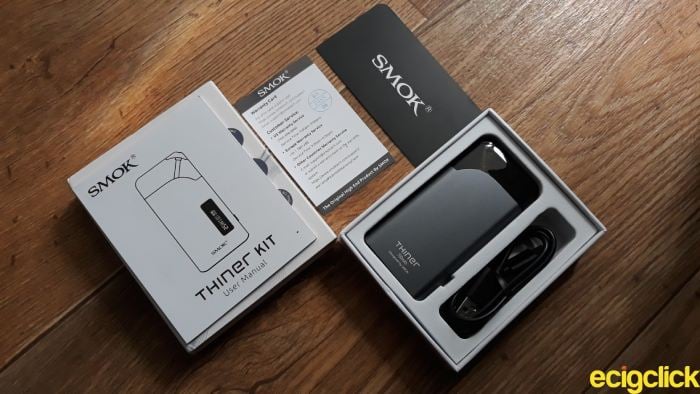 Smok has classed this as being more creative and space saving than the average bulky vaporizer.

It has adjustable wattage between 5-25W while the plug and play system simplifies pod replacement.

This basically tells us we are dealing with a disposable pod. It’s clearly nothing new but still ideal for the new vaper.

The pod utilises an auto draw feature so there’s no need to play hunt the fire button with the Smok Thiner kit.

A 700mAh integrated battery is designed to power the device for up to a few days. The 0.69 inch OLED screen provides real time data including battery life, selected wattage, coil resistance and the number of puffs recorded.

Type C USB charging is incorporated to speed up the time taken to revive an exhausted battery and a quintet of safety measures are built in, always nice to know.

I’ve been lucky enough to receive the standard/US edition which comes equipped with a 4ml pod. The EU version is identical but the illustration on the carton differs.

The TPD version includes a familiar 2ml pod capacity while all other package contents remain the same.

Without a doubt the stand out feature is its shape and size, and we’ll get into that shortly.

This is by far the slimmest vaping device I’ve come across in all my years of vaping. I’m pretty stoked!

The reasons will become obvious as we continue to delve in.

The Smok Thiner Kit lives up its specs. It does indeed measure a mere 10mm thick. The width comes in at 43mm with a height of 88.5mm.

So it has the height of a credit/bank card but not as wide. That may give you some idea of the portability factor.

The body of the device has a nice anodized finish that feels very smooth to the touch.

Rounded edges and general contouring makes it feel very comfortable in the hand.

A single small airflow pin hole has been punched into the side of the battery section. This will provide a tight mouth to lung vape as the suppressed air enters the coil from beneath.

This is one of those occasions where I’m actually pleased the type C USB charging port has been built into the base. It would have ruined the aesthetics of the device had it been side mounted. Three small magnetic tabs are clearly visible inside the battery section. The gold plated coil contacts are spring loaded while a centred spacer ensures rite of passage for airflow under and on to the mesh coil.

On the opposite side of the single airflow pin hole, positioned further down is the menu button, it’s very easy to use – again, ideal for the new vaper.

Since there’s only a single menu button the device will round robin after maximum power is reached.

While in wattage select mode keep the button held down to speed up the process of adjustment.

While vaping, the display will briefly switch from wattage mode to puff duration.

It’s made from a tough PCTG material and perfectly follows the curves and contours of the battery section.

The non removable mesh coil is attached inside at a 45 degree angle. The chimney of the coil exits at a corner where the small bore plastic mouthpiece resides.

There appears to be two small wicking ports measuring no more than 3mm in circumference. The battery is capable of powering up to 25W but Smok recommend 12W for the 0.8ohm mesh coil.

The minimum fill level pretty much coincides with the depth at which the pod sits inside the battery section.

However, because the pod has a tapered side the remaining juice level can still be seen through the semi tinted plastic. Two magnetic battery contacts are visible on the underside of the pod as well as an air ingress port for the MTL mesh coil.

The fill port is side mounted with a red silicone stopper. I found it very easy to unplug and just as easy to fill with E liquid. It isn’t the widest of fill ports so be extra vigilant if using wider bottle nozzles.

A quick look at the pics will show the pod is only capable of fitting one way. You could try and fit it back to front – but you’ll end up looking a bit silly lol!

How To Fill the SMOK Thiner Pod

Leave the e liquid to soak into the cotton wick for around five minutes before vaping – known as priming your coil.

Smok Thiner Kit – How Does It Perform?

Smok is quite happy to recommend juice ratios of 70VG/30PG with the Thiner pod kit.

Being a low powered MTL device I wasn’t too happy going along with this suggestion so opted for a more realistic 50VG/50VG alternative.

Smok also suggest vaping at a power level of 12W. That didn’t work for me because the flavour notes arrived too late and too flat for my liking.

I pushed the mesh coil capabilities up to 20W, and the result was a slight stinging sensation brought on by MTL airflow restriction.

Flavour properties were quite good although the setting did seem to be pushing the wicking capabilities.

At 15W the Smok Thiner Pod Kit provided me with my sweet spot. The balance between decent flavour and vapour production was found here.

So let me mention my thoughts on the MTL vape. It impressed me with just about the right amount of airflow restriction to pull off the experience gained from cigarette smoking.

Extended inhales worked a treat for bringing out the sweetness of the peach although the dairy content was generally an afterthought. I was also able to get a satisfying throat hit from the freebase nicotine.

The level of airflow restriction also meant the vape was as quiet as a mouse.

Vapour production was thin, wispy and very stealth like, ideal for out and about or during moments where discretion is the better part of vaper.. valour.

The coil performed solidly over five days of testing.

I got a consistently decent flavour every vape, even when chain hitting. The peachy notes and the sweetness always punctuated the exhale and vapour production was more than acceptable from this low powered MTL device.

Is it the ultimate MTL experience? In all honesty not quite.

It could do with being just a tad tighter on the restriction. However, that’s not going to trouble the new vaper in any way, I feel.

The coil also didn’t leak. The air intake hole on the underside of the pod remained bone dry. Impressive.

I got a total of fourteen and a half hours from a single charge, vaping at 15W with the occasional chain vaping session thrown in.

During this time period I racked up 372 puffs on the counter and guzzled around 5.5ml of e liquid.

Fast type C USB charging was faster than I expected. It took a mere 40mins to revive the flat 700mAh battery, another impressive result.

It took a while to get used to the positioning of the mouthpiece. On a few occasions I ended up using the wrong corner – resulting in a plastic flavoured vape devoid of airflow and cloud production lol!

A major plus point is the weight of the device – It’s incredibly light, so much so that it’s almost undetectable in the pocket. On the subject of pockets don’t expect any awkward glances thrown in that direction. Whether that’s a pro or con I’ll leave for you to decide lol!

Filling the pod was incredibly easy and took very little time. It was a very manageable procedure even on the fly. Not once was an airlock encountered although having the 4ml capacity pod may well have helped.

When the last vape has been vaped this one’s not for me.

The days of vaping on low powered MTL devices are pretty much a thing of the past for me. They don’t give me the power, flavour or cloud production I’m now so familiar with.

However, I did start somewhere albeit with a low powered pen style device.

There’s no doubt in my mind that had the Smok Thiner kit been available back in the day I would have chosen this.

The reasons are multi fold. The portability factor, the ease of use, a manageable filling system, no faffing around with PnP coils, the simple and easy to navigate menu and of course..

I’m no longer as thin as I used to be when I first began vaping but I’d be more than a little thick not to recommend the Smok Thiner Kit to someone starting out on their own vaping journey.

For those folk it’s the perfect starting place. Vaporesso Target 80 Pod Kit Review – On Target For Another Success?