Today I have the Suorin Vagon pod system. A device from a brand that is known for it’s simple, clean pod mod designs with the previous Drop Pod and iShare getting a lot of interest from vapers around the world.

It was, however, the Suorin Air pod mod that really put them on the map. One of the slimmest vape devices still to this day.

Moving on Suorin have created yet another pod mod device but it is something that little bit different. The Suorin Vagon got my attention strait out of the box (due to its bright vibrant colour).

As far as pod systems go, this isn’t a bad little device. It’s not the best around, but not the worst either. As we speak I am using this device and I will be throughout this review. So, with that being said let’s get stuck in with the Vagon Pod Mod System.

This device was sent to me for the purpose of this review. This review is purely my own views and opinions.

All I can say is WOW. This build quality of this device has even stunned me (and that takes some doing). This is one device that would attract attention. It is sleek, elegant and has appeal. The Vagon is what’s known as an ‘automatic’ vape device. By automatic we mean no button presses, simply take a drag, the device recognises this and will activate. Couldn’t be any simpler.

The materials used to construct this pod device are decent. It has that study and hard build feel. The pod system itself has a plastic build to it. But that being said it is still sturdy. But I am not too sure that the pod itself could survive to much of a beating!

The Suorin Vagon sits nicely into the palm. Due to having no firing button it can be held in various ways (Users choice). Yes, people you heard right. Suorin has elegantly blended a belt clit into this device. So, it can be clipped to your trousers, even the top of your suit pocket. If you’re forever leaving things behind like me, you will never have to worry where you left it!!

How Does the Suorin Vagon Preform?

Further reading: Guide to VG and PG in your E-Liquid

While i didn’t have any to hand when testing, Nic salts are also a good choice for this sort of device and make for a smoother vape while still satisfying that nicotine craving.

How To Fill The Suorin Vagon

To Remove the pod simply pull it off, vice versa for installing it.

Filling this pod system can be a tricky one. If you have nimble fingers, your laughing. There is a small rubber tab at the bottom of the pod. You have to pull this up, which in turn pulls the rubber bung up. The device recommends that you should allow the pod to sit at least 10 mins before vaping (to allow the coil to soak up the juice)

There is a light on top of the device that shows an approximate level for your battery.

I have one big niggling issue with this device. When you pull on it for the first time it doesn’t fire strait away (almost like you woke it up out of a slumber. But after that this little guy preforms fine. The mod has an impressive 430mAh battery, which actually lasted quite some time, I am quite a heavy vaper and this little device lasted over a day.

When it comes to charging the battery takes around 40min to an hour to get back to full power.

The pod itself has a recommendation to be changed every 5 refills, however I had started to taste a change in flavor after 6 (I might have just been lucky! Lol). The pod itself lasted me for around an 2hr to 3hrs from full to empty vaping quite heavily. I should add I work out doors so I’m not restricted to when I can/can’t vape)

Ok first of all this is a pod mod vape system. So, don’t expect room filling clouds. The flavour for me was just Ok with the e-liquids I used but I have had another main stream pod mod user try this and they enjoyed the flavour.

I would recommend the Suorin Vagon pod mod to new vapers who want an easy vaping experience but it may not necessarily be a good match for the more experienced vaper. I believe this mod would suit people who want a stylish device that can latch onto your pocket or can be easily carried around. 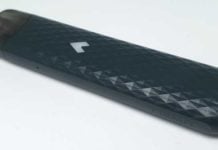