So that’s Vaper Expo done and dusted for 2018 and the two days I spent there were – for me personally – the most enjoyable yet.

Not everyone I spoke to agreed and the event was slightly marred by a handbags at 10 paces style ‘brawl’ between two juice companies – check social media for who they were as they’ve had enough publicity. Suffice it to say it was all over in a few seconds – more ‘slow blo’s‘ than a proper punch-up lol – and dealt with admirably by the NEC security team. Anyway onto the event itself and as seems to be a ritual I once again managed to lose my bloody notebook packed with names and quotes – I really do need to tie it around my neck next time lol. However expect more than a few detailed articles coming up on the back of the sheer amount of networking I did…thankfully I didn’t lose the mountain of business cards I collected!

As I said in the Weekly Vaping News – no one product dominated – back in May it was wall to wall CBD and pod kits. They were well represented and I guess I might have a bit of pod fatigue because I really didn’t bother looking at any of them if I’m honest – all very much samey same!

Every-man and is Uncle is now doing CBD vape juices and that includes Vape Dinner Lady who launched their tongue drops and Lemon Tart flavoured CBD e-liquid – they seemed to be doing brisk business especially on B2B day where I guess stores and distributors were anxious to get a piece of the Dinner Lady CBD pie. I was very impressed with the range of CBD sub ohm liquids from VapeWaves – very fruity indeed and I have three from the range to review very soon. New hardware was once again low on the ground with only a handful of big name releases – I’ll get on to those shortly and the inclusion of the build area was a nice touch and as you’ll see in a wee while I was extremely impressed with the skills of the builders – how they spin those coils is poetry lol. 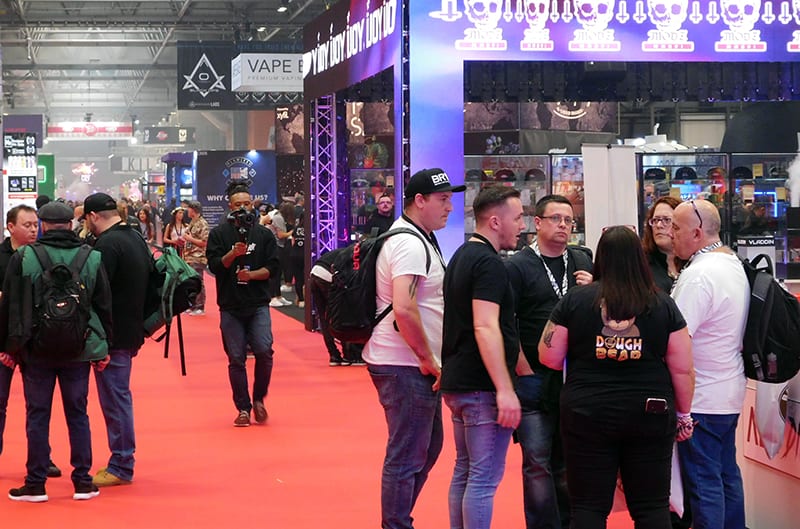 Despite the huge crowds on Saturday – the clever layout meant you rarely felt crowded though many found it all a little bewildering off the ‘main drag’ so to speak with the smaller stands in little enclaves. The giveaways came fast and furious and even on the periphery taking photos I was barged and jostled as eager beaver vapers plunged into the fray to snatch 10ml bottles of e-liquid out of the hands of others…it was like a bad tempered scrum in there at times. As for the ‘hosts’ I guess the bloke – don’t know is name – was OK but if I heard “Make some f**king noise” once I heard it a thousand times and screechy American woman was there again doing her best to pump up the crowd…not for me but hey it’s all part of the expo experience I guess.

IQOS was there as were BLU – the latter sponsoring the Bar and Chill area where some of the UK YouTube reviewers set up for the 3 days. I was tempted to try the new IQOS mesh device but I’m pretty sure the Big Cheese on the stand spotted me and glared.

My E-Liquid Picks At Vaper Expo 2018 The Return

As always the expo seemed dominated by juice juice everywhere and not a drop to drink – with all the usual brands in attendance and thankfully the majority of ‘booth babes’ were not as pushy. Though Big Chris from Empire did say he received a lot of unwanted attention from the promo girls – must be my well practiced ‘expo resting face’ scaring them off lol. One of the standout stands for me was Zebra e-liquids with a wondrous Zulu band that held regular drum beat sessions – gave me a few tingles if I’m honest however the e-liquids were just OK.

Co expo sponsors Vape Airways had a very classy stand with pilots and very demure air hostesses [sorry I mean cabin crew lol]. They had the strapline First Class E-liquids and whilst they were OK there was nothing new with the flavours or indeed blending. I did meet up with the lovely Jane Mulligan owner – mixer extraordinaire of the ShyTots e-liquid range. She was placed between the coil builders in the coil area and told me she makes juices specific to the different builders – nice touch. I had a blast on a few and was thoroughly impressed especially by the new soon to be released Blue Sherbet – wow! And I was delighted to be given a bottle that has since emptied lol. If you’re looking for some proper home made but fully compliant e-liquids I suggest you head over to the ShyTots FB page 😉

When I’m taking photos of booths I seem to have the habit of scaring the staff off! No idea why but it happens a lot lol – that wasn’t the case with the team from Nova Vapes who posed like pro male models on seeing me lining up a shot! And I have to say their juices really stood out for me from the gallons I seemed to have tried and tested [thanks to Head Candy for those vaper tongue sweets lol]. I’m not really a dessert or sweet vaper but I was gobsmacked by the uncanny blending of that particular range – buying a bottle of Bakewell Tart [oh my] and the Victorian Sweet Chew [think Drumstick lollies] – their flavours really do taste like the real thing!

Managing Director Robert Coates was using the aptly named GeekVape Nova to let folks have a taste test and he’s also invited myself or Jonny up to Hartlepool at some point for the grand tour of the labs and manufacturing plant.

Not a lot if I’m honest though big name YouTube reviewers were out in force promoting their new tanks and in the case of Sam the Vaping Bogan – his new Bonza 1.5 mech kit…and yeah just like last May wherever he was a huge queue formed to shake his hand and get selfies…he’s the closest we’ve got to a Vaping Rockstar I reckon lol.

BTW he’s on a bit of a vape world tour at the moment but will be doing an interview with me mid November so keep an eye out for that one!

Mat from Suck My Mod was there pushing his new Wotofo Serpent Elevate RTA – however Mike Forber from MF Vape [who I spent a lot of time with] wasn’t that impressed having to fiddle about with it in the bar to try and get some flavour out of it – hopefully he’ll get it sorted with different builds before his review!

Mike Vapes seems to be at every expo these days and he was extremely pleased to sell out his new Hellvape Rebirth RDA. I bought one off the back of TVP’s glowing review and can honestly say and given I’m now a confirmed dripper 80% of the time – it’s an absolute flavour and cloud chasers dream! BTW I took it to Neale Hare over at the builders area and he spun me a pair of fused claptons and it vaped like a dream. The build area was a great touch – quiet on the B2B days but popular on the public days to say the least. Brian from the Vaper Chronicles was there promoting his DovPo Topside squonker and it seemed he was doing a roaring trade – the smile never leaving his face…by all accounts he’s a lovely man however such were the crowds I never got a chance to chat. The Vape Famous at Expo

I’ve already mentioned the big name USA reviewers and there was plenty of home grown talent too. This year I spent more time with the shall we say smaller subscriber reviewers – though I did have a pint with two well known UK Youtubers, Vaping v1ck and the very friendly Paul McCartney from Vape Don’t Smoke – it was his first Expo and he was enjoying the social side more than anything else. To be honest there wasn’t much point getting a quote off any of them really as the same thing came over …”it’s big loud and not many new bits of hardware’ lol. I spent a lot of time with Mike from MF Vape and had a very long chat with his wonderful wife Lisa who was thrilled to meet up with SoulOhm! And another ritual at Expo for me is meeting up with Danny aka MBKVaper reviews – always an absolute pleasure. I had a beer with Aiden Little Bro Vapes – MoBro and Wayne from WGD Vapes and Kieron from AvC before being joined by TVP himself which was a great laugh as you can imagine.

Can You Recommend A Decent RDA I Can Buy?

This made me laugh…

A couple of blokes sat near the group of us in the bar and seeing we were reviewers asked to recommend the best RDA to buy.

Thankfully I got mine early doors on day one…the Rebirth is gonna be popular let’s put it that way!

So does bigger mean better..?

Maybe…there was a lot of shall we say distinctly average pods – mods and e-liquid – you really did have to cut through the crap to find the good stuff…maybe crap is a bit strong of a word but you get my drift.

I rushed around like a maniac on the two mornings filling up my notebook [lost lol] and then found myself in the bar ‘networking’…yeah I really did get a lot done and sorted and it was great to hear the enthusiasm from UK reviewers in particular about the upcoming EcigClick Awards. I got the same from more than a few vendors too.

Speaking of vendors it was good to see a few cotton companies displaying their wares and I came away with a couple of samples with a plan to add to my best vape cotton test soon.

I love a good quality tobacco e-liquid and was in seventh heaven sampling the stunning selection from Italy based Azhad Elixirs. I had a VERY long conversation with the main man Dario Colaianni – sadly his heavy accent – my poor hearing and the noise of expo meant even if I’d not lost my notebook I barely understood a word he said lol.

However for the tobacco e-liquid connoisseur I can’t recommend these highly enough – and when I say these I mean bloody hundreds of various flavour twists. I was absolutely delighted to receive a carrier bag full to the brim of every single flavour and more after offering to buy the range I particularly liked…-a lot of juice to review there alone! Wow “grazie Signore!”

This was probably the first Vaper Expo I’ve been to where I spent more time networking and actually enjoying the show than out and out ‘interviewing’ – I met old friends and hopefully made some new ones – so thanks for making my time there so enjoyable.