In for review are the Vapes Bars Ghost 800 Disposable Vapes. 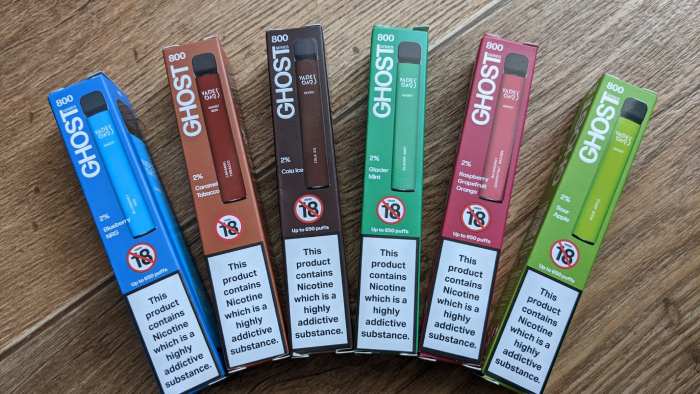 There’s not a great deal I know about Vapes Bars other than they appear to be UK based thus catering solely to current TPD regulations.

That’s no bad thing either because their entire range carries the distinct, classic look and feel of traditional disposable vapes.

They’ve appeared at the world vape show in Dubai, recently exhibited at the Vapexpo Madrid and also had a booth at this years Vape Expo in Birmingham, England.

With the mission statement of ‘Famous for flavours, known for performance and loved for design’ they’ve given me three main areas to focus on.

So let’s find out if the Ghost series lives up to those claims.

What Can We Expect From The Vapes Bars Ghost 800 Disposable Vape?

Designed for a fast paced lifestyle and enhanced by unique flavours, The Ghost 800 series joins the Diamond 600 and Angel 600 ranges of disposable e-cigs. By now we’re all pretty much aware of what the number prefix means in terms of puffs but Vapes Bars make life a little confusing when perusing their website. It states the Ghost series is capable of anything up to 800 puffs although the packaging clearly states 650.

To compound issues other websites are making the same claim. Very weird!

Either way, we’re going to find out the truth today. As well as how long we can expect the 550mAh integrated battery to last.

We can expect a smooth vaping experience from the 20mg of salt nicotine included within the 2ml juice capacity. Vapes Bars also cater for vapers that prefer a lower 10mg intake. Naturally with a lower powered device the juice ratio is 50VG/50PG. The thinner e-liquid shouldn’t spill or suck up during the inhale thanks to Vapes Bars anti leak technology.

The disposables certainly do have a stylish appearance. They are lightweight, compact and in colours that match the included flavours.

Speaking of flavours there are a total of 18 to choose from in the Ghost 800 series. These include Mint, Tobacco, Beverage, Fruits, Sweets and even Cinnamon (shame I never received that one – never mind! lol). Massive shout out to Vapes Bars for sending these six over for the purposes of review. It’s very much appreciated.

As always, flavour is subjective. I’m just trying to share my own personal experiences in the hopes they act as a guide for what you, yourself may like or dislike.

A fresh Blueberry taste that will keep you refreshed throughout the day.

Wow! It looks like these flavours are going to be quite strong judging by first impressions.

There’s both a sweetness and sourness present during the initial inhale that punches its way through strongly on the way out, scooping up the candy like Blueberry as it does so.

The Blueberry carries its own tanginess and could almost pass as Bubble Gum for its texture. There are also strong back notes of that infamous energy drink, Red Bull thrown in.

A delicate layering of Koolada hits during the inhale and acts more to sooth the throat than hinder the overall flavour experience.

So the combination of intense flavour, sweetness and cooling agent all combine to offer a very smooth and refreshing vape. Just don’t expect an authentic fruity Blueberry taste. It’s more of a sweet/beverage inspired vape – even so, it’s incredibly moreish..

Prepare to go on a flavoured trip of earthy vape and sugary aftertaste. Experience a combination of robust flavours with rich Tobacco that has been coated with delightful caramel notes and infused with vanilla cream for silkiness.

Can’t say I liked the aroma produced by the mouthpiece when breaking open the vacuum sealed baggie. It has a synthetic, oily and quite frankly repugnant smell.

Thankfully the vape is a completely different experience. However, I personally get more of a creamy, percolated Coffee taste than any Caramel. It leaps out during the exhale.

With the inhale and as an aftertaste, there’s a rich, earthy and rather natural blend of Tobacco. Around mid exhale it joins forces with the Coffee to create something of a unique blend as far as disposable flavours go.

Running throughout the entire vape there’s a deft layering of sweetener which really helps to hold everything together. Again, Caramel Tobacco is a very smooth vape and the careful blending keeps everything fresh and interesting.

If you are the old fashioned type or you just love the fizzy taste of your Cola, then this is for you. Feel the fizz of freshly opened Cola with a flavour so carefully invented and blended to taste just like the soda.

For the best results take a nice long MTL inhale with Cola Ice. This will not only allow the sweeter notes to build but also provide the back of the throat with an effective cooling blast.

As is the case with many Cola inspired vapes that sweetness can be a bit overpowering, hanging on the palate and lingering on the taste buds for an extended period of time.

As flavoursome as Cola Ice is it does not contain any fizz. It’s once again a rather flat interpretation of the popular beverage. I wish there was a way of creating more of a fizzy effect without the need to assume that Koolada can take its place.

Still, the mixture of flavour intensity, sweetness and an icy cold blast will ensure this one’s popularity over the long hot Summer months. This isn’t your average minty vape! Explore a crisp and refreshing menthol aftertaste that lingers on the palate with an icy and strong delivery of your favourite mint flavour.

This isn’t your average packed disposable! E-juice was found leaking inside the sealed bag. It looked to be coming from the mouthpiece. Not really the best advert for any kind of leak free technology but given the volume manufactured is no doubt a one off “Dead On Arrival” disposable.

I did try to wipe it clean and attempt to vape but yeah! DOA. So Glacier Mint has been excluded from the score. A perfect blend of sweet and sour fruity flavours to lift your day!

This one contains plenty of sour back notes from the get go. The Koolada massages the rear of the throat during inhale and never over powers the vape. It will linger much longer too. As the name suggests, we get a medley of fruits all thrown together in one vape bowl.

I’m quite hard pressed to suggest which fruit dominates but Orange definitely throws out during the inhale and on shorter MTL tugs. In general it intermingles with the Grapefruit to produce a very refreshing taste.

What Raspberry content there is tends to lurk on the after taste with its associated sweetness. Raspberry Grapefruit Orange offers a very clean and tasty vape. If this can’t be classed as a classic Summer vape I don’t know what can!

It’s a very clever fusion of fruits with a taste that keeps on giving.

With each puff you get a burst of absolute astounding deliciousness of fresh and crisp natural Apple flavour with a dash of tanginess. A flavour that will leave you wanting more. The perfect blend of tartness, crispness and refreshing coolness.

There isn’t much in the way of cooling with Apple Ice and that’s going to please more people than others. As a consequence I’m left with a very clean, smooth vape and the resulting taste is pitched perfect.

The Apple is crisp, clean and very natural tasting with just the right amount of sweetener applied. The flavour lingers on the palate and remains for the after taste so there’s clearly been no skimping on concentrate with this one.

It’s good that it isn’t over powering either and the sourness produced during the inhale levels out perfectly on the way out. To add another dimension, the tangy nature of the fruit will tickle those taste buds and leave its mark on the tip of the tongue.

Apple Ice is a no nonsense crisp, natural tasting Apple vape. Any fan of the iconic green garden fruit is going to love this because it’s been very well crafted.

Battery Performance and Number Of Puffs

I got a whacking 7 hours use and flavour and cloud production was consistent throughout. Some disposables tend to suck some of the e-juice up into the mouthpiece during use but the Ghost 800 was a pleasant exception.

Something to note however is that the battery will outlast the 2ml juice capacity. I was experiencing a dry, burnt taste towards the last 20 minutes of use.

Based on an average of 90 puffs per hours the disposable pretty much lives up to its claim of 650 puffs. Good stuff, Vapes Bars.

A Note On Scratch and Check Authenticity

I carried out the scratch verification check on the Vapes Bars official website. It consists of a string of 16 numbers and unsurprisingly with my poor eyesight, failed a few times. In each case I had entered a single wrong digit – that was enough to trigger the failure.

In a day and age of fake, counterfeit disposables full marks to Vapes Bars for the added assurance their verification codes bring.

I scanned the bar code on the side of the box and that also brought up the official website address. A simple click and I was on the site.

These disposables offer an incredibly smooth inhale and that did impress me. The “duck bill” mouthpiece has been used before but the design tends to contribute to that smoothness. It also provides a very comfortable arrangement.

To say the Ghost range is packed with flavour might be something of an understatement. I was never disappointed. It’s clear that decent levels of concentrate have been applied to each.

To back this knowledge up, each disposable delivered a consistent, flavoursome vape every time.

Right up to the region of 650 puffs. So the battery performance was also on point – in fact out lasting the 2ml juice capacity within.

Flavour, performance and design. I can now officially tick those three boxes!

I think Vapes Bars have done a terrific job with the Ghost 800 series. The only thing I would suggest is maybe renaming them the Ghost 650 series. It’s less confusing to the end user..

Let me know if you have tried the Vapes Bars Ghost 800 range in the comments below!