The Vaporesso Osmall pod kit marks a welcome return to basics after a raft of releases in this particular vaping category.

There have been some aggressive changes over the last few years, to where it’s reached a point pod systems have become almost unrecognizable. The moment companies decided to utilize single 18650 batteries was very much a defining moment for the industry. The humble and discreet mouth to lung pod kit had mutated into a relative power house of cloud chucking proportion.

And the lines between vaping styles themselves have become very much blurred. Very often pod kits are able to appeal to direct lung vapers as well as those more comfortable with a cigarette style experience.

The Smok Fetch Pro being one such example.

So they’ve reached a point where they almost fall entirely away from the audience they were original intended for, I’m talking, of course about the virgin vaper. So has Vaporesso redressed the balance by turning the clock back to a time when vape devices were genuinely looked upon as smoke cessation tools? To when a pod looked like, well, a pod?

We’ve reviewed a whole host of Vaporesso vape kits, such as the Orca Solo Plus – the Target PM80 – the Vaporesso Degree and the impressive Gen mod.

I guess that would be my cue!

What Can We Expect From The Vaporesso Osmall Pod Kit?

We can expect the most basic of performances from the device. There’s no button bashing to be had either as the pod relies entirely on draw activation to function.

Despite a battery rating of only 350mAH the lower demand on power should also provide a sufficient life cycle. It appears there is only a 2ml capacity version available which falls comfortably in line with TPD requirements. Just as well really because you won’t be guzzling juice with this Oh so small puppy!

Vaporesso has provided us with plenty of colour options, and there’s something for everyone here with the no nonsense schemes on offer: Although one of the most basic of pod kits of recent months, the Vaporesso Osmall pod kit still has a few things to brag about. Probably more important are the addition of those oh so important safeguards against device failure.

Including the pod section this entire device weighs a mere 50G. That’s oh so light! Being entirely comprised of plastic and PCTG it may come as no surprise. It features an etched mosaic design across the front and back of the battery section designed to provide grip.

A tiny white LED is located on the rear panel in the centre which illuminates during circuit protection, charging, vaping and when removing the pod.

Curiously it does nothing to let you know the pod has been successfully connected. On the underside of this 13.4mm deep pod is the USB port. It’s your standard connection so no fast charging capabilities here – again, no real surprise.

Inside the battery there are two magnetic contacts that grab the pod into place. On either side of these the positive and negative contacts can be found.

The pod makes up 18G of the entire weight of the device and as with most is comprised of tough PCTG. It’s very translucent so viewing juice levels is extremely easy – full kudos to Vaporesso for getting that right. On the underside of the pod the two aligning magnetic contacts are visible and in the centre is the single fixed mouth to lung airflow inlet.

A bottom airflow that feeds the coil directly more often than not provides superior flavour production.

This is a side filling pod and I have to say that for a throw away includes a rather robust looking silicone stopper. It’s going to last the lifetime of the coil which itself has four generous size wicking ports.

Something else I’m hoping will assist with flavour production.

How Does The Vaporesso Osmall Pod Kit Perform?

First things first we need to fill the pod. The 1.2ohm coil is factory fitted so I can get away with skipping the “How To Fit The Coil” procedure. Ha! The pod is idiot proof and will fit either way into the battery section.

Once you’ve successfully filled the pod, leave it a good five to ten minutes prior to vaping.

This allows the juice to soak into the coil and cotton preventing an unnecessary dry hit – known as ‘priming your coil‘.

The test was carried out using Double Drip Raspberry Sherbet, a 50VG/50PG juice ratio, and I opted for the nicotine salt version.

I’ll be honest my initial vape reverted to a direct to lung pull, merely out of habit. You don’t want to be doing that yourself because you’ll experience the throat hit from hell lol!

Indeed, the device is suited only for mouth to lung and here it really does excel.

The raspberry content was focused and prominent on the exhale. It never tapered off either which was very impressive, leaving enough sweetness on the taste buds.

Cloud production was minimal as expected but enough to satisfy any budding newbie.

I found the restrictive qualities to be on point and the bottom airflow made a big difference to the clarity of flavour.

I wanted to see how the pod responded when changing flavour profiles.

Next I used Riot Squad Fresh Leaf which is a hybrid mix of freebase and salt nicotine and this was also a 50VG/50PG liquid mix.

Impressively it took around five or six pulls before this tobacco inspired profile began to shine – and shine it did! Very soon there was nothing to indicate that I had even been vaping a raspberry sherbet flavour.

This has to be contributed to the cotton combo being used by Vaporesso. I can’t stress enough how effective the flax cotton and non woven fabric is with this vertically mounted MTL coil.

What’s more, the flavour quality was better than some of the more powerful AIO pod kits out there at the moment.

A bold statement I know!

The battery held out for five hours of moderate to heavy use which isn’t bad given the capacity, during this time I vaped around 1.4ml of e liquid.

Again, the pod kit impressed me by only taking around an hour to fully charge from flat.

I never once felt the urge to reach for one of my more powerful cloud chucking devices, so that’s testament to how effective the Vaporesso Osmall pod kit is.

However it did tend to leak but this was only after a few days of testing and I constantly monitored, and thereafter it continued to show signs of minor leaking issues intermittently.

I deliberately dropped the device onto concrete a few times – being plastic, not a dent.

Neither did the pod separate from the battery section, proof, if needed, the magnetic contacts do a damn fine job.

I have to say the Vaporesso Osmall pod kit is the perfect jumping on point for any budding vaper. It’s a very accessible and straightforward way of pulling away from cigarettes.

Why would I say that?

Auto draw is an overlooked feature in my opinion, with the ability to mimic the smoking style plays a massive role in any successful transition.

The Vaporesso Osmall pod kit is around the same weight as a cigarette, but lighter than a pack of them, and being ultra pocket friendly is yet another major plus point. 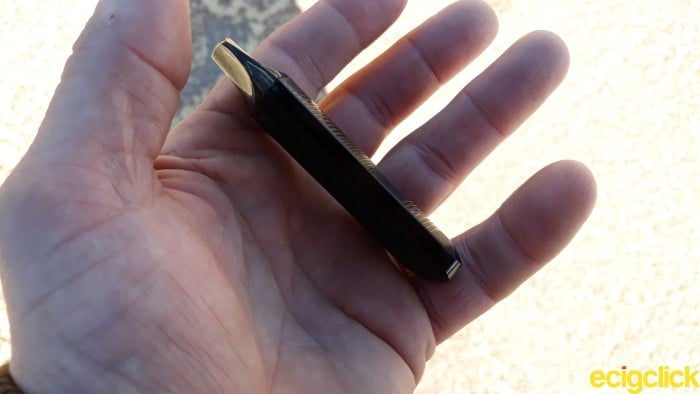 It’s very thin in comparison to other pod kits, so never feels clumsy while holding in the hand.

The mosaic etching on either side does provide a degree of grip, and personally, I found it gave the device some much needed character.

On a closing note it seems replacement pods are readily available for purchase as a pair. My coil is lasting well into a weeks regular use and the flavour is still hitting hard.

Although I never tested thicker juice ratios I’m still inclined to suggest sticking with 50VG/50PG density, simply for increased flavour and a way of increasing the inbuilt coils life span.

It’s one I would highly recommend to any newbie because it just ticks all the right boxes.