The Preco Tank By VZone Previewed

Something unusual now for you – this is the VZone Preco Tank. VZone have made a huge impact on the vape scene with their excellent Graffiti, Cultura and EMask mods.

The Preco is unusual as it is designed to be a low cost lightweight disposable sub ohm tank. The tank is made from Food grade Polycarbonate and Stainless Steel and apparently only weighs 16g. Plus the material is good for heat insulation. There is a 0.15ohm mesh coil installed in the tank and this is not replaceable. The point being this is like a pod – you throw it away when the coil is past its best. Which is targeting the no fuss, no mess type vaper. The top of the tank has a bung which you pull out to refill with e-liquid and the capacity is 3ml (there may have to be a 2ml version for the EU market due to the TPD regulations). It is 24mm in diameter so pretty similar to most sub ohm tanks nowadays and is built from an All In One construction. I wonder if this will be less prone to breaking!

The design also apparently minimises the condensation travelling up to the drip tip whilst vaping too.

The VZone website says that the Preco will save you money – I’m not too sure but they appear to be saying it will be the same price as a single mesh coil – without you having to pay out for a tank as well. There are 2 colours to choose from – Clear and Ash. Now environmental concerns aside this could be a good idea – it is similar to a pod which you can use on a Vape Mod.

Will you be purchasing the VZone Preco Tank? Let me know what you think in the comments below! 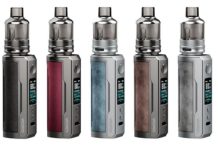