The Wotofo STNG MTL RDA is from a brand I find to be particularly good at creating high quality, mainstream Rebuildables. The Wotofo Profile RDA is one of the most popular Drippers on the market and they have recently obtained NexMesh meaning they own the rights to the OFRF NexMesh Sub-Ohm Tank which I highly recommend.

And they haven’t stopped there, recently releasing the Dyadic, a dual 18650 squonk-mod with side-filling action.

What Can We Expect From The STNG MTL RDA by Wotofo?

To show their diversity, the next item for me to take a look at comes in the form of a small 22mm Mouth-To-Lung Rebuildable Dripper, the STNG MTL RDA.

There seems to be a surge in MTL devices of late, which I’m actually quite excited about, I’ve been through the stage of large tanks and mods, but have come to enjoy a nice MTL vape from time to time.

So let’s crack on and have a look to see if this can make it onto our best MTL RDA list.

This device was sent for the purposes of review. As always, my views are my own. Wotofo have headed to Russia for help with the design of this device, by way of Russian YouTube reviewer, Uncle Stas at Vapor Place.

I hadn’t heard of him before but I checked out his channel (Vapor Place) and attempted to watch a review or two – Of course there’s a huge language barrier but he’s definitely a Vape Product reviewer. The first thing to stress is how this RDA is purely for Mouth to Lung (MTL vaping), unless you like a really restrictive Direct-To-Lung vape.

The Wotofo STNG is only 22mm in diameter with bottom airflow and a simple, 2-terminal post-less, spring-loaded deck, meaning its primarily designed for single-coil builds.

You get 2 drip-tips in the box, both using a 510 connection, and there is no option to use an 810 Drip-Tip. But being an MTL dripper, it makes sense to be shaped and styled in the way they are.

I’ve found both Drip-Tips are high quality, simple but smart looking and are nicely shaped to complement the RDA itself. But they may be a little too small for some – at least you can use your own 510 Drip-Tip. The airflow is fed from near the bottom of the STNG and is directed to the under-side of your coil, at the centre of the deck. There is only the one airflow hole on one side, which is adjustable of course.

Generally the airflow is exactly what you would expect from a Mouth-To-Lung device. I’ve mostly had my airflow set to nearly the minimum, without closing off the airflow completely. This gives me a very tight, cigarette-like’ draw that I enjoy. Even when wide open however, you can still enjoy a Mouth-To-Lung vape and the STNG isn’t noisy, whistle or turbulent whatsoever. It’s a nice, subtle, quiet vape.

The deck of the STNG is small but there is plenty of room to fit the kind of suitable coils you may use on any Mouth-To-Lung specific tank or RDA.

The deck features 2 terminals for the coils, making this a single-coil deck, with Spring loaded post clamps.

The airflow is positioned directly in the centre of the deck meaning the air is forced around the coil, and up through the drip-tip. Ideal for direct cooling to the coil. It also makes for a nice restrictive vape. There is also a nicely sized juice-well for your cotton. How Does The Wotofo STNG MTL RDA Perform?

To start with, you’ll want to make sure you’re using the right style coils. You could use any coil you like, but I would recommend trying both the 0.75Ω Clapton coil, and the 1.2Ω coil that are included and see what you prefer.

Following on from there, loosen the 2 deck screws.

They’re spring loaded but I’ve noticed they’re also a little short, meaning it’s easy to unscrew these too far and you get to experience the pain of refitting tiny screws into a tiny slot. Not ideal when you have shaky sausage fingers.

Ensuring the clamps are opened up enough (But not too much), its extremely simple to fit the coil, sliding in from the side of the clamp on each side, aligning the coil between the 2 posts, and directly over the airflow. At this point, trim the excess wire to ensure it won’t short against the barrel. I recommend pulsing the coil at a very low wattage to ensure there are no hot spots and that it’s heating nicely from the centre.

But if you prefer a spaced coil – crack on with that instead. Yes it can be a bit of a challenge wicking such a small coil, but once in place you’re good to go. And there’s plenty of room for your cotton on either side of the coil. I tended to cut the cotton around 5mm past the ends of the deck, and tuck inside. As much as I call the STNG a ‘Dripper’ you really can’t drip onto this RDA in the traditional way, unless you remove the drip tip.

This is due to the 3mm inner diameter of the drip-tip, which may be a problem for you if you prefer to drip from the top of the tip. In which case you may want to use your own drip-tips with a larger inner diameter. In my case, I enjoy using the drip tip, which means I have had to remove the barrel, to re-saturate the cotton. But being an MTL RDA, it’s not like you’re re-dripping every 3 pulls.

Using the included squonk pin, you get around the dripping issue when used on a preferred squonk mod. So out came the dusty Vandy Vape Pulse BF Squonk Mod. 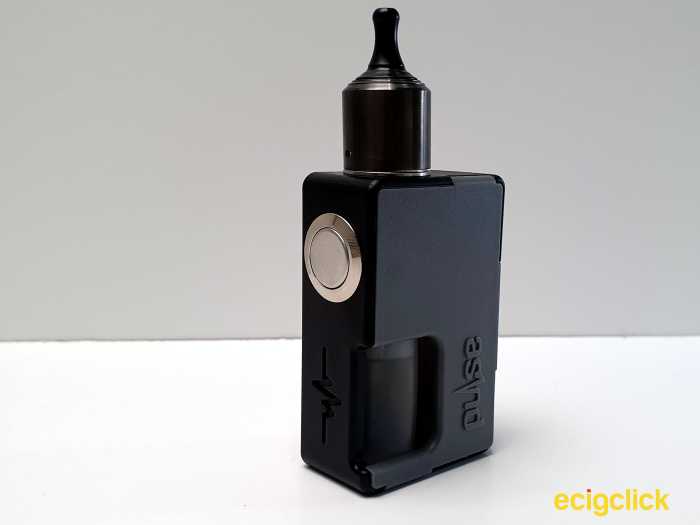 Squonking is a joy with the STNG MTL RDA. Fed from the bottom and flooding the coil and cotton with e-liquid. It is however quite easy to over-squonk which allows e-liquid to escape through the airflow slot. So keep an eye on that and ensure you don’t over-squonk!

For this review I used a number of Nic-Salt e-liquids, but more recently I’ve been enjoying the NicSalt range from Just Juice.

To be completely honest with you, regardless of which coil I used, the STNG delivers a nice flavour-filled vape.

Certainly better than a lot of Pod Style systems currently on the market offering a ‘Real’ MTL experience. I even gave some other MTL specific coils a try and they performed just the same. On a 1.05Ω build, with the airflow almost shut off completely at 15w, you get a nice little cloud which is slightly warm and nicely restrictive.

As I’m primarily a Direct-To-Lung vaper, who’s currently enjoying a bit of MTL from time to time, this has been an exciting device to test out. The STNG is well made, simple to build on considering its size and delivers nice flavour with a decent cloud to boot.

I’m not quite sure how popular MTL RDA’s are, I can see how an MTL specific RTA can be popular, but i’m still not convinced Mouth-To-Lung RDA’s have that much of a following.

That being said, the STNG does everything you could ask from a MTL device with only minor observations which could do with improvement.

Have you used the Wotofo STNG RDA? We would love to hear your thoughts in the comments below!