The Ehpro Kelpie RDA is the next in the Kelpie line up – a collaboration between Ehpro and the YouTube vape reviewer Vaping With Vic. The Kelpie RTA scored well in review here in May 2019 so will the RDA version be able to match this performance?

Will The Kelpie RDA Live Up To The RTA Version? Buy Now
So the main part of any RDA is the deck. This has a single coil deck and is similar in layout to the RTA version.

There are 4 clamp screws in total which should accommodate coil legs pointing in most different directions and you will only be using 2 clamps at a time.

In the centre of the deck is a curved honeycomb air outlet which feeds the air all around the coil.

To adjust the airflow turn the outer barrel to open or close the honeycomb airflow inlets.

The kit contents look pretty good including coils and cotton to get you building straight away.

Here is a video from Vic himself introducing the Kelpie RDA.

There are 3 colours to choose from: Stainless Steel, Black and Blue. This is a pretty basic looking RDA but could be a nice vape.

What do you think of the Ehpro Kelpie RDA? Let me know in the comments below! 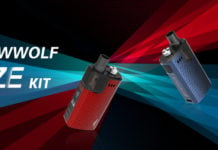 Geekvape Aegis Pod System Preview – Not Much To See Here – Yet!