It’s a crowded vape starter kit market to say the least and the new Vaptio Tyro will have to be very good indeed to get to the top of the extremely long list of contenders.

Tyro is Latin or old English for ‘beginner or novice‘ so the company has chosen the name well given this comes with both a DTL and MTL coil. This of course means absolute newcomers to vaping can try each style to see what suits them from chucking a few clouds to a tighter restricted draw. 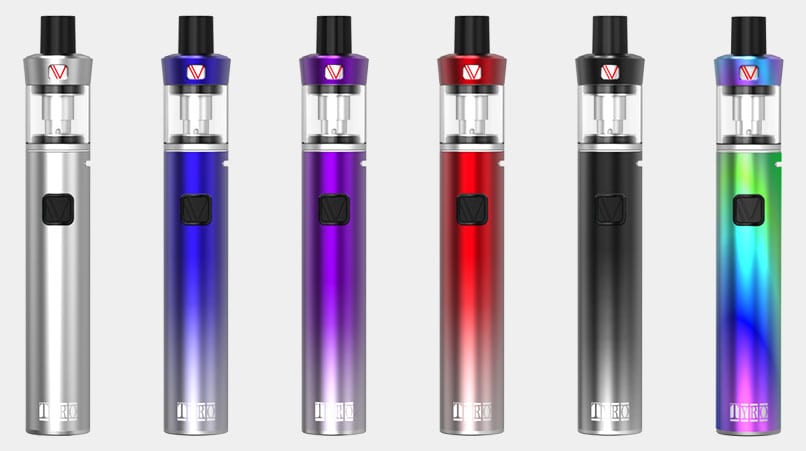 This is the first Vaptio kit I’ve ever used or indeed reviewed and given I’d heard such good things about the company I was intrigued to see what all the fuss was about.

It’s Name Is Latin For ‘Beginner Or Novice’ So Is The Tyro The Ideal Starter Kit?

We’ve reviewed a few of Vaptio’s set-ups: Gaz the Flat Cap Vaper quite liked the new Cosmo kit – our Michelle thought the Vaptio Solo F2 AIO was pretty good if a few niggles whilst Laura-ann was a little disappointed to say the least with the Capt’n 220 kit…so a bit of mixed bag there…

One thing is for sure the Vaptio Tyro starter kit is competitively priced – looks pretty cool – should be a cinch to use and comes in a range of colours: Black – Stainless Steel – Blue – Purple and Rainbow. A rather plain box with a clear window that does the job…mine was squashed during shipping and inside you’ll find: Vaptio has patented the fill system on the Tyro which some might feel is a bit of overkill. It’s simply a case of twisting the top of the tank just below the drip tip until the side fill port appears. It works very well but not something you’d call incredibly innovative. Another ‘unique selling point’ is being able to switch between the two styles of vaping: Mouth to Lung – MTL – and Direct To Lung – DTL. You do this by simply switching out the coil and closing or opening the airflow. Again not something we haven’t seen before. As to if this works we’ll look at later.

Find out more about DTL and MTL vaping styles. There’s no menu to worry about – simply charge – fill – vape, and it is quite small lengthwise for a pen style device so quite stealthy in the hand and easy to slip into your pocket or bag.

It has an 1500mAH internal battery which pumps out up to 25w and the chip inside recognises the resistance of your coil setting the power automatically…again nothing we haven’t seen before.

Vaptio describes this as an ‘All In One’ vape kit or AIO. However unlike the vast majority of these styles of vape kits, the Tyro’s tank isn’t permanently fixed to the battery. Indeed to swap out the coil you’ll need to remove the glass which for me says its’ not really an AIO…but hey that’s nit picking somewhat I suppose so let’s call it a semi AIO.

Though in the balance of fairness neither the tank nor the battery can be used independently with others…a semi semi AIO???

As I’ve said this is the first Vaptio vape kit I’ve reviewed and straight off the bat I’m impressed by the build and materials. This feels very solid in the hand – you can tell it’s a good quality kit put it that way and certainly not heavy, feeling comfortable to hold.

Both the airflow and the fill system have just the right amount of resistance and move easily enough. However you do need to twist the top cap quite a bit to fill …not an issue as once closed off it’s definitely airtight and so far leak proof. The glass pops on and off easily enough with decent O rings that give you confidence when out and about and the coils screw in and out reasonably well. I say reasonably – they can be a little difficult to line up and can be a little crunchy but nothing too worrying.

One tip I’ll offer is to make sure you tighten just a tad – only a tad! – more than finger tight as the first time I tried to vape it couldn’t fire as I hadn’t tightened the coil enough…silly schoolboy error on my part really I guess. The good news is I was able to tighten the coil without having to empty the juice – always a bonus.

Design wise it’s a pen style and as I always say there’s not a lot you can do to make them stand out unless you add garish colours – patterns and enough LED’s to attract aliens.

However and despite seeing the ‘fade’ design before on other similar mods – such as the awesome Innokin Endura T18-II – it looks cool. As does the tiny logo that peeps out from the fill port – very smart – as is the faded Vaptio logo on the bottom of the device. It’s actually quite a classy looking uncluttered design and I do like the understated yet pleasantly clicky fire button that lights when fired and again is the shape of the company logo.

Incidentally the USB port is high on the side of the mod and given it’s quite a slim device I don’t recommend charging standing up as it has a tendency to topple over. I have charged this on its side filled with e-liquid and the two hours it took saw no leaking. And yes you can vape on this whilst charging which is known as pass-through.

So well built – decent design and very comfortable in the hand.

How Does the Vaptio Tyro Kit Perform?

I’m a regular MTL and DTL vaper so this should be an ideal vape kit for me especially as I’ve reviewed a few setups that also claim to be able to switch between the styles. Sadly experience tells me this isn’t always the case.

So let’s look at the two coils separately starting with the MTL coil. For both coils I used the Raspberry Punk Grenade from Riot Squad – my third bottle since my review so I do know the flavour and clouds to say the least!

BTW the kit is compatible with coils from: the Vaptio Cosmo Tank – Nautilus Mini – Nautilus 2 and the Nautilus 2S…and as you’ll see next it might be good to experiment with those…

Flavour and Clouds From the MTL Coil

This has quite a high resistance of 1.60 ohms and fires between 10 to 15w and I read somewhere its ceramic – it certainly appears to be. Incidentally even with my super-powered tired old man’s reading glasses on that writing on the coils is tiny!

After filling and leaving to soak for a good 15 minutes my first vape wasn’t that impressive if I’m honest. There’s plenty of airflow options from wide open to one tiny hole however to get what I’d class as a ‘true MTL’ vape I had to close that single hole off almost shut. Then it was tight though given I like an airier MTL vape it still wasn’t that tight if I’m honest and certainly NOT what I’d call sucking a rugby ball through a hosepipe tight.

Flavour wise again I wasn’t impressed indeed the first word that came to mind wasn’t muted but ‘watery’ if you catch my drift. Sure there’s flavour but even almost shutting the airflow off completely didn’t make it pop.

Now three fills in there’s a little improvement but nowhere near enough for my taste buds to get excited by what is a real fruity flavoursome e-liquid when used in other similar set-ups. From that I can only think ceramic coils are so out-dated it’s untrue – it’s all about the mesh these days…

Vapour wise things look up a little but even with my 70:30 VG and PG mix and as you’d expect at that power there was vapour and enough I guess to keep you happy.

Flavour and Clouds From the DTL Coil

Given the, shall we say muffled flavour off the MTL coil, I wasn’t expecting any improvement from the 0.7ohm coil…OK maybe a wee bit given this was cotton rather than ceramic and sad to say I was right.

You’re pretty much getting twice the power into half the resistance so I hoped the flavour would pop – it didn’t…OK maybe slightly. 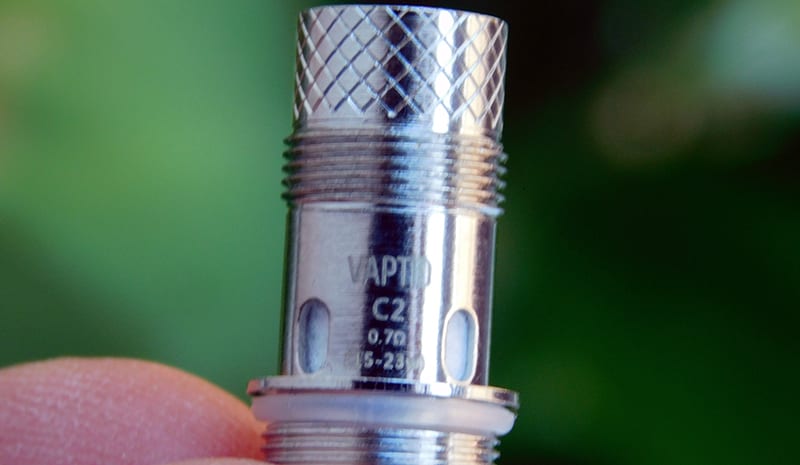 I wouldn’t say my tongue zinged instead it sent a puzzled message to my brain recognising the taste but wondering where all those tangy fruity notes had gone.

Again three fills in and nothing much has changed however as you might expect the clouds are certainly dense but no way would you win a cloud chucking comp.

Sadly I’m all out of Nautilus coils so was unable to check those against the Vaptio supplied ones. However having used those Aspire tanks often I reckon the flavour will be superior…but don’t hold me to that 😉

My last con being ‘nothing new‘ needs explaining especially given Vaptio has patented the fill system.

A quick look at the company’s website shows a plethora of similar looking vape kits so one has to ask the question what’s the point of bringing out the same old tired thing? Especially as someone there must have vaped on it and thought the flavour wasn’t up to scratch and shouted:

Hey! Why don’t we put some of those new mesh coils in it?

So despite that fancy dan fill port it’s just another pen style vape kit with 2 coils of different resistances and that really is it.

Up against others in its ‘class’ sure it stands out a little in the looks department and yes its well-built but so are many others.

So in all honesty I have to say there’s nothing new to see here move along. Let’s put it this way a couple of years ago and at a push early last year it might have held its own – but with mesh coils all the rage it is like that ceramic – a little out-dated…or should I say the Tyro is tired..?

Would I buy the Vaptio Tyro kit again if lost or damaged?