The Smok Novo 4 Mini is a brand-new device from one of the most familiar names in vaping.

Founded in 2010, SMOK have been at the forefront of vape tech, releasing some of the most popular devices used in the last few years. They also love a product sequel and the Novo is no different; will the Novo 4 Mini stand up to the test? Let’s have a look shall we!

What Can We Expect From The Novo 4 Mini by SMOK?

A discrete, pocketable pod mod device that works as an MTL and RDL. Lots of fun colours to pick between, with something suitable for everyone’s tastes. It works as a great transition from disposables or cigarettes, with very little to remember to do you’ll be up and running in no time.

This device was sent by SMOK for the purposes of review. As always, my opinions are my own. Let’s take a look at the SMOK Novo 4 Mini a little closer up.

It’s a small Mouth to Lung (MTL) and Restrictive Direct to Lung (RDL) device, very simple to set up and use, while being suitable for all levels of vaper.

If the terms MTL and DTL are unfamiliar to you – we tell you all about them in our Guide To Vape Styles.

No bells or whistles though, so some may find it a little basic but who doesn’t love a pod to keep around for those days where you don’t feel like doing much of anything. I know I do! There are 10 colours currently available, split up into 2 different versions. I received the Rasta Green Prismatic version and it’s very pretty! Not a big fan of the ‘Cobra’ design overall, but that’s just personal preference really.

The colours available are: As it’s a discrete device, it’s very comfortable to hold and fits nicely in the hand. Made of a metal body, with plastic front panels it’s lightweight and should be pretty good at taking any drops, although may show the occasional scratch.

I’ve dropped it a couple of times, because, for those of you who don’t know me, I’m incredibly accident prone and clumsy.

The Novo 4 Mini is auto draw only and there is no screen or buttons to change any settings. 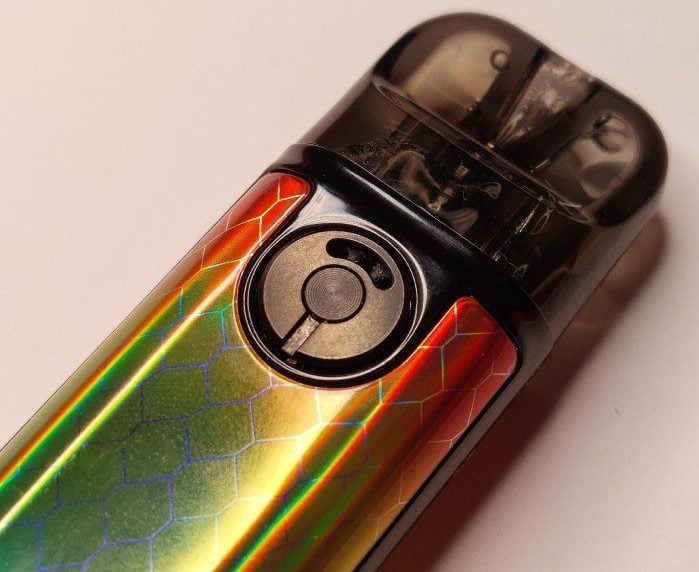 The chip can detect the coil that’s being used and it sets the appropriate wattage, meaning it’s very simple to get going.

With a 900mAh battery, there is a tiny LED light just below the airflow that indicates battery life, but the only issue with this is that you have to be using the device to see what level the battery is at. The lights are as follows:

The airflow is located at the top front of the device, just below where the pod sits. There are three small holes and to close these off you have to turn the little dial. I found it best to do this by using your finger tip, rather than nail as it can be a little tricky to get right with the latter.

The pods are a basic smoked plastic, holding 2ml of liquid. This is as standard and from my research there doesn’t seem to be a non-TPD version available (pods with more than 2ml capacity).

While it is vaped, it’s easy to see through and check the level. Only downside to this though, is that the pod does sit slightly into the mod so you can’t see below where the mod starts. To remove the pod, just pull it out of the mod and it will come off. It’s held in place by two strong magnets and it doesn’t seem to have any wiggle, which is nice.

In regards to the mouth piece, this is a duck billed shape and feels nice to use. I’m a fan of these styles, I tend to prefer them over the traditional round shape for an MTL pod kit.

The Nord Mini 4 is compatible with the LP1 coils, which have been used in previous Novo pod kits. By adding extra O-rings onto each coil, Smok have made these leak proof.

Quite nifty if you ask me and something that’s really important to a lot of us vapers! They are available in 4 different variations:

How To Replace the Novo 4 Mini Coil 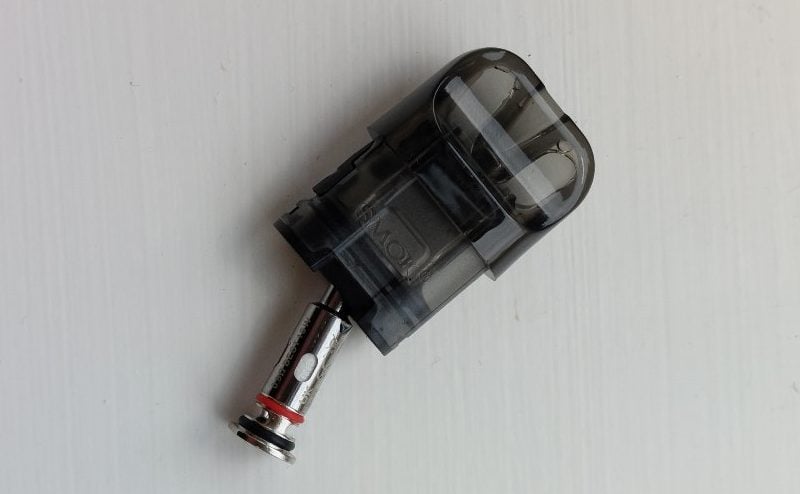 It’s very simple to replace the coils with this device, just follow these steps:

How To Fill The SMOK Novo 4 Mini Pod

Filling the pod is easy enough, with the filling port being located just on the side. One thing worth mentioning here though is that it’s a little difficult to pull out the bung if you don’t have nails, or have big fingers. When using a fresh coil, it’s important to let it sit for a few minutes to let the coil soak up the liquid. Priming the coil is really important, so put a couple of drops of liquid on each part of the coil itself with the cotton visible, this just helps to avoid any dry burning.

How Does the SMOK Novo 4 Mini perform?

Let’s give this a go with one of my favourite Salt Nic liquids – Berry Breeze by Tropic King in 50/50 PG/VG ratio.

The flavour from this coil is decent, it coats the tongue and you can notice all the different flavour notes although it can get a little muddy.

I can’t say this is the best flavour from a device like this though unfortunately, but it’s certainly not bad.

It’s possible to use this for RDL and MTL vaping styles, personally I found better flavour using it as a restricted direct to lung. Closing down the airflow to only two holes improves the flavour a touch, closing to only one doesn’t make a lot of difference though.

It’s a very smooth experience, the clouds aren’t extreme and probably just a little more than the average MTL device.

The draw is great on this device, at least for me. For a true MTL fan, this may be a little on the airy side. There’s not a particularly noticeable difference between 3 holes and being completely closed off though.

This isn’t a good thing for the more advanced vapers, but for those who are beginning their vaping journey this shouldn’t be an issue. The Novo 4 Mini is not a juice guzzler. Starting with a full pod, I’d only need to fill up once during the day. This is on basis that I’m using it during a standard work day though; on a weekend I would probably need a second top up towards the end of the day.

I also found that I got two weeks of basic use out of each coil, this may decrease a little depending on your own vaping style though.

Does The SMOK Novo 4 Mini Leak?

I’ve not had any leaking at all from this kit. To test it, I left it alone, unused, for 5 days. Usually if you leave a device unused for a while it starts to leak, but from the Novo 4 Mini? Zilch, nothing. Not even a little droplet. This really surprised me, but it’s nice to see this improvement.

The battery life has been good, I wasn’t using this heavily, just mainly throughout the day and then some evenings, so pretty light usage. 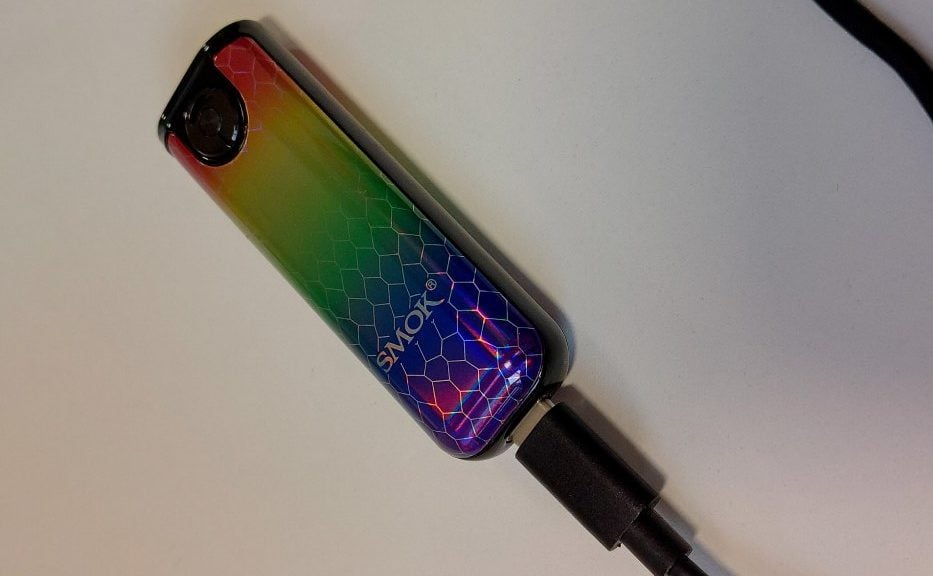 So far I’ve managed to get an easy days’ worth of use out of one charge, only needing to charge in the evening as required. The Novo 4 Mini has a battery capacity of 900mAh, taking around 45 minutes to fully charge from dead.

The charging port is located at the bottom of the mod, meaning you have to lie it down to charge. Not a fan of this! What Could Be Improved?

There are a few things that I think could be improved here. Mainly it would be nice to see a slightly different version, maybe a little more ‘up market’ so a metal version would work quite nicely.

The LP1 coils could do with a little tweaking, to get a little more flavour would be a bonus especially in such a packed market. Potentially a slightly bigger battery would be good too, but that’s purely subjective and not a desperate need.

Another thing, the charging port needs to really be on the side and not the base.

I’ve always been a bit dubious about Smok, they tend to release a lot of products yearly and their quality control has not been 100% up to scratch at times.

Despite any reservations, I must say that I’m pleasantly surprised and pleased with the Novo 4 Mini. It’s a great device just to chuck in your bag or pocket for a day out.

There are other alternatives that do provide slightly better flavour, but as a cheaper alternative there’s nothing wrong here!

Did you buy the SMOK Novo 4 Mini kit? Have you tried it? Or maybe you have a question? Let us know what you thought in the comments below.